The Usos Are Set For A Big Title Win 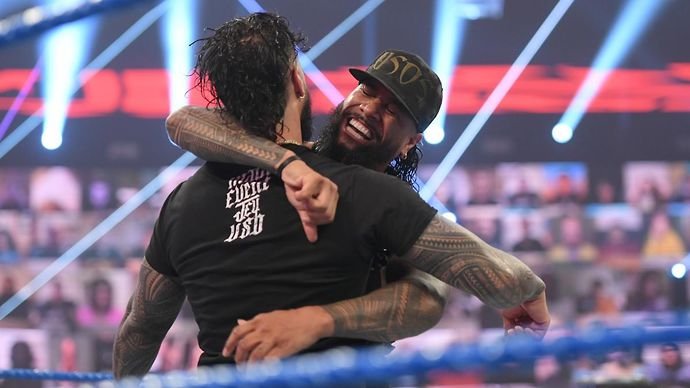 Jimmy Uso finally returned to Smackdown last week after a knee injury that took him over 12 months at Wrestlemania 36. Jimmy Uso had a little bit of altercation with his brother Jey and his cousin Roman Reigns. The last time we saw Jimmy Uso was at Hell in A Cell last year when Roman Reigns putting Jimmy Uso to sleep after he delivered a guillotine to Jimmy.

According to WrestlingNews.co, they were told that the next several months are planned for Reigns and his faction to dominate Smackdown. WWE has big plans for Jimmy & Jey to win the Smackdown Tag Team Titles really soon.

The Usos are a 6 times Tag Team Champions in WWE. The last time they won the tag titles was at Elimination Chamber 2019, where they beat the team of Shane Mcmahon & The Miz in a good back & forth match to win their fourth Smackdown Tag Team Titles. they held the titles for 51 days before they dropped the titles to Hardy Boyz.

It should be noted that The Usos might win the Smackdown Tag Team Titles back from a babyface team.

The heel duo Robert Roode & Dolph Ziggler or usually known as “Dirty Dawgs” are the current Smackdown Tag Team Titles. They would need to drop the Smackdown Tag Titles to a face tag team soon. Dirty Dawgs are scheduled to face the Father-Son team of Dominik & Rey Mysterio at Wrestlemania Backlash this Sunday, and if these reports are true, they could lose the gold as soon as this weekend.