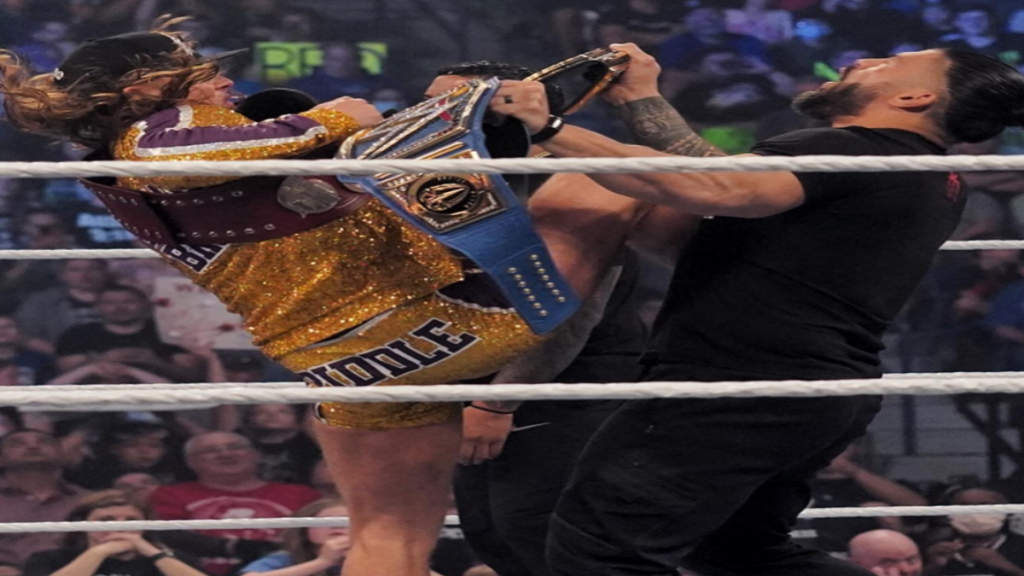 Tonight on Smackdown: RK-Bro confronts the Bloodline. How will The Usos respond? Sasha Banks and Naomi defend the Women’s Tag Team Titles against Natalya and Shayna Bayzler. Will the Boss and Glow continue to reign or will we see new champions? And, Kofi Kingston takes on Butch as he looks to avenge last week’s loss. Will Kingston come out on top or will the unstable Butch defeat the New Day member?

GREAT: RK-Bro calls out the Usos for avoiding a tag title unification match. As Orton is trash-talking the Usos for not making their own decisions, Sami Zayn comes out to speak on behalf of the Bloodline. Painting Zayn into a corner, Orton challenges Zayn to have a match with Riddle, if Riddle wins then RK-Bro gets their match with The Usos. As Zayn attempts to weasel his way out of the match Adam Pearce walks out to confirm the match will indeed happen next.

GREAT: Sami Zayn vs Riddle. Despite Orton’s hopes, Michael Cole confirmed this match would not impact a potential match with The Usos. Zayn gained momentum after he knocked Riddle off the ring corner and into the barricades. Riddle turned things around by hitting Zayn with a knee to the face as he jumped from the corner of the ring. In typical Sami Zayn fashion, he attempted to win this match via countout, but Riddle barely beat it out. Riddle delivered a Bro Derek to Zayn to win the match.

Back in the Bloodline’s dressing room, Roman Reigns and the Usos talk about how they are sick of having RK-Bro on Smackdown.

GOOD: Raquel Rodriguez vs Ronda Rousey for the Smackdown Women’s Championship. Raquel Rodriguez put her power on full display, slamming Rousey several times, leading to several near falls. Rousey responded by going to her submission holds. Just as Rodriguez was going for her finisher, Rousey rolled her up to retain.

Shotzi and Aliyah argue backstage about who deserves the next shot at the women’s title.

ABOVE AVERAGE: Kayla Braxton interviews Madcap Moss about his victory over Happy Corbin. Just as Moss gets into his aspirations, Corbin attacks Moss from behind with a chair. Corbin finishes the segment by using the Andre the Giant trophy as a weapon in a final, brutal move on Madcap Moss. Just before Moss is wheeled into the back of an ambulance, Happy Corbin sneaks in a bad joke to mock Moss.

RATING WORD: Sasha Banks and Naomi vs Natalya and Shayna Bayzler for the Women’s Tag Team Championships. Bayzler and Natalya effectively double-teamed Banks, hurting her leg and preventing her from tagging in Naomi. Eventually, Naomi got the tag and turned the match around. Bayzler nearly got the pin and the titles but the referee caught Natalya interfering. In the end, the champs retained.

After a pep talk from Richochet, Drew Gulak promises to put Gunther in his place the next time they meet. After hearing this, Gunther tosses Gulak into a door before walking away.

GOOD: RK-Bro demands a response from the Bloodline for their title unification match. After the Usos accept, Riddle takes the promo to the next level and hits Roman Reigns with a knee to the face out of nowhere. RK-Bro and the Usos will have their match next week on Smackdown.

Overall, this was a good Smackdown as several storylines were advanced and a few good matches happened. Ronda Rousey promised to be a fighting champion and made due on that promise as she issued an open challenge for the title. Recent call-up, Raquel Rodriguez, answered the challenge and gave the champ a run for her money but was ultimately unable to dethrone Rousey. Challengers for the Smackdown Women’s Championship are plentiful, as both Aliyah and Shotzi both want a shot at the title. Meanwhile, Shayna Bayzler and Natalia had their shot at the tag titles, hoping to weaken their opponents by targeting the leg of Banks and the arm of Naomi. It wasn’t enough, however, as Sasha Banks and Naomi were able to retain. Butch faced Kofi Kingston and came out with the victory, thanks to well-timed distractions by Ridge Holland and Sheamus. RK-Bro was able to secure their title unification match with The Usos, after defeating Sami Zayn and confronting the Bloodline to end the show. Riddle even got in a shot at the Tribal Chief with a kick to the face. Zayn continues to have an unclear relationship with the Bloodline, simultaneously acting as their gatekeeper while also denying that he has an official role within the group. And the feud between Happy Corbin and Madcap Moss continues, this time resulting in Moss being hauled off in an ambulance.