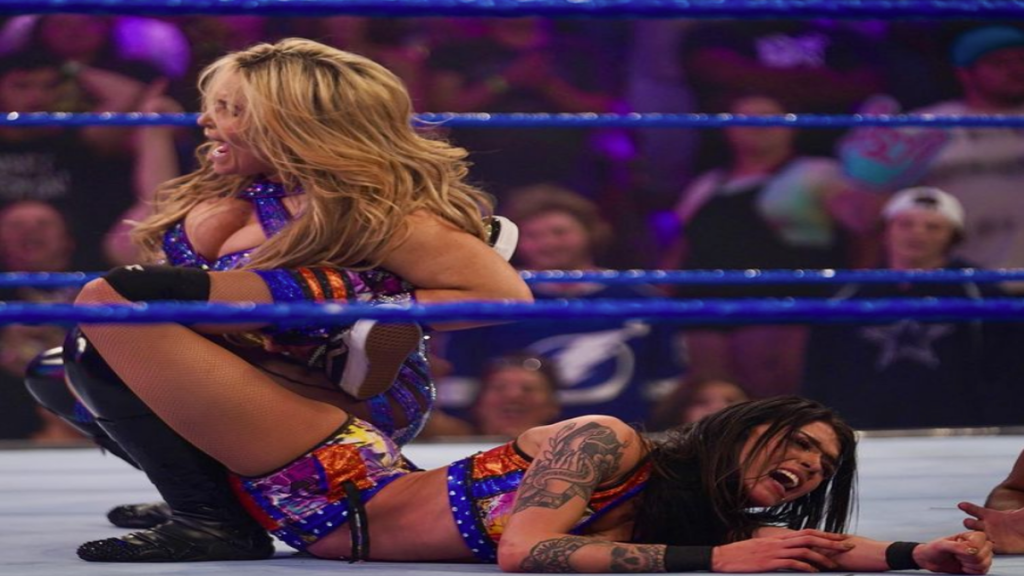 On this week’s episode of NXT 2.0: Natalya takes on Cora Jade. Will Nattie prove why she is the BOAT or will Jade triumph over her former idol? Toxic Attraction defends the NXT Women’s Tag Team Championships against the team of Wendy Choo and Roxanne Perez. Will Jacy Jayne and Gigi Dolin retain the gold or will Choo and Perez continue to torment Toxic Attraction? Alba Fyre is in action against an unnamed opponent. Will Fyre continue her winning ways while wrestling under a new name? And finally, the NXT Women’s Breakout Tournament gets underway. Who among the newcomers will make a name for themselves in the women’s division?

GOOD: Toxic Attraction vs Wendy Choo and Roxanne Perez for the NXT Women’s Tag Titles. The challengers had a surprise to start the match as Choo hit the champs with a cross body from the top rope. Perez and Choo had the advantage early on but Jayne and Doin fought their way back. In the end, a distraction from Mandy Rose allowed Toxic Attraction to retain the titles.

Grayson Waller and Tiffany Stratton forget their troubles with a shopping spree.

Roderick Strong upsets the other members of Diamond Mine by adding a new member to the group, Damon Kemp.

With Bodie Haywood translating, Sarray tells Andre Chase how she wants to team up with him to face Tiffany Stratton and Grayson Waller.

AVERAGE: Fallon Henley vs Sloane Jacobs. In round 1 of the Women’s Breakout Tournament, Henley controlled the pace against the young Jacobs. Jacobs got some shots in during the middle of the match but Henley’s experience was the deciding factor. With the support of Briggs and Jensen, Fallon Henley became the first superstar to advance to the next round.

Santos Escobar and Legado Del Fantasma, in a backstage interview, promised consequences for AJ Galante and anyone else who messes with La Familia. In response, Tony D’Angelo and his minions abduct Cruz Del Toro.

ABOVE AVERAGE: Alba Fyre vs Amari Miller. Despite creative offense from Miller in her return, Fyre was too much to handle. A Fireball and a move from the top rope finished off Miller.

Carmelo Hayes and Trick Williams get locked out of the performance center by Solo Sikoa.

Cora Jade promises she will defeat Natalya and prove she belongs in the women’s division.

GOOD: Solo Sikoa says he doesn’t care who wins the title match between Cameron Grimes and Carmelo Hayes, he wants the next shot at the title. Grimes tells Sikoa he will get his opportunity. As Sikoa leaves the ring, Trick Williams and Carmelo Hayes attack Grimes. Before the attack gets too out of control, Sikoa comes to the rescue of North American champion Cameron Grimes.

Tony D’Angelo and Santos Escobar speak on the phone about the feud the two of them have been in. The two agree to settle their dispute in the ring.

GOOD: Tiffany Stratton and Grayson Waller vs Sarray and Andre Chase. Chase held the advantage early on, forcing Waller to tag in Stratton. Stratton immediately ran out of the ring and back in hoping to gain an advantage over Sarray but Sarray countered with a submission hold. As Sarray was being pinned by Stratton, Bodhi Hayward let off an air horn, inducing Stratton to attack Hayward. The distraction allowed Sarray to roll up Stratton for the victory.

Ivy Nile leads the workout challenge she has been leading all throughout the evening.

GOOD: Nikkita Lyons vs Arianna Grace in a round 1 matchup in the NXT Women’s Breakout Tournament. Knowing she was the underdog, Grace went with the strategy of targeting Lyons’ arm in an effort to even the odds. Despite this, Lyons still had a huge strength advantage, hitting Grace with a German Suplex and finishing the job with the splits onto Grace.

The Viking Raiders call out the Creed Brothers and say they will not lose ever again in NXT.

GREAT: Natalya vs Cora Jade. After landing a hurricanrana, Jade attempted to use Natalya’s own move against her, but Natalya reached the ropes and got out of the ring. Natalya nearly paid the price for her ego, as she was nearly rolled up after she stepped on Cora Jade. later on, Natalya began to intensely target Jade’s leg, which proved to be a crucial point in the match. The damage to Jade’s knee prevented her from holding Natalya in a sharpshooter and kept Jade from executing a move from the top rope. In the end, the damaged leg did Jade in, as she was unable to break out of a sharpshooter that Natalya put her in.

Overall, this was a good episode of NXT 2.0 as several storylines were advanced and featured an entertaining main event. Cora Jade faced off with her former idol Natalya to end the show and the youngling put up a good fight against the BOAT. Natalya cleverly targeted Jade’s leg and this move allowed her to submit Jade. The NXT Women’s Breakout Tournament got underway as Nikkita Lyons and Fallon Henly both advanced to the next round. Wendy Choo and Roxanne Perez were unable to dethrone Toxic Attraction for the Women’s Tag Titles, thanks to interference from Mandy Rose. In a mixed tag match, the team of Sarray and Andre Chase defeated Tiffany Stratton and Grayson Waller. Several storylines were advanced this week: Tony D’Angelo will face Santos Escobar, Solo Sikoa will face the winner of the Carmelo Hayes-Cameron Grimes match, and Von Wagner continues to feud with Ikeman Jiro. Also, the Creed Brothers will face the Viking Raiders next week.  Amari Miller made her return to the ring in a loss to the rebranded Alba Fyre. Most of the matches were fine, with the big theme of this week being the advancement of stories and setting up future matches.