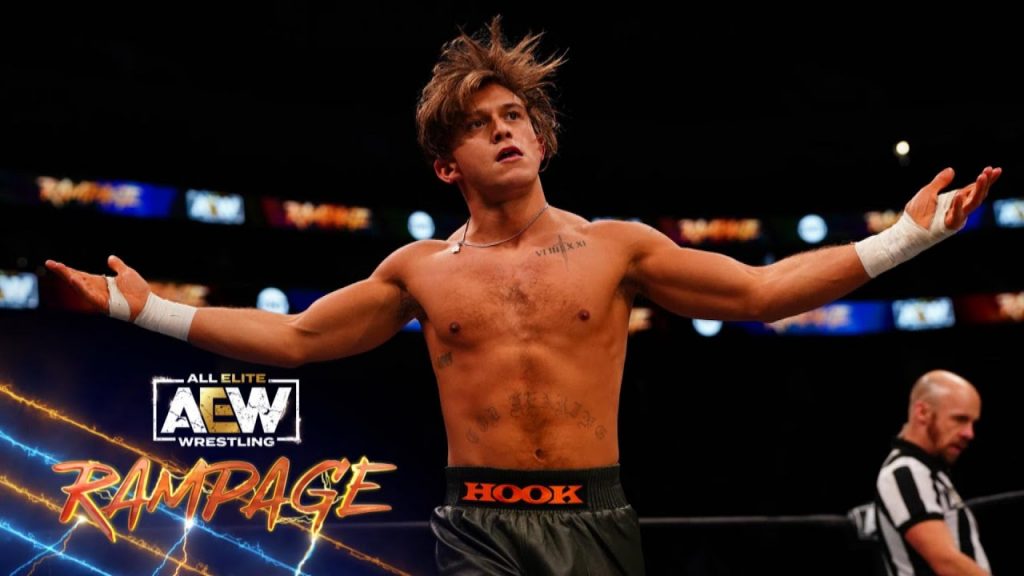 Preview: From Austin Texas it is round two of AEW action this week! The fastest hour in professional wrestling is coming up next, and we’ve got a super fun card to look forward to. The Murderhawk Monster makes his return to television this week, ReDragon is in action against the Dark Order, and we’ll hear from Jay Lethal following his loss to Adam Cole on Dynamite.

GREAT Lance Archer vs. Dustin Rhodes: Lance Archer walks down the aisle with some kind of enhancement talent draped over his shoulder. Dustin Rhodes chases him down and the enhancement talent scatters as Dan Lambert slithers down the ramp. Archer is all over Rhodes, and rips the turnbuckle pad off of one of the corners as Dustin writhes in pain on the ground. Rhodes attempts a destroyer off the apron on the outside and that was as close as he’s been to anything resembling offense thus far. The man known as the Murderhawk Monster is firmly in control. We hit our first commercial break and Archer is still dominant. Out of the break, nothing has changed except that Archer’s left boot is unlaced which could play a role in the outcome of this contest. Dustin finds a second wind and delivers a pair of clotheslines, followed by a kneeling uppercut for his first true offense of the contest. Archer quickly regains the edge with a massive shoulder block, but gets overzealous in the corner, and Dustin Rhodes is starting to finally look like he might be in this one too. Rhodes scores a Cross-Rhodes a la his brother for the first near fall of the match, but after the kickout Archer re-asserts his dominance with a full-nelson-side slam for the ages. Archer seeks the exposed turnbuckle but is reversed into it himself! Rhodes goes for a backslide cover and gets the 3 count!

GOOD Post match scrum: Archer throws Rhodes into the steps and he’s busted wide open. The ring is surrounded by Dan Lambert, The Men of the Year as well as Lance Archer and Rhodes is isolated. Members of the newly christened, “Rhodes Wrestling Academy,” attempt to defend their coach Dustin, but it is all for naught and he is driven through a table at ringside by the Murderhawk Monster to end the segment.

Jay Lethal Backstage interview: Jay Lethal is disappointed with his loss from last week and he jokes that it is, “back to the drawing board,” He’s got some, “thinking to do..” and there has to be a, “Better way.” This segment was too short to rate but it was fun, and I’m excited to see where they go with Jay Lethal.

AVERAGE Fuego Del Sol in ring promo: Fuego starts the promo in the ring and starts with the classic he, “know’s he’s undersized and an underdog,” stuff. He reminds us of when the fans chanted his name, in some of his underdog spots against Miro. Then he calls out to anyone and everyone and says he’s ready to fight. The lights go out, and when they come back on all three members of the House of Black are in the ring, and Taz predicts it will be a “massacre.” Taz was right, it is a massacre. Brody King lands a Fire-Thunder-Driver and Malakai Black and Buddy Matthews look on in enjoyment. On their way up the ramp they are confronted by the Dark Order and it is an interesting discussion involving no physicality to end the segment.

The Men of the Year with Dan Lambert Backstage Promo: Lambert announces that the TNT title is no longer subject to the “Open Challenge” rule. Scorpio Sky drops a hilarious line about people trying to break the, “Skyvinci Code,” and that is the end of that. Too short to rate.

GREAT ReDragon vs. 5 and 10 of the Dark Order: O’Reilly and Angels start in the ring and KOR is all over him, but as soon as Angels sees a gap he lands the hot tag to 10 who comes in scorching. 10 drops both Bobby Fish and Kyle O’Reilly as we head to our first Picture in Picture break. Inside pic in pic, 10 still looks great until ReDragon uses some shady tactics to bring down the young prospect. Near the end of the break Bobby Fish has 10 grounded in the ring and is working his left knee. Fish tags in O’Reilly who continues to go to work on that left knee. Fish is using strikes to break down the leg, and O’Reily his grappling, targeting the same knee. It is cool to see a classic limb targeting strategy employed by ReDragon, there’s no doubt about how well travelled and versed these two are. 10 finally manages to tag in 5, aka Alan Angels and he lands a double crossbody before clearing the ring to the adulation of the crowd. Angels tries an exploder suplex but Kyle O’Reilly manages to reverse it into a guillotine choke. 10, spinebusters Bobby Fish into 5 and Kyle O’Reilly to break the hold, but that won’t be nearly enough. ReDragon lands Chasing-the-Dragon on Angels and that is a ballgame.

Result: ReDragon by Pinfall via Chasing The Dragon

GOOD Tag Team Title Heist: Jungle Boy’s music hits and Jurrassic Express are on their way as ReDragon tries to lay in a post match beat down on the numbered members of the Dark Order. Adam Cole sneaks in and grabs the Tag Titles held by Jurassic Express. Looks like we have a belt thief on our hands.

Nyla Rose vs Madi Wrenkowski: Nyla is all over Madi out of the gates. Beast Bomb, over. That was a squash if I’ve ever seen one. Too short to rate.

GOOD QT Marshall presents a certificate of accomplishment to Hook: QT starts the segment in the ring and then Action Bronson overtakes our speakers and the crowd pops heavily for the kid that is Hook. He strolls to the ring in a hoodie and the fans are not having QT Marshall. Hook’s expression hasn’t changed and he’s been on this screen for a long while. The certificate means about as much to Hook as it does anyone else. Hook throws Aaron Solo head first through the award and walks away. Danhausen is at the top of the ramp, he tries to curse Hook, but Hook is unbothered. We end the segments with laughs from commentary, and deservedly so.. I mean, I was laughing.

GREAT Swerve Strickland vs Ricky Starks for the FTW Championship: Swerve enters first to a raucous reception and Ricky is on his way to one of his own. The reception for Ricky is properly more mixed but it’s undeniable the guy is over. Starks is accompanied by Hobbs and Taz is on commentary. They are trying to sell the fact that this is Starks’ adopted hometown but this is without question Swerve’s House. The match starts slow before Strickland gains the advantage. The strikes are snug, and both Swerve and Starks are as game as could be. The chants for Strickland rain down from the crowd before he is slammed into the second turnbuckle headfirst. During commercial Starks has the edge but this is anyone’s ballgame at this point. Out of the break Starks has Swerve grounded, but Swerve manages to get back to his feet and lands a massive flying knee. Swerve hits a diving shoulder block to a seated Starks and he is feeling it. Strickland follows with a rolling flatliner and nearly wins the match. Starks tries for “Roshambo,” but misses and the action spills to the outside. They work their way back in the ring and Swerve has a chance. Unfortunately; the referee is briefly distracted and Powerhouse Hobbs lays out Strickland with a giant shoulder block of his own. Roshambo connects this time and Swerve is pinned. As team Taz begins to celebrate Keith Lee clears the ramp. The crowd chants, “Oh Bask in His Glory,” as Lee and Swerve trade punches with members of Team Taz. The entire referee crew hits the ring to clear this chaotic scene but there is nothing anyone can do. It looks like Hobbs and Lee is coming soon and that is something I couldn’t be more excited for.

Overall: This was another entertaining show from AEW, say what you want, but they’ve brought 3 hours a week of entertaining wrestling for over a year now. While Rampage doesn’t usually live up to Dynamite (and this one didn’t either) this was a super entertaining episode. Strickland and Starks was a really fun match in the main event and the whole hour was nicely consistent. Both ReDragon and the Dark Order team they faced brought it in their match, and it was awesome to see Lance Archer and Dustin Rhodes back on primetime television. There are so many great active storylines going in AEW right now, I can only hope they can parlay this into more fun on next weeks’ Rampage and Dynamite respectively. Oh yeah, Hook is still no joke. This isn’t lightning in a bottle, Hook, has “It,” Yes that “It,” the cliche proverbial, “It,” we’ve all heard about our whole lives. Thats it.