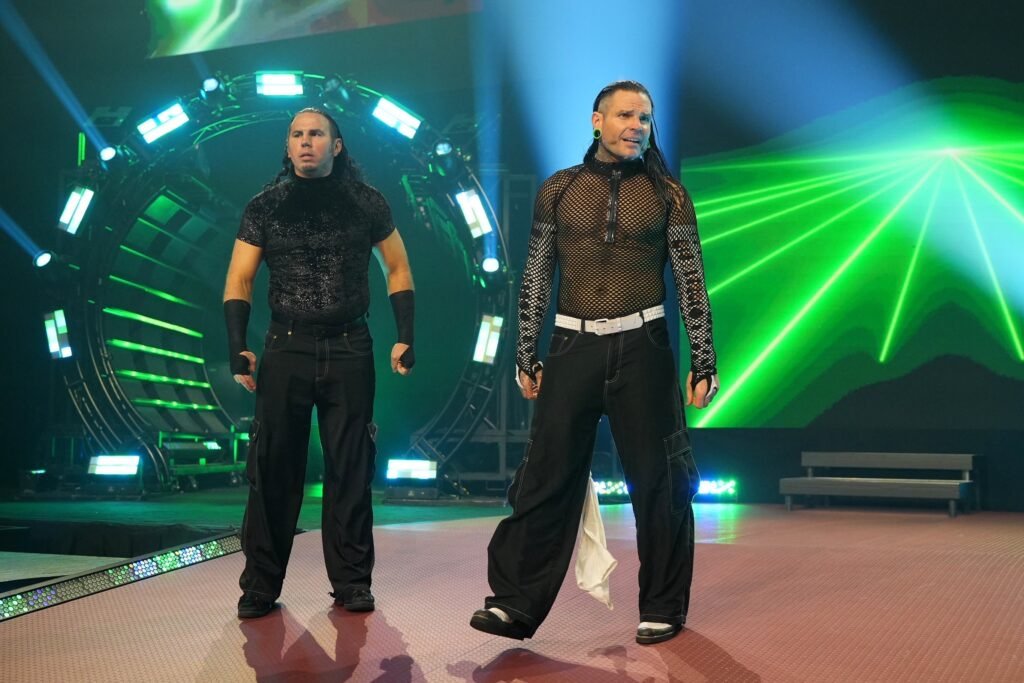 Jeff Hardy will make his AEW debut tonight as he will team with his brother Matt to take on the team of Private Party:

All Elite Wrestling have sent Wrestling Republic the following press release in the past few minutes:

— After reuniting for the first time on national TV in three years, Matt and Jeff Hardy face Private Party on a stacked St. Patrick’s Day Slam —
March 16, 2022 –AEW CEO, GM and Head of Creative Tony Khan announced that the newly reunited Matt and Jeff Hardy will make their AEW tag team debut on tonight’s AEW: Dynamite, live from the Freeman Coliseum in San Antonio. Together again on national TV for the first time in three years, the Hardys are seeking revenge against Private Party’s Isiah Kassidy and Marq Quen for their shocking betrayal of Matt last week. The AEW debut of Matt and Jeff Hardy elevates an already stacked “St. Patrick’s Day Slam” edition of the red hot AEW: Dynamite, which was the No. 1 show on cable last Wednesday.

Fans got their first glimpse of the Charismatic Enigma in AEW last week when Jeff Hardy saved his brother Matt from a beatdown at the turncoat hands of Kassidy, Quen and the other members of the AHFO. The Hardys later stepped up to assist Darby Allin and Sting from being outnumbered against the AFO on the March 11 edition of AEW: Rampage. Matt warned his former proteges, “When you come for the Legit Kings, you best not miss.”
“It was incredible to hear the huge pop from the crowd when the Hardys’ music hit, and to see Jeff Hardy reunited with Matt at AEW: Dynamite last week was an amazing moment for fans around the world,” said Tony Khan, CEO, GM and Head of Creative of AEW. “Jeff Hardy transcends time and is associated with some of wrestling’s most iconic moments. Reuniting the Hardys and bringing their encyclopedia of experience to AEW will give fans another exciting chapter in Matt and Jeff’s storied legacy in wrestling. Isiah Kassidy and Marq Quen turning on Matt Hardy, a wrestler they grew up idolizing, is a betrayal that cuts deep, and now Isiah and Marq will face the brothers who inspired their careers.

This will be a battle of two of the most innovative tag teams today – Private Party vs. Matt and Jeff Hardy tonight on AEW: Dynamite.”

Tonight’s show also features AEW World Champion Hangman Page, with AEW World Tag Team Champions Jungle Boy and Luchasaurus, teaming to battle Adam Cole and reDRagon (Bobby Fish and Kyle O’Reilly). “The Face of the Revolution” Wardlow challenges new TNT Champion Scorpio Sky, with Dan Lambert in his corner, for the title. The Jericho Appreciation Society, featuring Chris Jericho, 2point0, Daniel Garcia and Jake Hager, will have their official commencement. Plus, Bryan Danielson and Jon Moxley join forces with William Regal at their side once again to take on Best Friends’ Chuck Taylor and Wheeler Yuta. And, nearly one year to the day of their wild Lights Out Match at last year’s St. Patrick’s Day Slam, Dr. Britt Baker, D.M.D., and Thunder Rosa meet inside a Steel Cage with the AEW Women’s World Championship on the line.