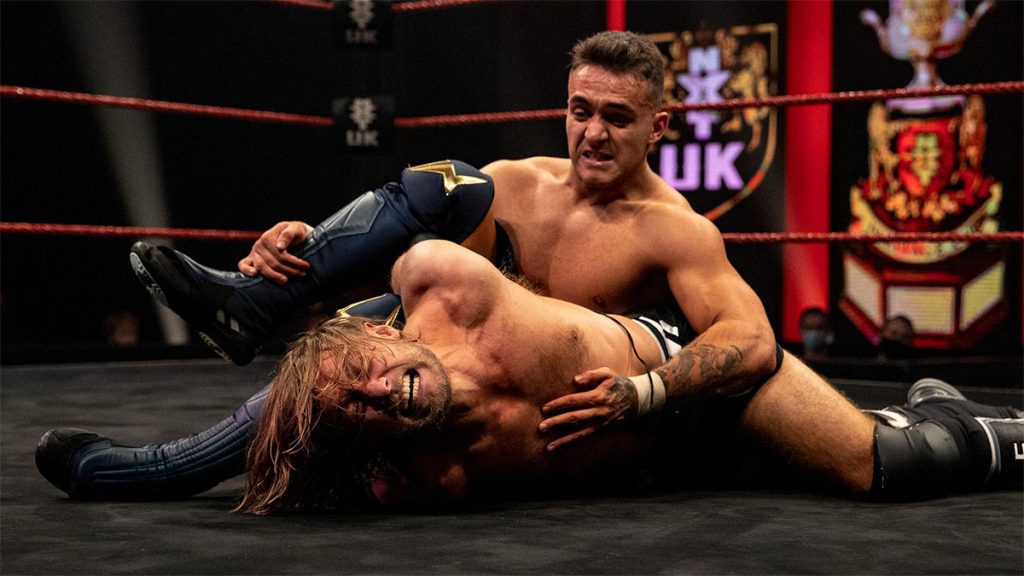 Personally disliked the idea of keeping the others involved in the feud backstage, minimal involvement in the entrances would have been nice. This match was truly a strong opener that had a clash of styles in Joe Coffey’s agility and strength to Charles’ striking and technical ability. I haven’t seen Charles compete yet and what a match to be the first of his I see. Joe and Charles started off the night hot and heavy, Joe usually always delivers and Charles is a tough and nasty competitor. Gallus and Die Familia will have a great 6 man match when the time comes.

Results: After Die Familie and Gallus interfere Charles Dempsey hit Joe with a forearm to the back of Joe’s head and put him to sleep with a dragon sleeper.

In 3 weeks: Symbiosis Vs Ashton Smith and Oliver Carter

In 4 weeks: Die Familie (Raja and Teoman) Vs Dave Mastiff and Jack Starz

Not announced for when the winners face off for Number one contendership.

Good: Jordan Devlin only needs himself.

Jordan cuts a promo to a video about his style of life, how he drives fast letting the wind flow through his hair. Closer to the end it shows how Jordan is arrogant, he knows fans adore him and he calls Ilja fighting for his family pathetic. Jordan believes he is better than Ilja for multiple reasons and they kinda just revealed the first one and that is because he is self-centred. Added more to the world title storyline.

In their promo noted that Moustache Mountain is the first to hold the nxt and the nxt UK tag titles. So Congrats to Tyler and Trent for making more history again as well as Tyler being a Grand Slam winner. Overall this promo was a thank you for those who stuck with the brand and how Trent is still treating this title reign as his last. It did what it needed to do, nothing spectacular.

SATISFACTORY: Ashton Smith and Oliver Carter have their sights set on gold

They talk about winning the tag gold since they are in the tag tournament.

Overall the previews for future matches are often very well done. Meiko and Blair are building on Blair/Bea’s past in japan calling herself the Top Gaijin that conquered Japan and now Meiko is the Gaijin. This match is the one match that could have a title change, I don’t see Meiko dropping it to anyone else unless they are putting Isla Dawn or Amale in that position. As of now, Blair has the momentum and skill to carry this division.  Blair Vs Meiko in 3 weeks.

Overall this short contest showcases Kenny Williams Vs Danny Jones a student of Mark Andrews, Danny Jones has been doing great in a team called Greedy Souls in the British independent circuit and this gave a look at his ability while Kenny made short work of him. I am unaware of when Kenny Vs Mark will take place as Mark posted on his Instagram saying he has a third injury… Get Well soon Mark. Regardless of when it happens Kenny and Mark will be able to tare the house down. Kenny mocking Andrews’ taunts as he “celebrated.”

Special Holiday NXT UK next week? I’m curious about what it will have.

Seemingly to cover up the actual injury they use an injury angle to write him for the time he needs to be out of action.

MUST WATCH: Nathan Frazer Vs A-Kid Heritage Cup Rules – Number one contendership for the Heritage Cup.

Two fan favourites always mix to create good and enjoyable matches. Both guys have good themes. Enjoyable Round 1 with the guys starting to kick it into high gear with a minute thirty left. Nathan gets the first fall in round two after they showcased athleticism. A good back and forth technical style moment exchanging pins resulted in Nathan getting a good roll-up. A-Kid shows frustration as they go to Round 3, his offense becomes more aggressive with multiple suplex variations. Frazer gets control for the better half of round 3 denying A Kid a fall within the last 20 seconds twice.  Round 4 brings a great sequence for A-Kid getting the second fall. Round 5 A Kid uses a brutal submission to get the second fall needed. Overall the entire match was really enjoyable, and heritage cup matches are fun to watch. Heritage cup matches are harder to grade but regardless this match is a MUST WATCH for those looking to see two awesome guys that represent the future of Wrestling.

Results: A Kid Pins and Submits Nathan Frazier 2 Falls to 1 to become the number one contender.

Overall the show was watchable, it had a little less storyline progression and a tease for what is to come next week. Two enjoyable matches took place in the opener and the main event. Outside of the matches to come the promos weren’t as good as last week’s. Main Event is one of the enjoyable heritage cup matches that can be added to its belt since becoming a mainstay stipulation in this brand.