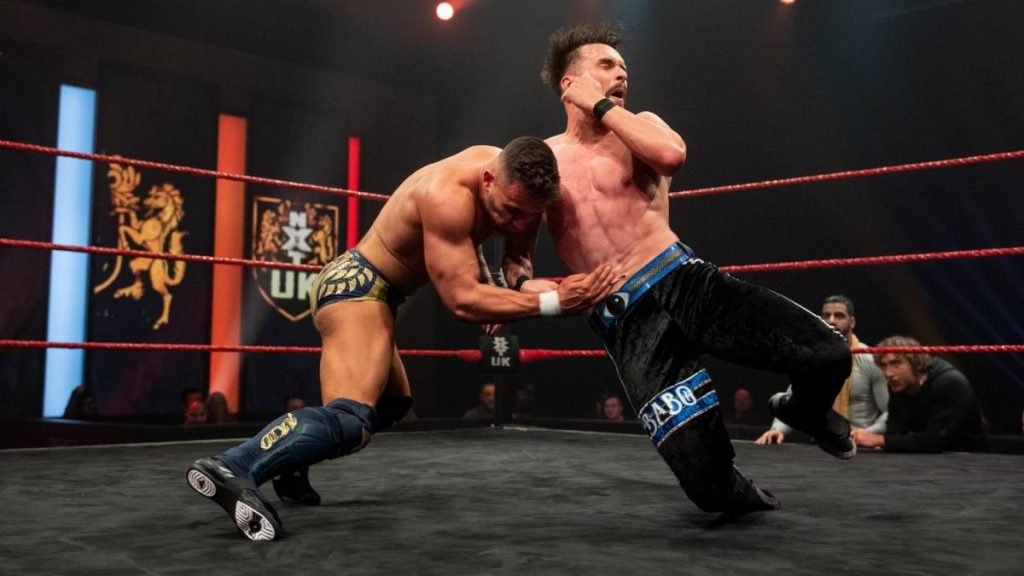 Preview: After last week’s amazing match between Ilja Dragunov and Roderick Strong, NXT UK looks to continue its momentum with another main event that is sure to deliver just as much. A-Kid looks to take on the mysterious leader of Die Familie, Teoman. We also see a recently made tag match between Dave Mastiff and Jack Starz vs The Brothers that represent Gallus, Joe and Mark Coffey. We also see the debut of Xia Brookside’s friend Eliza Alexander. Not to mention the guaranteed, eerie in ring promo between Isla Dawn and Meiko Satomura. Also what preparations are to come for next week’s Tag Team Championship match. Overall this should be an interesting episode.

GOOD Joe and Mark Coffey Vs Dave Mastiff and Jack Starz: Test of strength between Joe and Dave started the match before Dave tagged Jack and Jack fell victim to Joe and Mark’s tag team offense. Jack and Joe start striking and Jack gets the better of it, tagging in Dave. Jack and Dave take control of the match getting some tag offense on Joe. They are in control for a good bit of time doing some good and effective offense as Joe gets in control taking out Dave. Both teams get the tag Mark and Jack collide in the ring. Mark has early control before they trade back body drops and Dave gets the tag. Joe tags himself in causing dissension between them as Dave takes advantage and tags Jack letting Jack get the powerbomb. Mark was late to break the pin as issues among Gallus continue to be created.

Results: Jack Stars By Pinfall via Powerbomb onto Joe.

Jack and Dave leave as Mark and Joe are arguing in the ring, Wolfgang makes the save before Joe walks out of the ring first before they walk as a not so cohesive unit.

Roderick Strong shows respect to Ilja Dragunov after a recap of their main event. After the match Ilja is limping in the back before Roderick congratulates him. Jordan Devlin interrupts them as Devlin looks to get a rematch with him saying Ilja couldn’t beat him one on one.

Gradwell and Williams on their back alley brawl. Both guys share their words including Sam mentioning how he was raised and Williams thinking Sam will still believe its a mistake for messing with him.

GREAT Meiko Satomura and Isla Dawn Face to face: Meiko calls out Isla dawn and Isla Dawn comes out, as Isla arrives the similar eerie presentation happened, making it a widescreen and the dark feeling was promoted. Isla Dawn continues to rock this tough and challenging gimmick to be a part of. Isla spits a black mist-like substance in Meiko’s face before challenging her to a match in her dark world/realm. Overall a solid promo from Isla Dawn, Meiko didn’t need to say too much for her portion to be effective.

Amale will be watching Eliza’s debut match, warning Eliza and Xia about Amale’s rage. Wanting to get her hands on both of them.

Tensions continue to rise within Gallus. In their locker room there is loud dialogue and Joe is shown leaving the locker room.

Boar and Andrews are united against Symbiosis. Mark puts over their long friendship before they claim Symbiosis is the hunted.

GOOD Eliza Alexander with Xia Brookside Vs Angel Hayze: Instantly during Eliza’s entrance she is acknowledging and playing the crowd like a fiddle and I do like that a lot. Overall this was a solid match, no dead moments in the match, Xia continued to play cheerleader which was good because it develops them as a heel duo. Eliza hits a nice clothesline and a running knee to finish the match.

Results: Eliza Alexander By Pinfall Via Running Knee Strike to a kneeling Angel.

The stage is set for a tag team title match. Both teams are cutting promos to further build up next week’s two out of three falls.

AMAZING Teoman With Rohan Raja and Charlie Demspey Vs A-Kid: This match was a very solid main event, with Teoman and A-Kid stepping into the ring with each other for the first time since PWG’s BOLA 2019. This was a good match that had Teoman showcasing a lot of his offense and it looked really good. There were innovative moves and he has a unique finisher. Teomans wrist was hurt after a steel steps bump and a mannerism of going for the leg hook with the bad hand and quickly changing really was a good way to sell the injury to the hand. Overall this might be a send off for A-Kid and it was a great way to do it. Die Familie is a heel force to be reckoned with.

Overall NXT UK continues to put on a good show, with solid matches throughout the show and an interesting yet eerie segment between Isla and Meiko. The opening tag match was pretty good with Joe and Mark getting issues and Gallus might be breaking up soon. Dave and Jack might be next for Moustache Mountain if they retain. The back alley brawl for Gradwell and Williams will be interesting next week. Eliza Alexander had a good debut match here for NXT UK and the main event was another great main event that NXT UK pretty much always delivers!