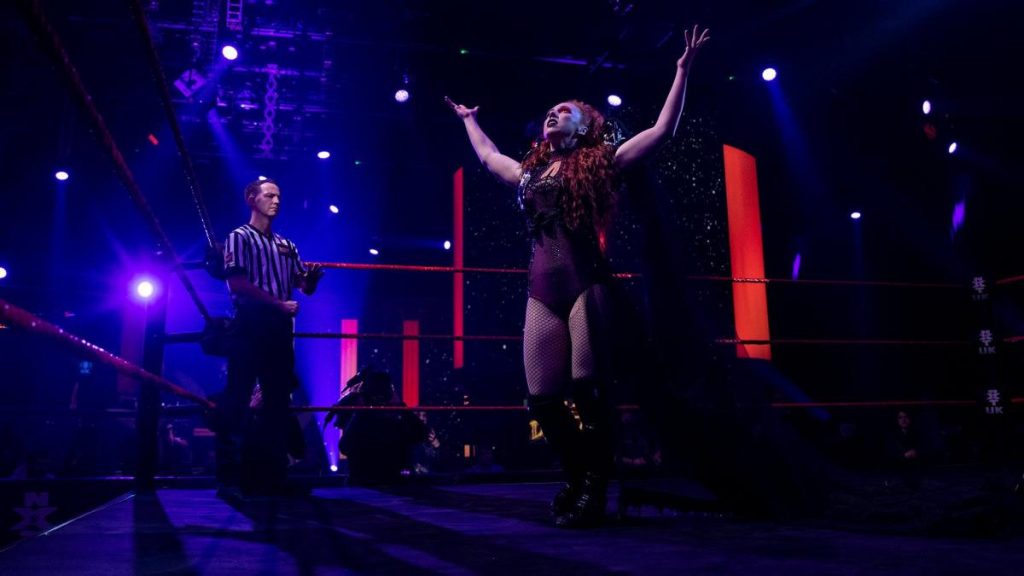 Preview: Tonight marks the second week in a row where we have a four match show. We have A-Kid and Saxon Huxley going against Rohan and Charlie of Die Familie, Teoman is sure to be in their corner. We have Wild Boar Vs T-Bone the first of two matches Eddie Dennis pitched instead of him. Jordan Devlin is back and is going one on one with Danny Jones. Our main event consists of Isla Dawn challenging Meiko Satomura for the NXT Uk Women’s championship. Will Isla Dawn dethrone the final boss? Will Ilja accept the challenge of Roderick Strongs? We will get those answers and more tonight.

GREAT Die Familie, Rohan Raja and Charlie Dempsey with Teoman Vs A-Kid And Saxon Huxley: When I say there are two wrestlers in this match that are really solid with what they can do. I’d recommend believing in my statement. A-Kid looks effortless with what he can do. Beautiful athleticism and technical talent. Charlie Dempsey is a great technical wrestler as well and better be making William Regal proud. This was a fun tag match where just as it seemed A-Kid and Saxon could get the victory, Teoman interfered to cost them the match. A solid and fun opener. Awesome stuff from both A-Kid and Charlie.

Xia Brookside Challenges Amale to a rematch, This was a short interview, Amale barely got to answer the question. Xia came in and challenged Amale to a rematch. The camera man spied on Xia as Xia called her father saying “its time.” So when Xia and Amale face off I could see her going over.

Ilja Dragunov accepts Roderick Strong’s Challenge. Ilja mentions how he admires Strong’s last name, how he had to be strong since coming to nxt UK. and how Diamonds are made from pressure. Ilja aims to not crack under the pressure when he faces Roderick Strong.

Someone is messing with Kenny Williams. Kenny Williams seems to be going a little crazy, as he lost his car keys. He went out to the parking lot to see his car missing a tire. Further mind games are being played.

Roderick Vs Dragunov is made official for two weeks.

AVERAGE Jordan Devlin Vs Danny Jones: I do want to put over Jordan Devlin’s entrance, his mannerisms are really good for a cocky heel. This match really picked up for the second half. Danny keeps getting good showings against NXT Uk talent and I like that. A few nice spots but ultimately Jordan Devlin won.

Seven and Smith prepare for their match. Enjoyable promo video preparing us for next week.

Mark Coffey looks to prove himself next week. Enjoyable promo video preparing us for next week as well. Mark Coffey got put over as someone who could get a shocking victory over Dar.

Next week Xia Vs Amale as well.

GREAT  Meiko Satomura Vs Isla Dawn – NXT Uk Women’s Championship: Overall this was a good match again. Isla Dawn really took a lot of Meiko’s offense. Meiko has such solid stuff also. I found it odd that Meiko wins by a roll up again and the rivalry is sure to continue as Isla Dawn stole the title walking out with it. Nothing too spectacular and not a match I’d plan to rewatch. Enjoyable as a solid main event though.

Results: Meiko Satomura Retains By Pinfall Via Unique Roll Up.

Overall NXT UK continues to deliver a solid show. The main event was a step up after the under delivered match of Roderick Strong Vs Wolfgang from last week’s episode. A-Kid and Charlie Dempsey continue to show effortlessly solid work in the ring. A-Kid is one of my favourite wrestlers right now. Two fun mid card matches with Wild Boar winning in his return and Jordan Devlin getting another win since losing to Ilja in January. Meiko and Isla had a fun and good main event with a satisfying ending that pretty much guarantees we will get a better rematch. Next week looks to be solid with Xia Brookside Vs Amale, Trent Seven Vs Ashton Smith and Mark Coffey Vs Noam Dar under heritage cup rules.