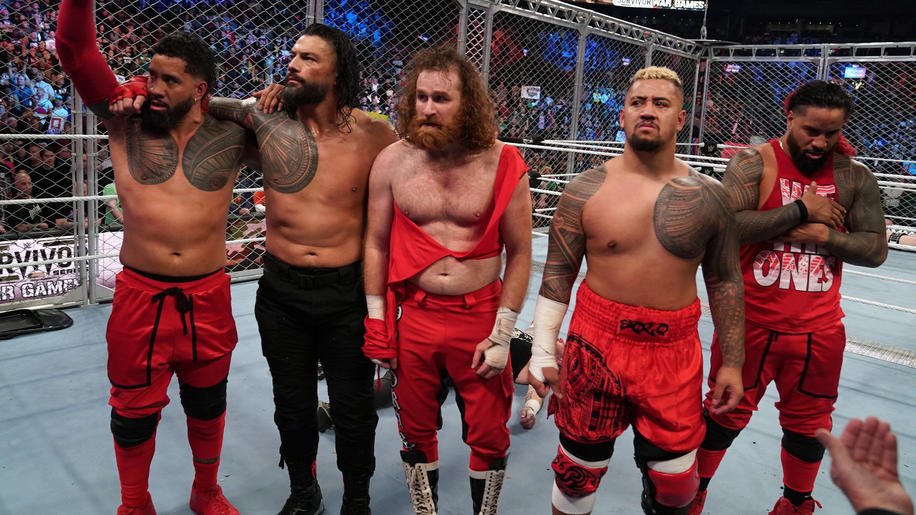 Overall this was a really fun show. Both WarGames matches were exciting, and the rest of the card had some high spots as well. Finn Balor and AJ Styles showed that they still have it in their match, which saw AJ win via Phenomenal Forearm. The Women’s WarGames Match was won by Becky Lynch after a huge dive off the side of the cage through a table. Ronda Rousey retained her title against Shotzi. Austin Theory was able to win the United States Title for a second time. In the main event, Sami Zayn proved his loyalty to The Bloodline by delivering both a low blow and a Helluva Kick to his former friend Kevin Owens to allow his side to win the match. Oh yeah, this was the final main roster premium live event of the calendar year.

War Games arrives for the first time on the main roster and what a better place to put it than at Survivor Series. The Bloodline faces Drew McIntyre, Kevin Owens and The Brawling Brutes. Leaders collide with Aj Styles facing Finn Balor for the first time since TLC 2017! Seth Rollins collides with two threats to his United States championship in Bobby Lashley and Austin Theory. Ronda Rousey defends against Smackdown’s resident Tank Owner, Shotzi. For the women, Team Bayley faces Team Bianca inside of War Games as well.

Bianca Belair and Dakota Kai were the ones to start the match. Back and forth before Iyo Sky joined her tag team partner. Asuka evened things up by having a solid exchange with Iyo. Nikki Cross was next and was the first to grab some weapons including kendo sticks. Bliss was next and was able to get a nice dropkick to Dakota Kai holding a trash can lid. Bliss got her moments to even the odds before Bayley made her way down to the ring.

Bayley grabbed a ladder and Mia Yim had retrieved some trash cans. All eight women engaged in 4 consecutive superplexes before Rhea Ripley came out. Becky Lynch was the last women to join the fray. Rhea Ripley got misted, there was a scary bump with Bayley and Bianca. Iyo got her signature moonsault off of the top.

Becky and Bianca had a solid sequence of exchanging a man handle slam and a KOD. Becky got the win with a diving leg drop from the top to both Dakota and Iyo. (limited summary since I am doing this after) Summary by Coby

“So this match was a solid and fun opener but the crowd lacked investment in the match at times. There were a handful of noticeable things that weren’t clean or smooth. I can’t say this was my favourite women’s war games match but it was entertaining. Becky looks really happy to be back, but I am unsure where this story goes now. ” – Coby Galenzoski

Results: Becky Lynch by Pinfall via Diving Leg Drop From The Top

AMAZING Aj Styles With The O.C. Vs Finn Balor With Judgment Day:

Balor has a very long entrance with both Dominik and Damian Priest. Ripley is absent after the opening match. Styles enters next accompanied by the OC. The early action is a lot of very clean classic traditional wrestling. Dominik and Damian Priest insert themselves into the action but Karl Anderson and Luke Gallows quickly intervene and go after Mysterio. Priest catches up and all four men fight into the crowd.

Now with Balor and Styles alone in the ring, Finn looks for a slingblade but he’s hit with an enziguri from Styles. This is as much offense as I’ve seen Balor employ this year. Styles and Balor look as good as they have in a pay per view match that I have seen in recent memory. This could turn out to be the match of the night. In the end AJ Styles hits a Phenomenal Forearm and he picks up the win over his old friend Finn Balor. Summary By Clark

“This match excelled in the selling of Finn’s leg and overall you could truly see the wounds and bruises on both bodies. This match was a rematch from TLC 2017 and was better in my opinion. The crowd was fairly hot for the whole match, with the brawl between the OC and the Judgment Day in the crowd gaining good reactions. There were some very solid spots in this match and it was a pleasure to watch. ” – Coby Galenzoski

“I thought the placement on the card was a bit odd, but after a little bit of a slow start this one really picked up and turned out to be awesome.” – Clark Taylor

This was the shortest match of the show, and the crowd was vocal for the wrong reasons. The Crowd had chanted for Boston’s own Sasha Banks. Shotzi almost had a sink apron ddt but something went wrong. Nothing in this match looked good. Shotzi was selling for Ronda. Shotzi had multiple moments of fighting the two on one battle. Ronda won with the armbar after Piper’s pit. Summary by Coby.

“When I can count the amount of good Ronda Rousey matches she has had this year with one finger. Something isn’t working this year. There is only so much you can do to make someone look good against someone who can legitimately kick ass. Charlotte has been the one person to get a good match out of Ronda this year. Shayna being Ronda’s Bestie Killer instead of a Killer is not working for me. To me it was the biggest mistake of the year putting the title back on Rousey. Something I will always try to do is say something good about the match when I criticize it. The match had some good story stuff with Shotzi being able to target both Shayna and Ronda. Shotzi was growing as the underdog in the match but once again the crowd did not care.” – Coby Galenzoski

“This wasn’t my favorite, that’s all I’ve got to say.” – Clark Taylor

“After a strange titantron change for Austin Theory and Seth Rollins being serenaded like always this match started off hot. Both Lashley and Seth clotheslined Austin out of the ring separately. The match was honestly a very fun and solid match up. Seth did what he does best and is phenomenal in the ring. The finish was very solid with Austin Theory stealing the victory by falling on top of Seth after the spear. There were great exchanges and sequences in the match and this match without a doubt delivered” Summary / Quote Coby Galenzoski

Butch and Jey Uso start the match and Butch is all over him in the early going. Jey turns things around to throw Butch into the cage but in only a few minutes the Brawling Brutes will have an advantage. Ridge Holland is in next for his side and it seems the time goes quickly while they have the two on one advantage. Sami Zayn enters next for his side as Roman sends him in second to join the one member of the team that he has yet to truly find a way to coexist with.

Immediately it is apparent that Sami and Jey are not on the same page. Drew McIntyre is out next for the Brutes and he immediately is swarmed by Sami and Jey. The Scottish Warrior is too much for the two of them and he throws Jey around off the steel cage. Sami is hit with a belly to belly and McIntyre is on fire. Jimmy Uso is next to enter for the Bloodline and he brings 3 tables into the match and once in the ring, Jey and Sami get into an argument. Kevin Owens is next for the brutes and he brings in a pile of chairs. He unloads on the Bloodline and hits a ddt on Jimmy on the chair. Solo Sikoa is next for his side and he goes right after Kevin Owens.

Sheamus is after that and only Roman Reigns remains before this match is fully underway. The leader of the Brutes comes out like a house of fire and he hits all 4 members of the Bloodline with various strikes. Roman Reigns is in the ring and the match is officially underway. All 10 men stare each other down in separate rings. Reigns delivers uppercuts to each member of the other side and then hits Sheamus with a Superman Punch. He follows that with a Spear attempt but Sheamus catches him with a knee.

All 5 members of the Brawling Brutes team deliver 10 Beats of the Bodhran to The Bloodline. Sheamus hits a Brogue Kick on Solo Sikoa but Roman Reigns drills him with a spear. Butch breaks up the pin and Sami is there to attack Butch. Right in front of Roman Reigns Jey misses a superkick attempt and accidentally hits Sami Zayn. Roman recovers though and spears Ridge Holland through the table. Kevin Owens and Roman stare each other down in the ring and this fight is about to happen.

KO hits a Stunner on Reigns but it’s his old friend Sami there to break up the pin. Sami follows by hitting his former best friend with a low blow. Zayn looks down at Roman Reigns and he says something to him before delivering a Helluva Kick to Owens. He then points at Jey to hit the Splash and The Bloodline wins on the back of Sami Zayn’s standout performance.

“Coming out of this match it is hard not to say this is the best storyline in wrestling. Sami Zayn the honorary Uce has earned his stripes, has earned Jey Usos’ trust and despite being an emotional wreck when he did it. He proved himself as a true asset to the bloodline. The only place this match kinda lacked was innovative spots. Nothing phenomenal was done in the match but the match was one of the best story told main events this year.  ” – Coby Galenzoski

“This was all about Sami Zayn, he stole the show, it’s as simple as that.” – Clark Taylor

Results: The Bloodline by Pinfall via Uso Splash

Overall this was a really fun show. Both WarGames matches were exciting, and the rest of the card had some high spots as well. Finn Balor and AJ Styles showed that they still have it in their match, which saw AJ win via Phenomenal Forearm. The Women’s WarGames Match was won by Becky Lynch after a huge dive off the side of the cage through a table. Ronda Rousey retained her title against Shotzi. Austin Theory was able to win the United States Title for a second time. In the main event, Sami Zayn proved his loyalty to The Bloodline by delivering both a low blow and a Helluva Kick to his former friend Kevin Owens to allow his side to win the match. Oh yeah, this was the final main roster premium live event of the calendar year.