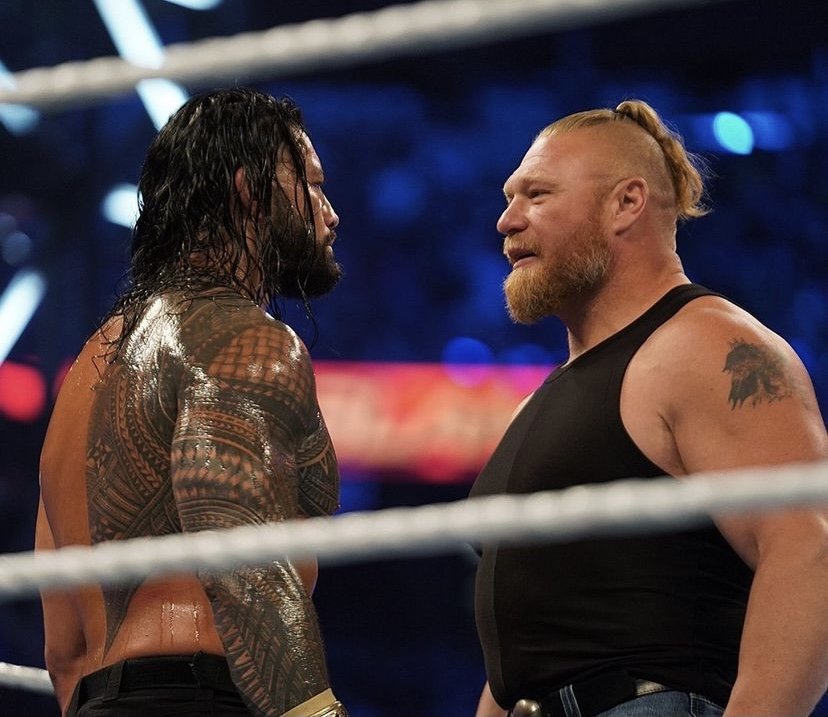 GOOD: RK-Bro defeated AJ Styles & Omos to open up SummerSlam and win the Raw Tag Team Championships. The match was not very long, but was very entertaining and got the crowd very hype. The chemistry between Orton & Riddle was shown during this match and the ending sequence was beautiful.

POOR SQUASH: Alexa Bliss defeated Eva Marie in what was essentially a squash match that was unnecessary to show on pay per view. There were, “We want Wyatt” chants throughout the entire few minutes of the draft.

GREAT: The Usos defeated The Mysterios to retain their Smackdown Tag Team Championship in what was their best tag team match to date. The match wasn’t the absolute smoothest match at times, but the crowd helped it feel exciting.

Result – The Usos Win by Pinfall

MUST WATCH: After Bianca Belair’s entrance, Greg Hamilton announced that Sasha Banks is unable to appear and will be replaced by Carmella. The crowd and Belair looked sad & just as the ref was about to ring the bell, Becky Lynch’s music hit and the crowd went insane. They stayed extremely hype all the way up to when the bell rung. This was a very memorable moment.

AVERAGE SQUASH: Becky Lynch defeated Bianca Belair in a matter of seconds after Lynch hit Belair with a stiff elbow and then a Man Handle Slam. This was absolutely shocking and it will be interesting to see where the story goes in the future.

GOOD: Drew McIntyre defeated Jinder Mahal in a slightly underwhelming match considering the history between the two competitors. The match itself was still enjoyable and did not drag because it did not go too long.

MUST WATCH: Charlotte Flair defeated Nikki A.S.H. & Rhea Ripley in an amazing match. All three women looked legit here, even A.S.H. who, to this point, had not been taken very serious. Flair made A.S.H. tap out to finish the match.

MUST WATCH: Edge defeated Seth Rollins in what was, by far, the match of the night. This match had raw emotion, incredible action, and fantastic story telling. Edge’s entrance to the ring added to the story telling because Rollins brought out a dark side of Edge, which makes Edge winning via submission make sense.

BAD: Bobby Lashley defeated Goldberg in a very sloppy match to retain the WWE Championship. Goldberg’s selling of his leg injury was terrible and other moves that were done looked unrealistic. The crowd being very excited helped this match a little.

MUST WATCH: Roman Reigns defeated John Cena in what felt like the biggest and most important WWE match of the year to retain the Universal Championship. The match started out with Reigns dominating Cena, besides Cena using a few different roll ups until he was able to turn the momentum around. As soon as both men started trading and countering moves, the match really picked up and the crowd was loved every single bit of it.

MUST WATCH: After the match, Roman Reigns was standing over John Cena with his universal Championship and then Brock Lesnar’s music hit and the crowd went more nuts than they had all night. Lesnar then appeared looking absolutely ripped with his man bun and beard and walked to the ring to confront Reigns. He got in Reigns’ face and then Reigns and Paul Heyman both walked away as Lesnar started posing for the crowd and hyping them up. This was such a great way to end SummerSlam.

Overall, this felt like a very weird show, especially to start out with, but once the ball got rolling, not even a below average WWE Championship match could really slow down the momentum of the show. Having RKBro win the tag titles to open up the show was smart & one of the highlights of the night. Besides the WWE Title match and Marie v Bliss, every match was enjoyable in some fashion. Edge v Seth Rollins was an awesome dream match that came to life & Roman Reigns v John Cena was a classic as well.