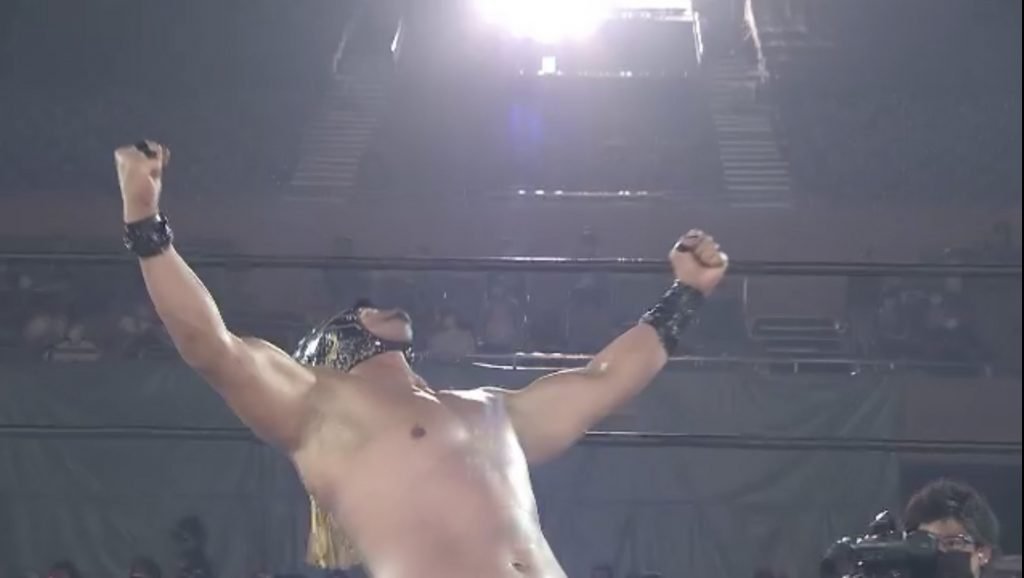 Today, Sapporo kicked off the Summer of New Japan Pro Wrestling as it washed away the rainy season of Japan and gave us an amazing show. New feuds, a home welcome of a Holy Emperor, and an epic war of a Bone Soldier and a Desperado maskman

“Kota Ibushi is currently affected by side effects from a COVID-19 vaccination, and in his best health interests, will not be participating on tonight’s Summer Struggle in Sapporo night one card. We apologise to fans who were looking forward to seeing Ibushi wrestle, and appreciate your understanding. Ibushi’s condition will continue to be monitored, and decisions made as to his participation in upcoming matches.”

WATO VS UEMURA
Due to this, the match was originally a tag match that was Ibushi and Master Wato against Yota Tsuji and Yuya Uemura. This match was changed to Master Wato vs Uemura that Wato won in about 9 minutes.

Next we had the Chaos team of The Stone Pit-bull Tomohiro Ishii and “Direct Drive” Yoh against The King of Darkness Evil and Dick Togo. This took back from when Evil attacked Ishii at Kourakuen Hall. Due to this Ishii and Yoh attacked Evil and Togo straight up when they got to the ring during their entrance. But that did not help them get the victory. At the end Evil got Yoh in the Scorpion Death-lock and Yoh tapped out. After the bell, Togo put Ishii in a cross face and Ishii was defenseless. Then Evil and Togo went in the curtains but shortly after Ishii got up and ran to the curtains to get Evil.

Our next bout is the Hon-tai & Chaos team of Rocky Romero, Ryusuke Taguchi, and Hiroshi Tanahashi. On the opposite corner we have Kenta, Yujiro Takahashi, El Phantasmo. We started out with Tanahashi while BC were still discussing who will go in first. And Tana broke that by calling Kenta and saying long time no see. But as BC, Kenta tagged in Phantasmo about 20 seconds in and Tana did the same with Taguchi. Then they noticed their T shirts and decided to swap but this was a set up to choke Taguchi with his T shirt. My favorite part was when Kenta was keeping on kicking and targeting Taguchi’s bottom and Phantasmo did some hip attacks until Taguchi read one of his bottoms. The match ended with Tanahashi hitting Yujiro with the High Fly Flow. They celebrated and let Rocky and Taguchi go out the ring first and Tana was still in the ring on the second rope waving to fans when Kenta struck and possibly made the rebirth of the Tana Kenta feud.

Now we had the feud set up match of Sho and Okada against Cobb and O-Khan. I thought this would be the showcase of Sho that he could play with the heavyweights and he handled them very well. The first 1 min started out as a Lidet UWF style because of Sho’s match against Ito in GLEAT VER.1 at TTC Hall that was a Lidet UWF bout that Sho won. The match was wrapped as Sho took a Tour of the Islands by Cobb and the United Empire took home the win. After the bell, Cobb and Okada went face to face while Tsuji holding Okada back potentially having a match during the Summer Struggle tour.

Next we have the last time Naito and Sanada meet the champion team of Dangerous Tekkers before their match the next day. This was nothing special as it was very familiar to the preview matches at Kizuna Road. The match ended with a Pumping Bomber from the TKG to Douki and a 1 2 3. The aftermath was a face to face and a trade of words of the 4 men that will compete the next day for tag gold.

Ladies and Gentlemen, Your main event of the evening. El Desperado vs Taji Ishimori. This was an amazing match with both of them going their all out. During the match, Desperado was targeting Ishimori’s leg while Ishimori was targeting Desperado’s shoulder. This was an all out brawl. Another eye catching moment was when the ref was down and they both traded low blows (first Ishimori and then Despy) and then ELP came and faked a Sudden Death and gave one to the mid-section. Then Kanemaru came and pulled Phantasmo out of the match and into the curtains. Nearing the end Ishimori locked the Bone Lock on Despy but Despy’s fighting spirit kept fighting and escaped from the Bone Lock. The match was wrapped with a Loco Mono and a Pinche Loco and the Desperado successfully defended his title.

After the match the lights went out for a second and a familiar music came on and the video screen went on and we saw Robbie Eagles on the screen! (I am a big Robbie fan) After the finals of the WTL and BOTSJ 27 tournament he went back to Australia and started to train as he came up short in the Super Junior’s. We have not seen him since and now he has challenged Desperado to the gold. He states that the Jr division is like vaulters grabbing their shots left and right while he has been silent. Now he has to become one of these vaulters and will challenge for the gold. We still don’t know when this will happen but Desperado says that he will want this to happen at Wrestle Grand Slam at the Tokyo Dome. This is still not confirmed.

Were you guys satisfied of how the summer got kicked off? Are you guys excited about this upcoming match of The Sniper of the Skies? We still have tomorrow and we will see how if will top this off!