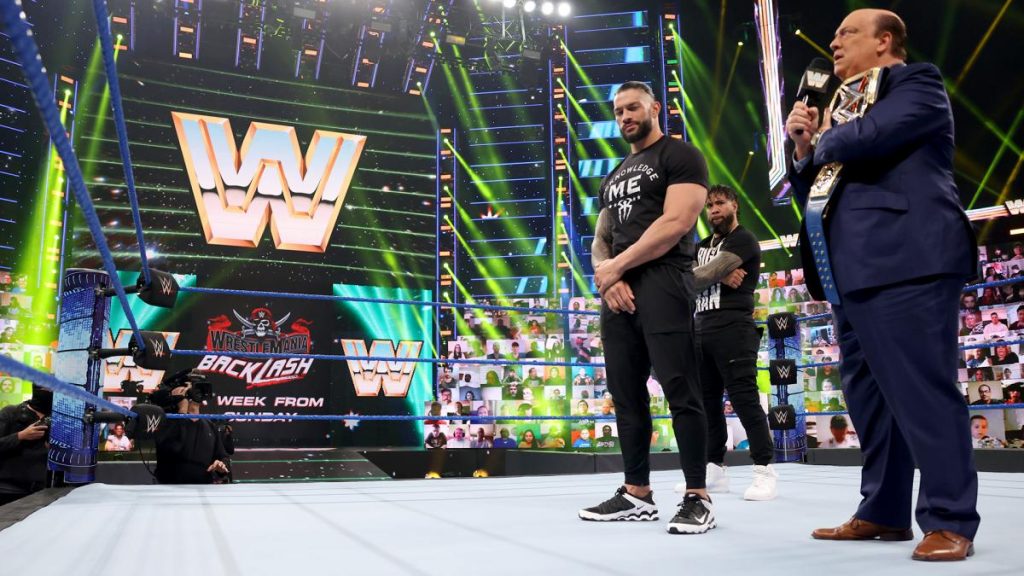 This weeks episode of SmackDown was advertised as the ‘Throwback Edition’ with the show being heavily advertised across social media since it was announced last Friday. As with any special episode, fans expectations were higher than usual, but could SmackDown live up to the hype?

GREAT: The show kicked off with an old fashioned style intro and this certainly helped the show feel special from the get go. It then cut to Michael Cole, dressed as a young version of himself, and Pat McAfee, dressed in a classic Vince McMahon attire, where they spoke about what would happen tonight.

MUST WATCH: Roman Reigns then came down to the ring followed by Paul Heyman and Jey Uso. Heyman hosted a 10 bell salute for Daniel Bryan’s loss last week, but instead of using an actual bell Heyman did it himself. You could even see Roman laughing a little. Reigns then said that SmackDown has a replacement for Daniel Bryan, and out came Jimmy Uso who returned for the first time in a year. Cesaro then came out to crash the party before Rollins took him out from behind. To end the segment Teddy Long came out to reveal that if Cesaro can beat Rollins, he’ll challenge Reigns at WrestleMania Backlash.

GREAT: In the opening match of the evening, Cesaro defeated Seth Rollins with help from Jimmy Uso who super kicked Rollins after a frustrated Rollins took out Jey Uso towards the end of the match. The camera then cut to Reigns watching and being extremely displeased backstage at what just happened.

GREAT: Backstage Rollins then confronts Reigns saying the Usos cost him the match. Reigns then replies saying that the Usos may have screwed Rollins, but Rollins losing screwed him. Reigns then added he will sort out his cousins, and Rollins says they are good for now, but if he doesn’t sort them out, he will.

GREAT: Teddy Long is backstage with Sonya Deville before Sami Zayn walks in and demands a match with Apollo Crews. Teddy Long says he will do him one better, as tonight he will go one on one with the Undertaker! Teddy then gets reminded Taker is retired so instead he books him to team with Apollo in a ten man tag team match!

GREAT: In Reigns’ private dressing room, he tells Jimmy that while he’s been gone him and his brother have had a good operation going, but the day that he comes back he is already making mistakes. Jimmy then tells Roman he ‘ain’t nobody bitch’ before walking away. Reigns tells Jey to go and talk to him.

AVERAGE: Carmella then defeated Ruby Riott in a short match which was performed well, but the Riott Squad came across as the heels which was slightly confusing.

GOOD: Bayley came out to talk about the history of women’s champions in the WWE, but as expected she noted that she was better than every single one. Bianca Belair then came out leading to the two throwing verbal shots at each other, before it became physical and eventually Bayley hit the Rose Plant on Bianca.

GREAT: Backstage Jimmy is pacing back and forth before Jey comes in and asks him if he really does just consider him Reigns’ bitch, to which Jimmy says yes. Jimmy goes on to say that if this was really about the family, they would all be champions, not just Roman.

AVERAGE: Dolph Ziggler walks out while cutting a promo on Rey Mysterio before their match, however insults Dominick leading to him stepping in for Rey instead.

AVERAGE: Dominick Mysterio went on to have a shock victory over Dolph via a variation of a rollup pin.

POOR: In an interview with Kayla, Reginald spoke about Tamina’s passionate promo from Talking Smack last week, and challenged her to a match.

POOR SQUASH: Tamina defeated Reginald by DQ after Nia Jax and Shayna attacked her as she was about fo get the victory.

GOOD: Both 5 man teams cut backstage promos on each other ahead of the main event.

AVERAGE: The main event was a five on five main event with Alpha Academy, Sami Zayn, Apollo Crews & King Corbin defeating Big E, Street Profits, Kevin Owens and Shinsuke Nakamura. The match was fun but ridiculously messy with Otis almost killing himself and Ford when he didn’t prepare for catching him with the five resulting in Montez almost taking the head of Otis off and landing directly on the floor in a spot which must have hurt Ford like hell. I think it may be impossible to do a five on five traditional tag match fantastically, but still, this was beyond messy and reminded me of what we use to complain about AEW doing in the early days of the promotion.

GOOD: Backstage Reigns explains to Jey that he loves Jimmy, but he needs to know where he stands.

MUST WATCH: To close the show Reigns came out to the ring with Jey to explain why Jimmy needs to stand in line, but Jimmy came out and interrupted Roman. Jimmy brought up the I Quit match and all Roman’s actions from last year, and then told Jey that if it was him, he wouldn’t have quit. Reigns then says that if he won’t stand in line, he can go home and explain that to his kids. Jimmy then leaves the ring and Jey follows to try to stop him, but Cesaro takes out Reigns from behind, before then taking out Jey as well, leading to Jimmy trying to make the save but Cesaro took him out too.

Overall this weeks SmackDown was another very solid episode from the blue brand. The first hour of the show was significantly better than the second, however as per usual, the main event storyline massively helped the show with a lot of mediocrity in the midcard. I’m not going to mark the show down for this at all, but the lack of an actual classic SmackDown feel to the show was disappointing, with the show having more of a 90’s WWE vibe compared to a classic SmackDown one. 7.6/10 overall.