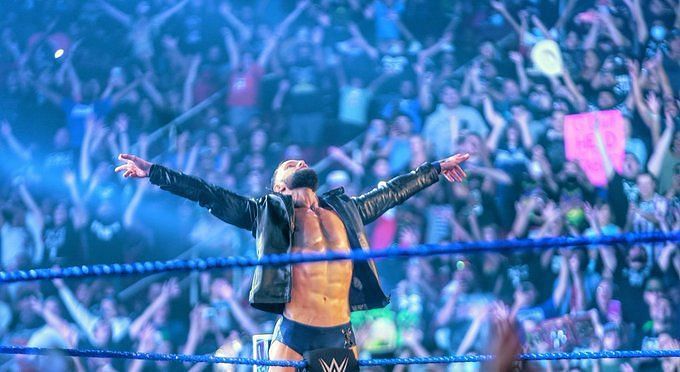 Coming right off Money in the Bank, Smackdown looks hot. With a Women’s Championship match, Finn Balor in action, Toni Storm making her Smackdown debut, and a appearance from John Cena all lined up, Smackdown is stacked.Also, for the first time ever, Smackdown is live from 2 cities. So enough chit chat, let’s get right into the show.

MUST WATCH: We opened the show with the recently returned John Cena. John Cena comes out and does exactly what he said we was gonna do on Raw, challenge Roman Reigns to a Universal Championship match in the main event of SummerSlam next month in Las Vegas. He hypes up the crowd and calls out Roman, but instead he got Paul Heyman. Heyman tells Cena that he has it all wrong. He also tells Cena that Roman will respond when he wants to, before giving his own cover of John Cena’s theme before walking out. John Cena, Roman Reigns, and Paul Heyman are easily three of the most entertaining men in wrestling right now, and I can’t wait to see where this feud goes.

GREAT:Next up we got what easily one of the best TV matches on Smackdown of the year in Sami Zayn vs Finn Balor. From the time that the bell rung, all the way up until the match ended, these two tore the house down. I mean they pulled out all the stops. At one point Balor hit one of the best looking tope suicidas I’ve seen in a while. Then Sami Zayn reversed a running double dropkick from Balor into a Michinoku Driver/Blue Thunder Bomb hybrid. The match ended after Balor successfully hit the Coup De Grace and pinned Zayn.

GOOD: Then out came Mr Money in the Bank Big E. Big E began talking about how Money in the Bank was a night he’ll never forget. Before he could continue, the Intercontinental Champion Apollo Crews, interrupts him and tells Big E he’s not a champion like Apollo is, and reminds E that Apollo beat him at Mania. Crews is then interrupted by The Dirty Dawgs, who are interrupted by Rick Boogs and Shinsuke Nakamura, who are interrupted by Cesaro. This all leads to a big brawl which leads to a 6-man tag team dark match for the people in attendence, while we switch over to Rolling Loud.

AVERAGE: Oh WWE, why do you do the things you do? Next up we got Angelo Dawkins vs. Chad Gable at the Rolling Loud Hip Hop Festival in the Miami Gardens. I mean honestly, the match was fine, as Angelo Dawkins picked up a victory over Chad Gable. There isn’t much to say about it though as it wasn’t too long, but the problem is the crowd, who definitely was not into it.

GOOD: Then at Rolling Loud, we got Bianca Belair defending her title against Carmella in a rematch from last week. This match was a step up from the last one, but once again the crowd just wasn’t into it. I mean Belair and Carmella were more over than Dawkins and Gable, but the crowd starting chanting “We want Carti” as Playboi Carti was pushed back so Smackdown can have their matches. Bianca Belair beat Carmella after hitting a K.O.D. and successfully pinning Mella for the 3 count.

MUST WATCH: Coming back to Smackdown, Edge came out and he wasn’t happy. He cut a promo on Seth Rollins and how he should regret not pulling the trigger and stomp on Edge’s neck in 2014. Before he could continue, Seth Rollins came out and said he would re-injure Edge. “Poof there goes your neck. Up in smoke.” This line is what prompted Edge to attack Seth and before Edge could hit a spear, Rollins escaped. This feud is really good so far and I hope the payoff is just as good, if not better.

GOOD SQUASH: Usually, I don’t like squash matches. But this? Wow! Toni Storm made her Smackdown debut against Zelina Vega. This match wasn’t too long (obviously) but Toni Storm ended up winning after debuting her new finisher, Storm One.

GREAT: Then we saw Kevin Owens backstage talking to Shotzi and Nox. Baron Corbin appeared and he was still wearing his stained shirt from last week. Corbin revealed he accidentally made a deal with a shady guy and now all his credit is gone. Owens gave Corbin some money and walked off. Shotzi then accidentally shot Baron in his Corbins with her mini-tank. The Dirty Dawgs walked by and attempted to steal Corbin’s money but Kevin Owens came back and scared them off. I loved this. I love Corbin’s new gimmick and I didn’t know I needed this Corbin/Owens combination until now.

GOOD: Up next we got a short match between Dominik Mysterio and Jimmy Uso. While, yes it was short, it was still good. Jimmy won after a roll up and an outside assist from Jey Uso, similar to how they won the tag titles last Sunday at Money in the Bank.

MUST WATCH: As Jimmy and Jey were walking to the back, The Universal Champion Head of the Table Tribal Chief Roman Reigns and his special council Paul Heyman came out. Roman grabbed a mic and began talking about John Cena. He said that Cena came back on Money in the Bank with the same music, same attire, same promo, same insult, then Roman compares John Cena to the Missionary Position. He says he doesn’t see John Cena, he doesn’t want to see John Cena, he doesn’t NEED to see John Cena. He declines Cena’s SummerSlam challenge and as he went to leave, Finn Balor’s music came on. The crowd went crazy. Balor told Reigns that if he won’t except Cena’s challenge, maybe he’ll accept Balor’s. Reigns and Heyman talked it over before Roman accepted Finn’s challenge, ending the show.

Wow! What a show! Everything from top to bottom was near perfect. I’m excited to see what’s next for the Intercontinental Championship scene, and even more excited to see what’s gonna happen between Roman Reigns and Finn Balor. This is definitely a step up from last week, and we can only hope that Smackdown keeps this momentum.