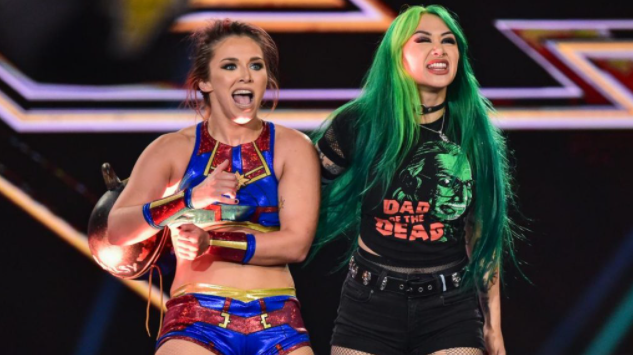 Vince McMahon’s search for main roster talent after his visit to the PC has it’s first movers. Tonight on Smackdown, it was mentioned just before a break that the Women’s Tag Team Champions Natalya and Tamina would have a new challenge tonight. A challenge that they’ve never seen, and has never appeared on Smackdown. From this, out came Shotzi Blackheart in her tank, but along with Tegan Nox!

Nox, who just returned from yet another knee surgery two short days ago on NXT, is a slightly bigger surprise here. Happy to see her get this opportunity. She had been reported as wrestling in dark matches, but it was assumed they were simply tune uo matches. Now we see they weren’t.

Shotzi wasn’t too shocking, as her and her known partner Ember Moon don’t have much going on right now. She was also more expected than others because of matches she’s had before Raw and Smackdown along with a few other NXT stars.

The match went down pretty well, especially for the newest members of the Smackdown roster. They managed to pick up a perfectly clean win while getting the ball rolling on the next step in their careers. An interesting side note, despite being called by their full names by the commentators, they were called as Shotzi and Nox on screen and from the ring announcer.

I for one am cautiously optimistic for them. They both have potential to do some very cool things on the main roster, as a team, but mostly on their own down the line.