Wrestling event makes its return since 2018 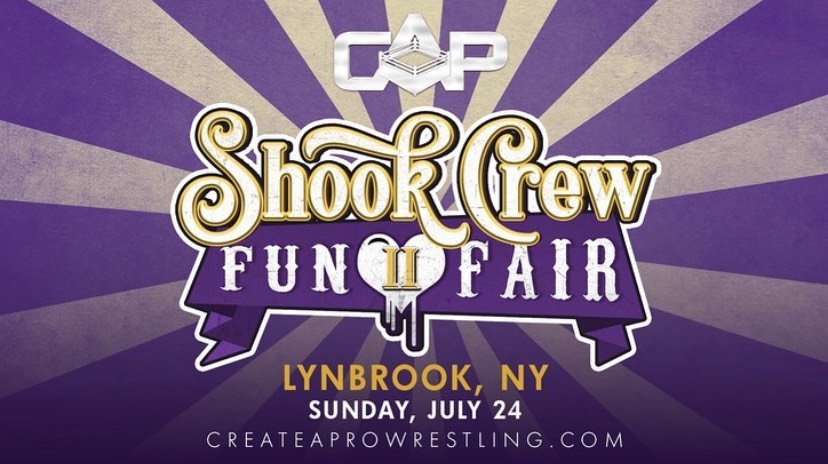 After a four-year hiatus, The Shook Crew Fun Fair show will be returning to Create A Pro Wrestling on July 24th in Lynbrook New York.  The last time this show occurred was in 2018.

The first match announced for this event is AEW’s Santana Ortiz vs. VSK.

Here is the announced talent for the show so far. (please note that the card is subject to change):

Create A Pro Wrestling Academy is a training center and promotion based out of Hicksville, New York, and is operated and owned by Brian Myers and Pat Buck.  Notable graduates of the school include Maxwell Jacob Friedman, Max Caster, Mark Sterling, and Kris Statlander among others.

Shook Crew is a faction-based from Create A Pro and they have been dominating the independent wrestling scene for years. The trio is comprised of Bryce Donovan, Bobby Orlando, and Max Caster. Bryce Donovan is the current Create A Pro Champion and also holds the Victory Pro Wrestling Tag Team titles alongside Bobby Orlando.  Max Caster is currently signed to All Elite Wrestling and is one-half of the popular tag team The Acclaimed alongside Anthony Bowens.

Shook Crew Fun Fair 2 will be held on July 24th at the Knights of Columbus in Lynbrook, New York. Tickets for the event can be found here.