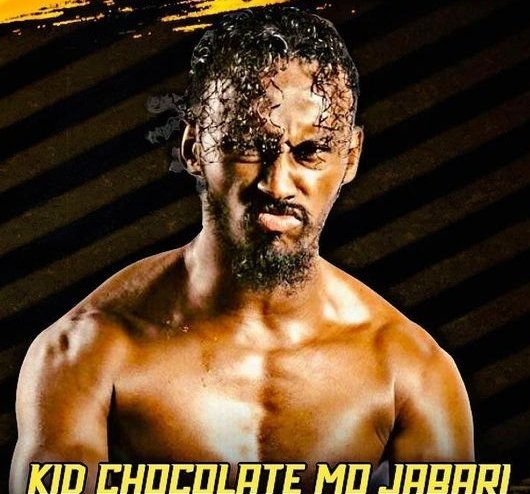 From Dungeon Wrestling to appearing on WWE and AEW. Mo Jabari is a rising superstar that launched onto the scene in 2017 and now it’s time the wrestling world takes notice.

Welcome to Wrestling Republic’s Scouting Showcase, a new series which will introduce fans to up and coming wrestlers, from around the world. In this first article, we take a look at Dungeon Wrestling’s Mo Jabari.

Dungeon Wrestling is a new promotion based out of Calgary, Alberta Canada. Launched by a local trio consisting of Blade & Dallas Hart and Indie wrestler Mo Jabari.

Wrestling fans may recognize the names Blade and Dallas Hart, sons of WWE Legend Bret ‘Hitman’ Hart. But who’s Mo Jabari, the third in this trio to bring the newest wrestling promotion to Calgary?

Mo Jabari aka Kid Chocolate is a wrestling superstar from Calgary that has been building a name for himself across the Indie circuit since 2017. A graduate of Lance Storm’s SWA (Storm Wrestling Academy) has competed in promotions across Canada such as RCW (Real Canadian Wrestling), PWA (Prairie Wrestling Alliance) and ACW (Apex Championship Wrestling).

Inspired by wrestling greats like Bret ‘Hitman’ Hart and Randy Orton. Mo Jabari a Kenyan refugee, found a passion and future career in trying to emulate those childhood hero’s.

He’s now in a place where he can say “I wanna be able to do this wrestling thing for a living and to be able to tell people if I made it then anyone in the world can. Especially if you know where I came from.”

Raised by a single mother who in his words “is the strongest woman alive”. He’ll be the first to tell you she is his true inspiration.

They were able escape what he describes as “quite possible the worst place in the world.” Where day to day survival was never a guarantee. “It was a place where you had to survive to the next day or otherwise you’re history and left behind or killed.”

Fastforward to today and we find Mo Jabari as one of the driving forces behind Calgary’s newest wrestling promotion.

“Dungeon Wrestling is a place where guys and girls can come to and have great matches and work with some of the best in the world.”

What’s next for Mo Jabari

Recently Mo Jabari wrestled matches on both WWE and AEW in less than a month. A rare feet for any wrestler to achieve.

First we found Mo on the September 26 episode of Monday Night Raw where he wrestled ‘The Nigerian Giant’ Omos. Unfortunately this was a bit of a squash match for Jabari.

Speaking of the match Jabari recalls “Omos is a monster and killer I’m glad he didn’t kill me and spared me. He’ll be a champion in the WWE soon.”

Then 3 weeks later Mo Jabari was in a tag team match on AEW Dark. In this match he found himself paired with Jake O’Reilly to face off against Eddie Kingston and Ortiz.

Recognizing what these opportunities had to offer he said “That was an amazing experience and something that makes me wanna work even harder than I have been. Because I’ve seen what it takes to be at that level. Even though I was just an extra it was still an experience I won’t forget and one that has me motivated.”

On top of these appearance Mo Jabari was part of Bret Hart’s ‘Hart Attack’ wrestling tour 2022. Which had him touring around North America and wrestling with names like Dax Harwood & Cash Wheeler.

When Mo isn’t wrestling he can be found training with the likes of WWE’s famed ‘Hart Dynasty’ TJ Wilson aka Tyson Kidd and Harry Smith. He’s even had moments to get words of wisdom from his wrestling inspiration Bret ‘Hitman’ Hart.

Mo Jabari is the perfect example of the successes of perseverance, strength and determination. When asked if he had anything to say to his fans,

“I’m Mo Jabari aka Kid Chocolate and I just wanna say I’m a guy for the people, I love wrestling and I hope wrestling loves me back.”

With his appearances on WWE and AEW. Plus the steady growth of Dungeon Wrestling and his busy touring schedule. It’s safe to say Mo Jabari has found his way.

Keep an eye on WrestlingRepublic.com for more wrestling spotlights of up and coming future superstars.