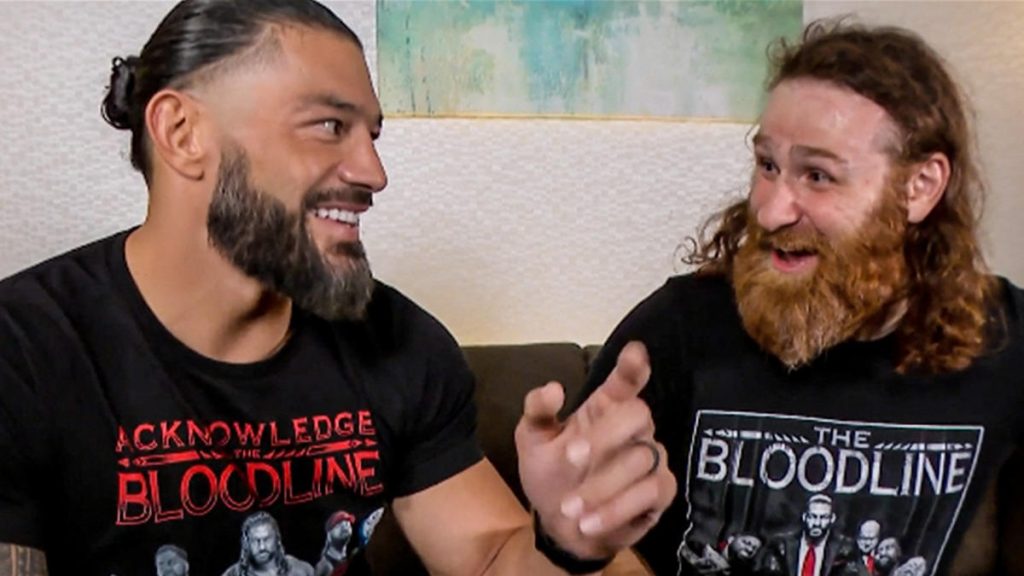 Since joining The Bloodline back in May Sami Zayn has become the highlight of many Bloodline segments. Whether he’s joining The Usos or Solo Sikoa at ringside or making up his own words like “Ucey”. Sami Zayn has managed to create moments of comedy gold that have even made fellow Bloodline members break character and laugh during a segment. He’s managed to impress ‘The Tribal Chief’ so much that in September he was awarded the official title of ‘Honorary Uce’.

Recently the Undisputed WWE Universal Champion Roman Reigns commented on Sami Zayn’s role within the Bloodline. Speaking with The Ringer, Roman Reigns said that he believes he’s responsible for elevating the members of ‘The Bloodline’.

“That’s one of the top responsibilities of being the top guy is we never work down. It’s only about bringing people up and making them better.” Reigns said.

Recognizing the impact on being able to elevate other talent “Look at all the characters around me. Look at how strong this character is to be able to be the centerpiece of so many amazing talents.”

‘The Tribal Chief’ continued by speaking about the impact Sami Zayn has made on ‘The Bloodline’ “I mean, look at Sami. He unlocked a different door, which allows us to showcase different layers.”

He praised Zayn by saying “He gives us something completely different to play off of. And vice versa, for Sami to be at the cool-kid table, in the cool clique. Being able to showcase that story, that’s what makes us next level. Who would’ve thought ‘Ucey’ would be a thing? But over 12 million people on social media made it a thing, and that’s the type of power we have.”

Sami Zayn isn’t the only reason The Bloodline has been such a success. Roman pointed out how The Bloodline succeed as a faction. “We can take anything, anything, and make it good. That’s why the Bloodline, the Tribal Chief is so special. Because we’ve taken more chicken s**t and made chicken salad than anybody in the history of this business.”

The Bloodline are set to battle The Brawling Brutes, Drew McIntyre & Kevin Owens in a WarGames match at this years Survivor Series. Keep an eye on WrestlingRepublic.com for any updates or news on The Bloodline and Sami Zayn.