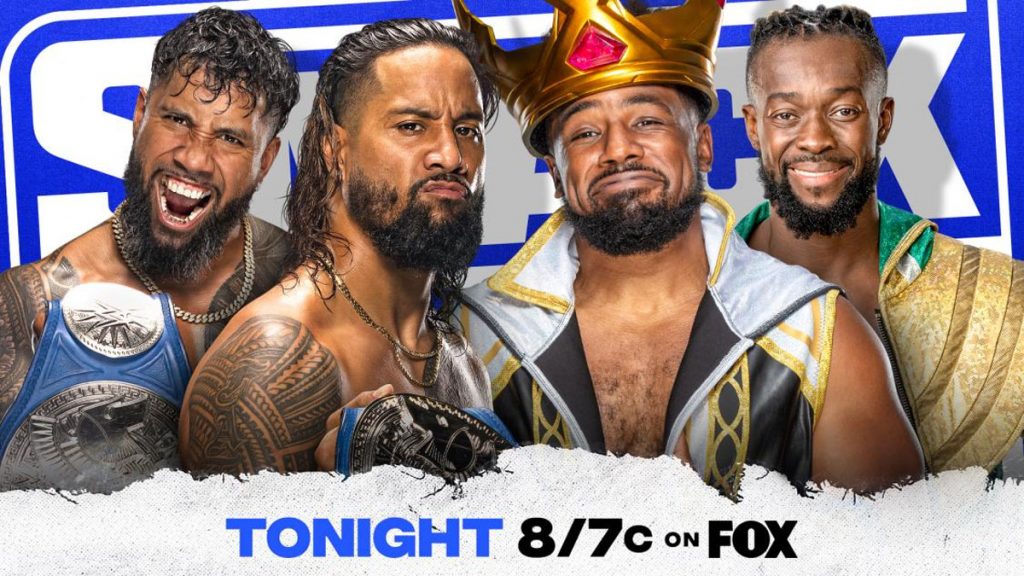 John’s out for the night! I’ll be doing Smackdown tonight.

Preview: After Roman Reigns had announced that he was unable to compete, WWE called an audible giving Brock Lesnar the WWE Championship at the Day 1 Premium Live Event. After Bobby Lashley won the number one contendership for the Royal Rumble, Brock Lesnar was unfazed and said he would see Roman on Friday. With Paul Heyman back in Brock’s corner, this storyline continued to heat up. Outside of the Universal title picture, we will see if The Usos and New Day finish off their rivalry with a main event street fight. Will Sami Zayn Vs Shinsuke Nakamura happen after being mysteriously pulled from Day 1? And What is next for Happy Corbin and Madcap Moss as Drew was apparently written off Television. Let’s hope Smackdown starts off the year right.

Roman Reigns opens the show entering and stating he doesn’t want to see Brock or Paul ever again and Brock’s theme hits. Brock continues to poke fun at Roman Reigns saying his lines, Roman calls Paul Heyman trash and the bantering continues with Brock turning to talk to Heyman, Roman Superman punches Brock and walks out.

Overall this promo worked out as a good promo, but I think there is a little confusion with Roman defending Paul, and Paul defending Roman still. Nothing too spectacular with this promo but it did its job having Roman stand tall as it’s becoming a stronger idea that they still want and aim to do Brock Vs Roman at Wrestlemania.

Sami uses the match being pulled as a way to claim Shinsuke is “ducking” him. Before seeing Johnny Knoxville further down the hallway. Sami disrespects Knoxville claiming he doesn’t have the skill and the qualifications to be in the Royal Rumble before going to do his entrance.

It’s somewhat good that they are making Johnny Knoxville in the Rumble as a story and not just some pointless cameo in the match itself. Hopefully, he can have a fraction of the success Bad Bunny had last year.

Match starts off with Rick getting some offense before going to commercial break where Boogs was still ragdolling him around once they came back. Boogs was made to look very good and as Sami Zayn was taunting Shinsuke, Boogs took advantage for the victory.

This match was getting good with the crowd getting into it. Overall the match being shorter hinders the rating, but matches on WWE TV are always very limited.

After the match, Knoxville threw Sami over the top rope to qualify officially for the Royal Rumble.

RKBro Vs Alpha Academy is announced for Raw as a tag team title match between Charlotte’s entrance and her promo.

This gets a “good“ just because of the sure fact that they announced some women’s rumble entries including shocking ones like the Bellas, Mickie James, and Lita.

The match started before the commercial came back. Decent action before Sonya Deville comes out and says Naomi can’t win via count-out and Charlotte takes advantage after that. (With the news of Mickie James blowing up social media and the WR group chats, I haven’t paid enough attention to this match) Sonya continues to screw with Naomi as she gets a rope break, saying the match is no disqualification now. A unique method of Natural selection for the finish of the match.

Some good action with a slight overbooked feeling of the Sonya Deville stuff. Aside from Sonya Deville abusing her power stuff it hindered the match rating as well. The Action was great, but the main focus of the match was not the match itself, it was Naomi and Sonya’s rivalry.

Both interviews were short and sweet but together they can be rated as one. Nothing too spectacular as they continue to bill their street fight as the match that ends the rivalry.

Roman’s Rumble opponent is going to be announced later in the night, via Adam Pearce’s choice.

Happy Corbin continues to have good delivery with his promos, doing what they are supposed to do. Madcap is mocking Drew by dressing like him and having a toy sword. Madcap is decent with a Scottish accent. Viking Raiders storm the ring as they set up a tag team match.

This match was short and had a couple of decent moments, with Moss running the ropes as fast as he could. Nothing spectacular in this match. And it is completely skippable.

GREAT: The Usos Vs The New Day – Street Fight for the Smackdown Tag Team Championships.

This is what you expect from the Usos and the New Day. An awesome and fun contest between the two teams. Not too much weapon involvement, Fun crowd and table spot. The match wasn’t on the level of their past matches or the Day 1 match, but the match was enjoyable.

Results: Usos win with the 1D through the table.

GREAT: To close the show, Seth Rollins enters Roman Reigns Locker room confirming the title match is Roman Reigns Vs Seth Rollins at the Royal Rumble Premium Live Event. This had an atmosphere that was really good, so a fun way to end the show was the Roman and Rollins stare down.

Overall Smackdown started off the year with a solid Smackdown having some fun in-ring action and some fun/exciting announcements towards the Royal Rumble Event. We saw an awesome main event where the Usos and New Day prove they always deliver. There was nothing to complain about. Smackdown is needing stars and it is showing because they are having Roman Reigns Vs Seth Rollins for the Rumble event. WWE opened the “Fed”bidden Door announcing Mickie James to be in the rumble with the question of if she will represent the Knockouts Division as their champion come the end of the month. It is Royal Rumble Season and things are getting interesting with the company that needs it the most.