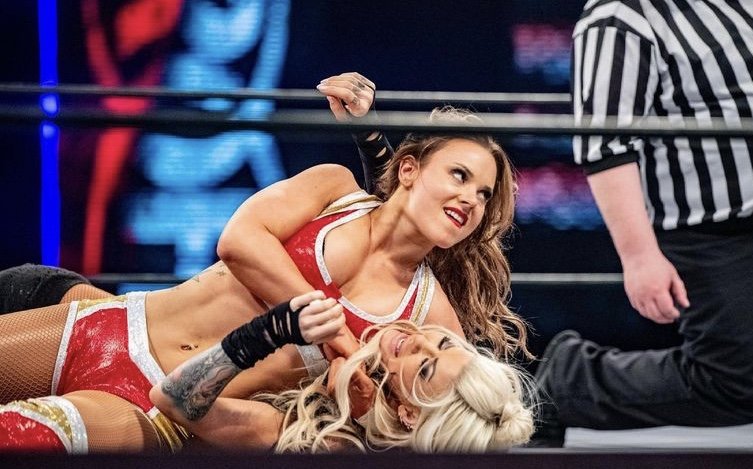 After a stellar episode of ROH TV last week, this week the company hoped to keep the momentum going as more and more eyes have turned towards the promotion as of late. The main event of this weeks show was set to be Quinn McKay making her highly anticipated Ring Of Honor in ring debut against ROH veteran Angelina Love.

GOOD: Ian Riccaboni kicked off the show by building up and revealing tonight’s action. Unfortunately he didn’t quite build it up as well as Quinn usually does, but in fairness her shoes would be impossible to fill.

GOOD: Backstage Quinn McKay interviewed the Briscoes ahead of their match against EC3 and Flip Gordon. The Briscoes cut a typical signature overly charismatic Briscoes style promo and reminded the team they haven’t forgotten about what happened at the last PPV. It’s interesting to note that neither EC3 or Flip Gordon were interviewed before the match, or even had a promo package. Considering this has happened before every match in ROH as of late, especially the big ones, it’s interesting why neither men did get a chance to cut a promo, especially with how great EC3 has been on the mic as of late.

GOOD: The match between the Briscoes and the team of EC3 & Flip Gordon built around the story of Flip wanting to use heel tactics, while EC3 condemned them because of the respect the Briscoes had earned off him. The match wasn’t an instant classic or anything of the sort, but it was decent, told a good story and everyone involved performed extremely well. In the end Flip Gordon used a chain to get the upper hand without EC3 knowing, before EC3 hit his finishing manoeuvre to get the shock win.

MUST WATCH; Brian Johnson cut the promo of his career in a pre recorded promo package where he explained that once he’s done, you will have to mention his name before Punk, Joe and every other legend in ROH history. The promo noted that despite being 4-1 in 2021 in Ring Of Honor, he has barely been given any respect despite the fact he should be in TV title contention. He announced he would host an open challenge next.

GOOD: Danhausen, the one responsible for Johnson’s single loss in 2021, answered the open challenge and in a typical Danhausen promo filled with madness, he revealed that it wouldn’t be him answering the challenge, and instead it would be PCO.

BAD: As someone who has not watched PCO for a while, and always considered him somewhat underrated, I had a good feeling about this match. But I was wrong. Very wrong. There was a communication error between the two on several occasions during this match, and the entire PCO ‘malfunctioning’ thing was an embarrassment to the promotion who as of late have done a phenomenal job at presenting a sports like product, better than nearly any company in wrestling. The fundamentals of the match were fine and moves were sold, and a story was conveyed, however the fact Johnson kicked out of the PCO moonsault, which nobody has every kicked out of in ROH according to the commentary team, just to then be beaten by PCO anyway, is beyond stupid, especially for a match half way through a weekly TV show. Some would even say I’m being generous rating this segment just ‘bad’, but realistically the fundamentals were fine and a basic story was told well.

GOOD: Ahead of her match with Quinn McKay, Angelina Love cut a well performed traditional cocky heel styled promo where she clearly didn’t take Quinn seriously at all. One could make a possible argument that because of this promo it was obvious Quinn was going to exceed expectations, however these days in wrestling the story has been done so many times it’s obvious anyway.

MUST WATCH: Just before the highly anticipated main event, Quinn McKay performed her own backstage promo, and my oh my, this was amazing! Quinn made the upcoming match seem far far more important than it actually was, and that this was about to be the deciding point in her career.

GOOD: The main event between Quinn McKay and Angelina Love was fairly predictably laid out, with Love predictably underestimating Quinn, but still managing to have her seemingly beat in a submission early in the match. However Love released the submission to humiliate McKay more, but this led to her managing to get back into the match. Towards the end of the match Quinn actually had Angelina seemingly beaten in a submission which was extremely reminiscent of the spot earlier on in the match. However this time Mandy Leon got involved by insulting Quinn at ringside, leading to Quinn releasing the submission, attempting to try and shut Leon up once and for all, however from behind Love hit McKay with the Botox Injection to win the match. Fairly basic heel vs underdog storyline here, but was performed well.

Overall this episode of ROH wasn’t by any means bad, and did progress stories successfully. However the in ring action throughout the episode was significantly weaker than usual, and possibly the weakest of 2021 so far. The PCO storyline was awful and sadly it does appear his age is beginning to catch up to him, however still looked safe within the ropes, which is more than what can be said for quite a few wrestlers nowadays. This episode scores a 6.8/10 on the Wrestling Republic Scale.