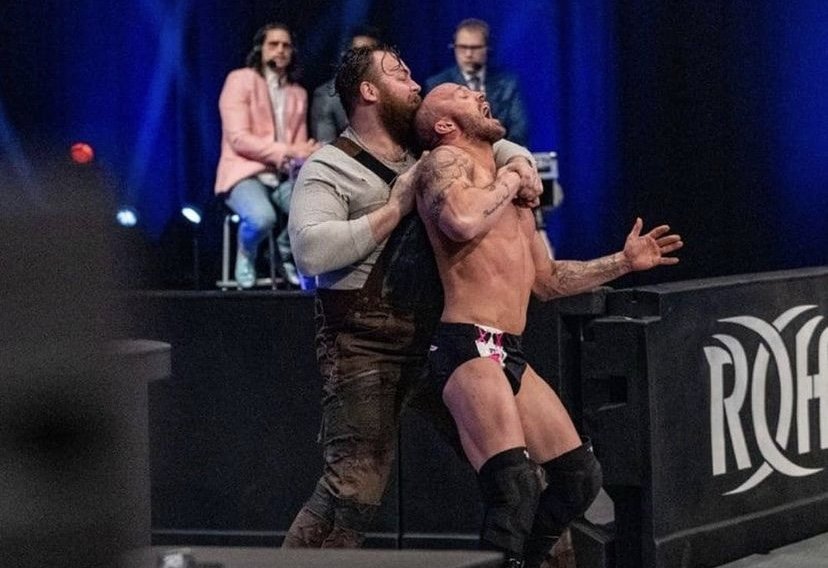 After an episode based largely around Quinn McKay’s return to the ring last week, ROH looked to explore their other storylines this week, as well as continuing to create new stars in an unranked battle royal

GOOD: Ian Riccaboni opened the show, once again filling in for Quinn McKay. He stated that Quinn was at home recovering from her loss last week. Riccaboni then ran down the card creating some excitement for the nights events, not as much as Quinn does, but still he did his job successfully.

POOR: The show opened with a battle royal. As I have stated on multiple occasions, battle royals are one of the hardest match types to pull off, yet every company under the sun seems to want to do one every month. The PCO malarkey in this match was once again horrible. For his age PCO performs well, but the robot gimmick is the worst thing in ROH at the moment, and is quite frankly an embarrassment to the sports like product.

RESULT: Keys & LSG are the last two standing meaning they will face each other on a future episode of ROH TV

GOOD: Quinn McKay interviewed Shane Taylor promotions backstage and Shane Taylor spoke about how he wants to give new stars a chance. Well delivered segment here, but absolutely stupid how Quinn did the interview considering at the start of the show Riccaboni said she was at home recovering…..

GOOD: Shane Taylor Promotions defended their 6 Man ROH Titles against Primal Fear. This encounter gave Primal Fear a strong showing in what was an exciting match. In the end STP proved once again they are the standard in the 6 man division, as they got themselves another defence.

GREAT: Silas Young sat down for an interview where he talked about why he turned on Josh Woods several weeks ago. Silas stated that for years he has done everything for the promotion, yet people are now calling him selfish for what he did to Woods.

GOOD: This was followed up by Woods also having a sit down interview. However Woods could not express how he was feeling, and was unable to get a single word out. However sometimes silence can say 1000 words, and in this interview it absolutely did.

GREAT: In the main event Josh Woods attempted to get revenge on his former partner Silas Young. Young attacked Woods before the match and slammed his midsection on top of the barricade. For the majority of the match Young worked on the midsection of Josh Woods after the damage caused by the pre match attack, however Woods battled through the pain and kept fighting. In the closing sequence, Woods had Young in an arm bar, but Silas Young used the ropes to roll himself into a pinning position leading to the victory. The referee was so focussed on the pin, he did not notice Silas illegally used the ropes to his advantage. A good finish which protected Woods and showed Silas Young’s experience.

Overall this weeks episode of ROH TV was solid, however the battle royal negatively affected the show. ROH did a good job of continuing to build up new young stars, as well as continuing existing storylines. Primal Fear got a chance to shine on television, despite being beaten by STP, and the finish to Silas Young and Josh Woods was done extremely well. One issue I have noticed as of late on ROH TV is that certain storylines, in this case Young and Woods, aren’t being mentioned for weeks, until the episode of the match between the feuding competitors. This makes certain storylines hard to keep up with, and a more in depth video package explaining each feud before the match would really help casual fans keep up.