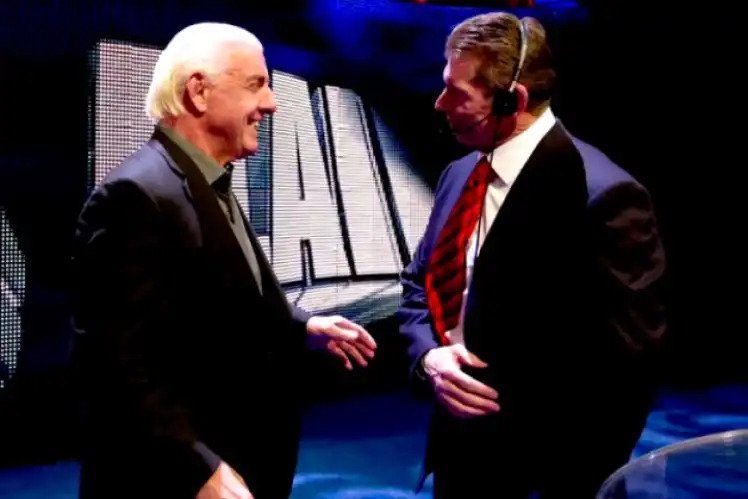 Ric Flair wants Vince to attend his last match on July 30th and to use their history to roast him.

Last week Vince McMahon made headlines once again when he shockingly announced his retirement from all roles in WWE. The news came almost two months removed from the reveal of a scandal of payments to cover up illicit affairs.

It was a historic day in the wrestling industry as Vince brought the WWE to mainstream prominence and built a billion-dollar empire. Many issued their respects and thanks for the now former chairman, Ric Flair included.

The Nature Boy is two days away from having his last ever match in Nashville, Tennessee against Jay Lethal and Jeff Jarrett. Ric’s son-in-law Andrade El Idolo will be his partner, and his daughter Charlotte, along with various other WWE stars, will be in attendance.

Ric also wants his now retired long-time boss in attendance, and he also wants him to take part in his roasting. While speaking on his “To Be The Man” podcast, Flair revealed that he is currently pulling for Vince to make fun of him at the event.

“I’m trying to get [Vince] to come to Nashville now. I want him to roast me. He certainly has in real life enough! ‘Hey, these heels don’t draw, you stupid son of a bitch. Don’t ever bring a lawyer to see me. I don’t like lawyers. Who are these two jackoffs?’ (H/T Ringsidenews.com)

Based on numerous stories and their long history together, there is likely no shortage of stories and jokes Vince can tell. Despite whatever beef Ric has had with WWE in recent years, his respect for McMahon has never diminished.

Ric’s last match will take place this Saturday at the Municipal Auditorium in Nashville. Fans can watch his last bout and all the other matches on the card through Fite.com.