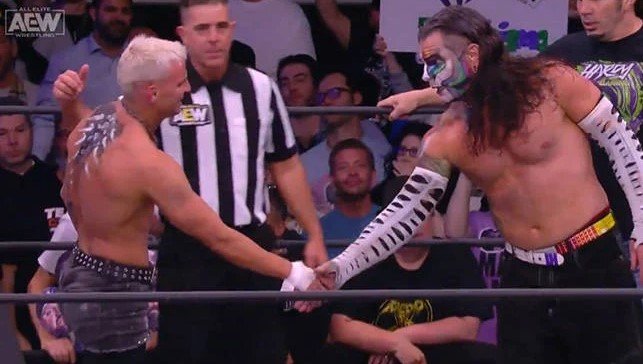 The match between Hardy and Allen was praised by the wrestling legend.

At last night’s AEW main event, we witnessed a great match between Jeff Hardy and Darby Allen as part of the Owen Hart Foundation Tournament Quarterfinals.

Both men put their everything on the ring, using their signature movements, as well as other weapons like chairs, ladders, and more.

The main spot was Darby Allen doing a Swanton Bomb from the top of the ladder, landing on Jeff and a number of metal chairs, leaving all the fans at the arena with their mouths open as well as the spectators at home.

After the match ended, with Jeff Hardy as the winner, Ric Flair took Twitter to praise the match, especially Jeff.

“You Have EXCEEDED ALL GOALS,” he said.

Since his debut at AEW back in March, Hardy has continued to show his potential and talent in the ring, both alone and alongside his brother.