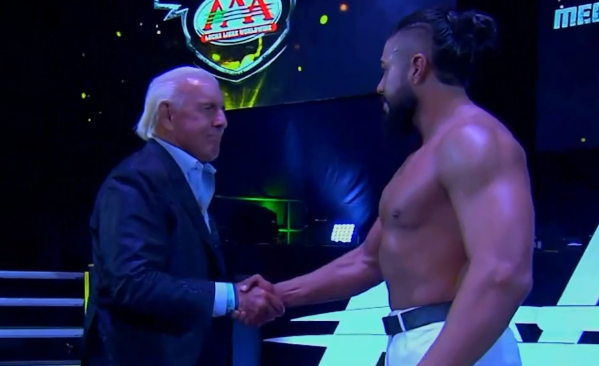 “The Nature Boy” Ric Flair appeared at Triplemania XXIX on August 14th to manage Andrade El Idolo during his match with Kenny Omega.

However thats not all the former 16 time World Champion did. There was a spot during the match where Flair and Andrade traded chops on Omega and eventually put both Omega and Konnan into figure four leg locks. Omega eventually retained the AAA Mega Championship, pinning Andrade with a One Winged Angel.

Ric Flair was recently released by the WWE, with some reporting it was due to disenchantment with his own booking, whilst Dave Meltzer reports it was due to Flair’s concern over Charlotte Flair’s booking.

Ric Flair has teased returning to the ring in recent days, with Flair via Twitter posting training photos and stating that he will never retire.

It has been reported by Dave Meltzer recently that it is likely that Ric Flair will join AEW when he is legally allowed to do so. Meltzer has also reported that Andrade is keen on having both Ric Flair and Charlotte Flair with him in AEW.