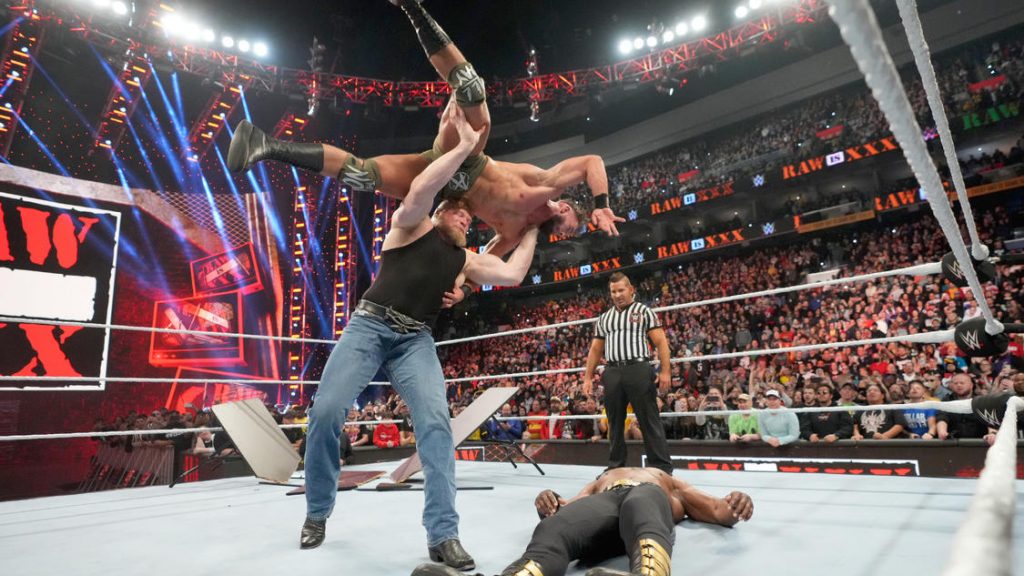 Although the first half of the show was off the charts great television, the second half was falling flat with the alright imperium six man tag. As well as Sonya Vs Bianca seemingly draining the life out of the crowd. Bray Wyatt got his torch passing moment with the Undertaker. Ultimately aside from Sami Zayn getting his chance to team with Jey on a spur of the moment decision. The in ring action was basic and normal from a typical raw. The show was very solid and for an anniversary show it was tremendous while advancing current stories as well. An Anniversary show isn’t meant to have over the top in ring action but it is to relive and enjoy nostalgia and this show did deliver.

Real American was the first theme to hit the speakers as Hogan came out with Jimmy Hart. Having microphone issues during Hogan’s words before a production manager comes out. Hogan tells the story of Raw starting before saying his signature “____ run wild on you” lines. Also getting a pop by mentioning the Philly Eagles. After Hogan came the promo video showcasing top moments and highlights of the brand.

PERFECT Tribal Court with the Trial of Sami Zayn:

The bloodline entered the ring first with Sami Zayn choosing not to participate in holding the one up. Roman tells Philly to acknowledge him before all members of the bloodline raise up the one. Heyman recalls ECW but claims ECW is dead and wants the same for Sami Zayn. Paul continues to target Sami Zayn calling him a betrayer and a judas. Hitting the signature “BROOOOCK” for Brock Purdy to target the Eagles.

Exhibit A showed Sami Zayn running away from Drew beating up the Usos. Right after, Exhibit B was showing Sami fail to hit Kevin with a chair. Exhibit C was at War Games with Sami Zayn saying he was Bloodline “For Life”. Exhibit D showed Sami Zayn give a “ high school shoulder block” to Roman.

Sami was able to express emotions about how Heyman hurt him. Before saying his defense is having no defense. Roman yells at Solo but before Sikoa can Spike him, Jey Usos grabs the arm of the enforcer. Jey Usos has his one defense show moments where Sami was beneficial to the Bloodline. Only the defense went to Exhibit E. Jey brought out real emotion from Sami Zayn as he was tearing up. Uso calls Sami bulletproof as Jey is truly going to bat for Zayn. calling for all those in favor to keep Sami in the bloodline to throw the one up. With The Usos putting the finger up. Roman tells Sami Zayn that he is not guilty for now, with Jey buying Sami more time.

This is storytelling at its finest, being able to really make you feel for Sami before jumping out of your seat seeing Jey Uso pop up and defend Sami. I can’t make this anything other than 5 stars.

Results: Sami Zayn by being declared Not Guilty via Jey Usos’ defense.

Dominik becomes the distraction needed before Priest pounced Jimmy onto the announce table. Quick tags from the Judgment Day duo. Mysterio gets caught with a Jey hip attack. Jimmy gets a tag without Damian being aware of it as they get a double chokeslam like move. Priest goes on a roll getting a broken arrow before getting a step up dive to the outside onto both Usos. Damian hits a rebound clothesline before Jimmy kicks out. Judgment Day set up hitting a doomsday device on Jimmy. The Usos hit a sequence of superkicks taking multiple double superkicks to take out Priest. Jey gets pulled off the top ropes by Finn, before Balor gets ejected to the back. Jimmy Usos “tweaks” his knee before Sami declares Sami Uso can enter the match. Adam Pierce allows Sami to tag in for Jimmy before Sami and Jey go to the ring. Both teams enter a melee including Sami diving out to Judgment Day. Rhea Ripley nearly causes multiple interruptions but Sami Zayn and Jef Uso get the win with the one D.

La Knight challenges any legend who has the balls to come out and live off of their glory with him. Before LA Knight says there is nobody the most majestic dong hits. But as the moon moves across the tron, the screen shows American Badass. The American Badass comes out with the motorcycle and all. LA Knight says he is going to let Undertaker off the hook. LA Knight tries saying its his game before the lights go out. Wyatt appears and chases him into the ring. Taker grabs his throat before Wyatt gets on the apron. Taker throws LA Knight to Bray as Bray gets a sister abigail. Bray and Taker have a staredown before Taker leaves on the motorcycle.

Damage CTRL attacks Becky on the outside of the ring before the match starts. Bayley and the trio completely take out Becky Lynch without the match even started.

Road Dogg gets the first lines with the classic run. With Road Dogg going to say Bad Ass Billy Gunn, they notice it was Kurt. Kurt says he always wanted to be in DX. As they prefer to say the line, Imperium comes out. Triple H goes to size up Gunther but says he is retired. All of DX claim they won’t engage in a fight. The crowd chant for Kurt as Triple H tries to throw him under the bus. Seth Rollins’ burn it down hits the speakers as the crowd serenade him. X Pac says there is one Seth and three Imperium. The Street profits come out to join Seth’s side. As DX looks at Triple H to be the booker, Teddy Long shows up giving the signature TAG TEAM MATCH PLAYA. DX ignores Kurt before Kurt takes his DX shirt off to reference a red, white and blue ref shirt.

Seth Rollins starts the match off before the Profits take control of Vinci. Kaiser and Angelo get hot tags for Seth and Gunther. Before the commercial, Seth gets chopped mid air by Gunther and a neck twist. Montez and Vinci get tagged as Ford gets chops and a jumping clothesline in. The profits look in ankle locks before Gunther breaks them both off. Gunther gets in Kurt’s face before Rollins sends him out of the ring. Seth conducts the profits diving out of the ring before getting chopped and drop kicked. After a Montez frog splash and curb stomp, Seth pins Vinci for the win.

Results: Seth Rollins by Pinfall via Curb Stomp on

Ric Flair, thanks the WWE before he introduces Charlotte Flair. Charlotte names The Bellas, Asuka, Ronda and Rhea Ripley as names that have helped her become the greatest Women’s athlete. Charlotte says she is the smackdown women’s champion, but Raw is always her home. Bianca Belair shows up. Bianca says she is the reason Raw is the greatest show. Sonya Deville comes out. Charlotte ends up telling Bianca to take care of Sonya and a match is made.

This match had some decent stuff but the crowd just could not care any less about the match. The crowd was cold. Bianca gets the win and thus another loss in the column for Sonya. After the match, Bianca Belair says what she did to Sonya is a preview for Alexa. Alexa appears on the screen before promising Bianca that she would spare her eyes so Bianca could watch Alexa walk out as champion.

Poker 1: Baron Corbin and JBL head to the poker lounge but Corbin gets called a stooge by the Godfather and Farrooq. Corbin pays his way into the poker tournament before being walked in by the owner of the establishment.

Poker 2: DDP beats Medusas with a straight flush as they continue the poker tournament.

Poker 3: After Corbin beats Ted in the tournament but “IRS” takes the money as his taxes. The signature DAMN is said after “IRS” took all the money.

Lashley starts off hot, hitting the firemans carry into the post before Raw goes to commercial break. Theory is in control, bringing both a chair and a table into the ring. Lashley gets a hurt lock but it doesn’t last long. Austin is thrown into the chair that was wedged in the turnbuckle before Lashley set the table up. Theory uses a fire extinguisher to take control of the match. Back from the commercial, there is a second table set up in the ring. In the hurt lock once again, Austin hits a mule kick to kick Lashley in the balls. Theory is slammed through the one table before Brock Lesnar’s theme hits. Brock gives Lashley an f5 before f5ing Theory onto Bobby. Theory retains.

Results: Austin Theory by Pinfall via Being F5’ed onto a fallen Lashley.

Although the first half of the show was off the charts great television, the second half was falling flat with the alright imperium six man tag. As well as Sonya Vs Bianca seemingly draining the life out of the crowd. Bray Wyatt got his torch passing moment with the Undertaker. Ultimately aside from Sami Zayn getting his chance to team with Jey on a spur of the moment decision. The in ring action was basic and normal from a typical raw. The show was very solid and for an anniversary show it was tremendous while advancing current stories as well. An Anniversary show isn’t meant to have over the top in ring action but it is to relive and enjoy nostalgia and this show did deliver.

Photo Credit: (Wwe) For inquiries about the rating criteria check out the article announcing the new system here: