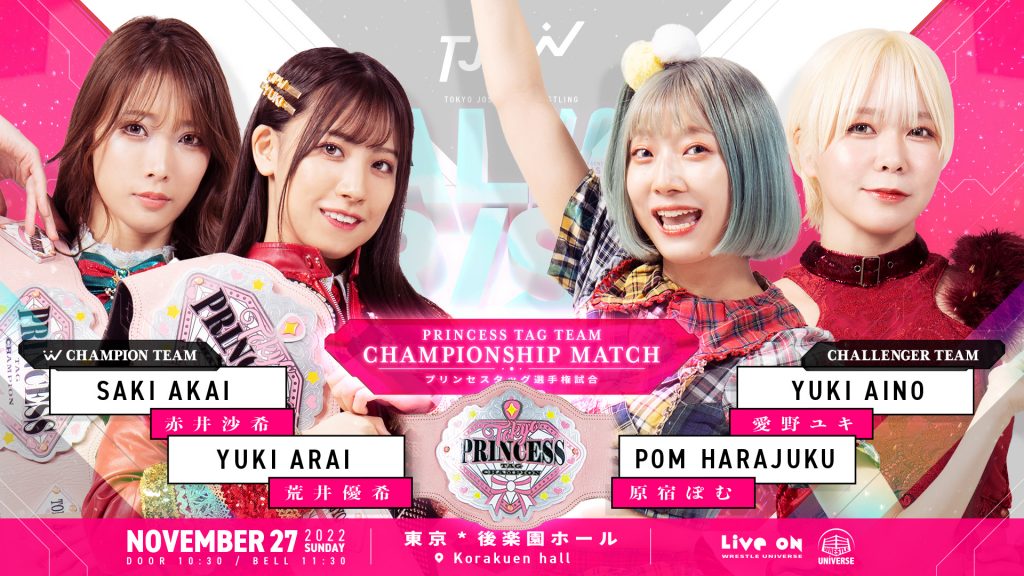 As noted recently on social media, Raku will be missing TJPW ALL RISE ’22 due to testing positive for COVID-19, with Pom Harajuku taking her place in the Princess Tag Team Match.

Tokyo Joshi Pro-Wrestling is just a few days away from hosting a new PPV event, which will be TJPW ALL RISE ’22. This event definitely promises to deliver many great matches, with the Princess of Princess Title Match and the Pro Wrestling EVE Championship match headlining the card.

In addition to the previously mentioned matches, the TJPW Princess Tag Team Title Match was also one of the most attractive matches of the card. This match started to build up when Yuki Aino & Raku issued a challenge to the reigning Princess Tag Team Champions, Saki Akai & Yuki Arai, on November 13th’s City Circuit Autumn.

However, as noted recently on social media, Raku has tested positive for COVID-19 and has been pulled from TJPW ALL RISE ’22. Additionally, TJPW revealed that Pom Harajuku will be replacing her in the Princess Tag Team Title Match.

Through a statement made on their official website, the promotion shared the following message:

Raku was scheduled to participate in the Korakuen Hall event on November 27th, but the PCR test was positive. As a result, she has been pulled from the event. Regarding the return, we will monitor the progress and report again. We apologize for any inconvenience caused to the fans who were looking forward to Raku’s match, but we appreciate your understanding.

The Princess Tag Championship match was scheduled, but instead of Raku, Pom Harajuku will become Yuki Aino’s partner and take on the challenge. It will be Pom’s 4th anniversary since debuting on November 24, 2018, and this will be her first title match.

Additionally, Raku also took to Twitter to share the following message: “I became corona positive and had to withdraw from the Korakuen event. I apologize to all the fans who have been looking forward to it, and to all the people involved. I don’t know where I got it from and I’m very disappointed. I’m really sorry, I wanted to do my best.”

Everyone here in Wrestling Republic would like to send its best wishes to Raku on a healthy and speedy recovery.

With the changes made to the card due to Raku’s withdrawal, the complete TJPW ALL RISE ’22 official matchcard reads as follows:

Stay tuned to Wrestling Republic, since we’ll be covering the full results of TJPW ALL RISE ’22 and updating you with everything you need to know about Tokyo Joshi Pro-Wrestling.