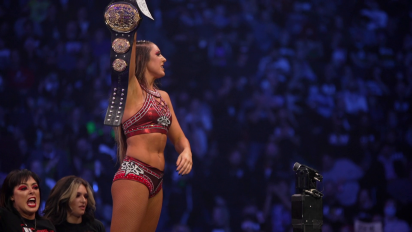 It’s Saturday, you know what that means. Battle of the Belts, an hour long TNT Special presented by AEW from Charlotte, North Carolina. Lined up for the show we got Britt Baker defending her AEW Women’s World Championship against Riho, Ricky Starks taking on Matt Sydal for the FTW Championship, and then, Dustin Rhodes going against Sammy Guevara for the Interim TNT Championship due to Cody Rhodes being out for medical purposes. Ladies and gentlemen we sure are in for a good show, so let’s get started. Oh, and I would like to say, this is our first review written while live at the show!

GREAT: Opening the show, we instantly go to Dustin Rhodes taking on Sammy Guevara. The two start off with a handshake and instant back and fourth action. Sammy gains control early on. He makes a gun gesture towards Arn Anderson before he’s given the bird. Dustin gets Sammy down on the outside and rolls out. Sammy narrowly avoids getting counted out before Dustin continues to get the best of the Spanish God. Sammy is able to regain control of the match, knocking Dustin out of the ring. Guevara dives to the outside, wiping out both me. Dustin is able to once again able to overpower the smaller man, and hit a cross rhodes for a near fall. Guevara then picks up Rhodes, hits a GTH for a near fall of his own. Fuego Del Sol then appears, sets up a table for Sammy, before being chased off by Arn Anderson. Sammy is then put through the table by a Canadian Destroyer at the hands of Dustin Rhodes, and then kicks out of the pin afterwards. The two go back and forth before Dustin eventually rolls Sammy up, however before the ref can count 3, Sammy reverses into a roll up of his own, winning the match. The two men shake hands after the match.

After the match, Daniel Garcia attacks Sammy Guevara, Sammy then appears backstage with Tony Schiavone, and announces that he will defend his TNT title against Daniel Garcia on next week’s Dynamite.

GOOD: Britt Baker DMD defended her AEW Women’s World Championship in the main event against Riho. This match was something else. Going into the match Riho had Britt’s number, as Britt Baker had never ever beaten Riho in a match. As soon as the match starts, the two go at it. While not as good as the opening match, This match was awesome. When it got towards the end, it seemed Riho had Britt beat once again, however Britt Baker was able to come back, hit a curb stomp, and successfully lock in the Lockjaw for the victory.

AEW hit it out of the park on this one and I am surprised. Going into this show, I was definitely nervous since before Friday, there were only 2 matches announced, but after witnessing it live and in person, I definitely went to bed happy that night. But this also opens a whole new series of questions. Who’s facing Britt Baker next? Will Sammy Guevara and Cody Rhodes go it one more time? Overall it was a very entertaining show and I cannot wait to see what happens next in AEW.