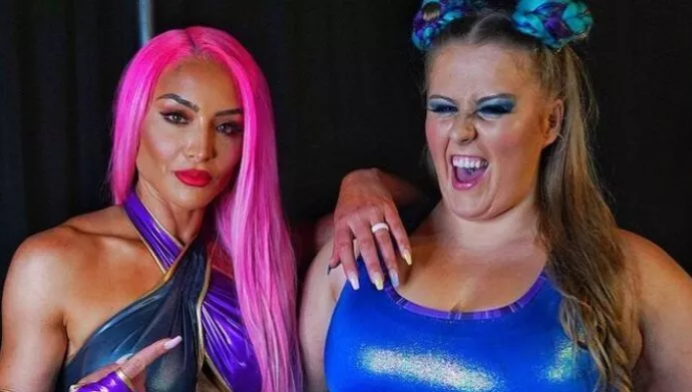 While knowing Eva Marie was set to return to a WWE arena tonight on Raw, it was only hours before the start of the show that WWE announced that she would be competing in a match against Naomi.

A decision that seemed to make sense. Naomi is familiar with Eva and a trusted veteran, however what went down was unexpected. Rumours quickly became certain once word of a “muscle” joining the leader of the #EVAlution. Mercedes Martinez was considered by some, but it was actually NXTUK Superstar Piper Niven entering behind Marie. Who by the way, is in FANTASTIC shape.

This in itself is actually a little bit of a historic moment for WWE and specifically NXTUK. There has never been an exclusive member of that brand to join the main roster seemingly full time. Rhea Ripley was champion there at a point, but also spent a good chunk of time in the American black and yellow brand. So congratulations to Piper. She’s also the second Scottish woman to pick up a win tonight, following Nikki Cross’ count out win over Charlotte Flair. A truly historic night!

During Eva’s entrance, Piper came out and slid into the ring like nothing was out of place, confusing Naomi and having the match instead, She actually beat Naomi in under 2 minutes.

It was odd to notice that the announcers acted as if they had no idea who she was. Sure she was in a smaller part of the company and not a champion, but even in Kayfabe you’d expect some information on this surprise debut. Without even a name, we’re lead to believe the character has received a name change. Fightful Select and Sean Ross Sapp have reported the potential change.

It is unknown what else WWE have set for this at the moment, but may perhaps take some getting used to as it is an unlikely alliance.