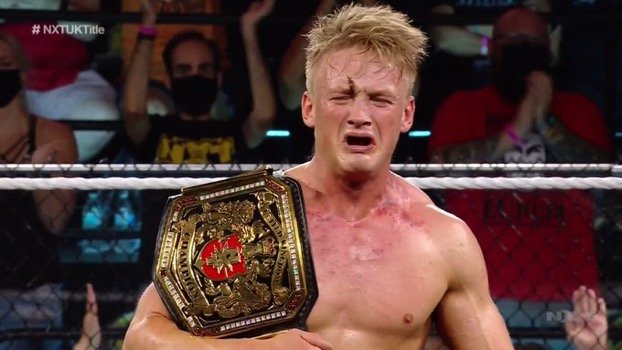 AVERAGE: Wolfgang defeated Sam Gradwell in an alright match two falls to one to move onto the semi finals in the UK Heritage Cup Number One Contender’s Tournament.

GOOD: A video package was shown highlighting Blair Davenport’s dominance from last week & then cut to Sid Scala who said that Davenport will be suspended due to her actions. This was good follow up after what happened last week.

GOOD: Kenny Williams and Noam Dar both had promo packages after that, hyping their match for next week & they are both great at promos, so this was very entertaining.

GOOD: Gallus were walking backstage & an interviewer asked Wolfgang how it felt to move on & Gallus started dancing and singing & then Jordan Devlin walked out of a door and started making fun of them until they walked away. This teased the beginning of what could be a great feud between Gallus and Devlin.

GOOD: Stevie Turner was asked backstage how she feels about her loss to Meiko Satomura & she said that now she knows how she can beat Satomura. Then, Emelia McKenzie walked up & said that she shouldn’t be bad mouthing the champion & that she will beat Turner next week just like Satomura did. This was simple, but effective.

GOOD: Pretty Deadly then had a vignette shown where they basically said they were going to beat Gallus next week. This match should be good.

GREAT: Ilja Dragunov vs WALTER was then shown, which this time included commentary from Dragunov himself & his thoughts about it. Others that gave their thoughts on the match during it were Cesaro, Rhea Ripley, Drew McIntyre, Finn Balor, Sheamus & hearing their insight was very cool. Not much I can say about this match that hasn’t already been said, but it was still amazing on rewatch.

This was not the best episode of NXT UK overall, but it was still enjoyable with a great rewatch one of the greatest matches in NXT history. The reason the match did not get PERFECT is because it was a replay of the orginal match. The six man tag was very very well put together and the opening match felt a little flat during parts of it.