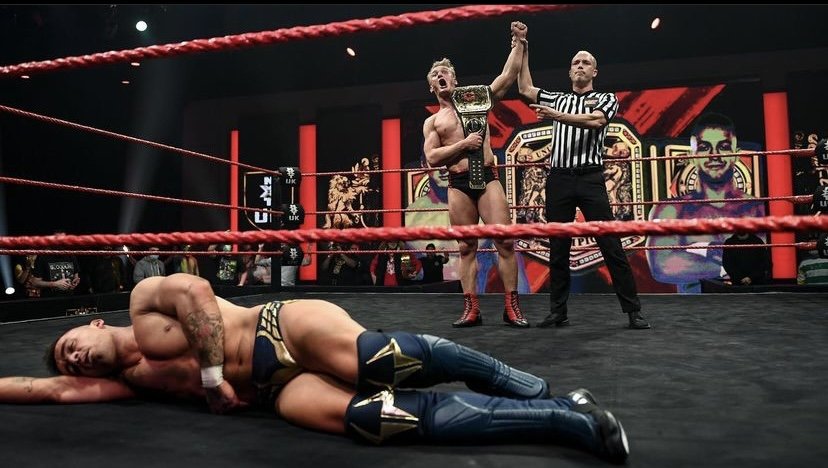 GREAT SQUASH: Blair Davenport defeated Stevie Turner in pretty quick fashion where she dominated the majority of the match. Davenport has been awesome since her debut.

GOOD: Sha Samuels prepared a celebration for Noam Dar because he won the tournament, except it turned out to say happy birthday. Dar told him it’s the thought that counts and they started talking about how good it’s going to feel when Dar wins the Heritage Cup. This was fun, as almost everything with Dar is.

GREAT: A vignette was shown between Teoman & Rohan Raju where Raju apologized to Teoman for Teoman taking a loss. Teoman told him he is the leader of the family so it is his fault & then he teased that they will have a new member of the family soon. This has a dark vibe to it and really worked.

GREAT: Jordan Devlin was in Sid Scala’s office backstage & Gallus barged in and Devlin told Joe Coffey they have a rematch and Gallus are banned from ringside. He went on to tell Coffey that he has headlined two takeovers and has accomplished nothing. He also said that a king has nothing on an ace. This was delivered so well.

MUST WATCH: Ilja Dragunov defeated A-Kid in an absolute battle of a main event to retain the NXT UK Championship. A-Kid worked on Dragunov’s arm the whole match & Dragunov worked on Kid’s leg. The psychology in this match was phenomenal.

GREAT: After the match, Ilja shook A-Kid’s hand as a show of respect and that was an awesome moment. He also held up his arm because it had been worked on for 20 minutes.

This was the first show back with fans and it did not disappoint. The main event was one of the best NXT UK matches this year. Dragunov has already begun to carry the legacy of the NXT UK Championship with great pride. The opening match showed that Davenport could be NXT UK Women’s Champion tomorrow and Samuels v Webster was really entertaining for what it was.