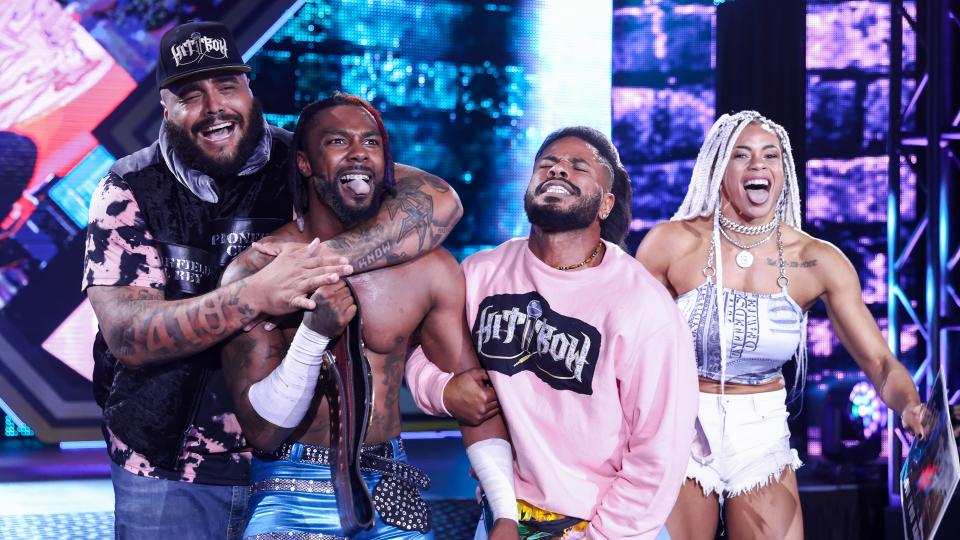 The Go Home show for the Great American Bash with NXT announcing some interesting segments for the show, as they attempt to continue building their stars to the top of the game. Last week Diamond Mine made their surprise debut, and this week we got to see them in their debut match.

GREAT: NXT started with a chaos triple threat tag team match between the team of Io Shirai & Zoey Stark, Ember Moon & Shotzi Blackheart, and Dakota Kai & Raquel Gonzalez. All women in this bout went all out by giving their best in this match. The highlight of this contest was when they were trading all of their finishers to each other. Io Shirai & Zoey Stark became the #1 Contender for the Women’s tag team titles after winning this match with a beautiful moonsault.

GREAT: Karrion Kross ventured to go out and face Johnny Gargano. Gargano stepped out and reminded out that Kross jumped him like a coward last week and beat Kross in his own game. Gargano stated Kross has now entered the ring that is the universe of Gargano. Gargano had not talented and brain laughed about Kross. Austin Theory attacked Karrion Kross from behind and there was a huge brawl between THE WAY & Kross before the security sent Kross to the back.

GOOD SQUASH: Diamond Mine was open next and their leader, Roderick Strong stepped into the ring to have his encore against Asher Hale. Strong showed off his new technical mastery that we have never seen before. Strong quickly made Hale tapped out to the Butterfly lock. Malcolm Bivens took the mike after the bout, saying,” Diamond Mine is open for business. This is just the beginning.”

GOOD SQUASH: Another squash match happened when Cameron Grimes took his revenge against Ari Sterling. I thought this match would be a decent 10 minutes match to make Sterling over, but nope. it was just another beat-up with Grimes winning with the Cave In.

GOOD: Following the game, LA Knight made his arrival and stated that no one cares if Grimes wins. Grimes, according to Knight, is a natural-born loser. Knight stinks, Grimes agreed. Next week, Grimes will go vs Knight for the Million Dollar Championship. Knight repeated his “Yeah” catch many times. Knight stated that he has recognized that one piece of the puzzle is missing for him. Knight referred to the audience as incels. Knight stated that he will put the title on the line next week, but if Grimes loses, Grimes will be forced to become Knight’s butler. Grimes said yes.

MUST WATCH: Adam Cole & Kyle O’Reilly then had an awesome promo against each other before their second bout in NXT next week at Great American Bash. Samoa Joe and the security officers entered to the sound of Joe’s music. Joe came up to Cole and said that he was there to avoid a fight. Cole said that Kyle O’Reilly is nothing without Adam Cole even he’s winning a lot of his matches, even Cole mocked O’Reilly’s wife. KOR then tripped Cole and put him in a heel hook. Cole tried to beg Joe to help him, but Joe walked away from Cole before the security separated both of them.

AVERAGE: Up next, Tian Sha had a mixed tag team contest against Jake Atlas & Mercedez Martinez. The match itself was decent overall with Tian Sha going over in this match. Xia Li gave a brutal black mass to Mercedez and knocked her out to win the match. The officials went down and checked on Martinez after the match ended.

GOOD: MSK and Ciampa & Thatcher then had an intense face-to-face before their tag team contest later next week at Great American Bash. Ciampa said that they’re Thatcher is hungry for the titles because he never holds them, so he wants to break The Underdogs Limb, which is MSK. MSK on the other hand acted like a heel slapping Ciampa to hype them up before their match. Ciampa said Carter got a free one tonight, but MSK ain’t gonna be so lucky next week. MSK posed with their titles in front of Thatcher and Ciampa.

GOOD: Austin Theory assaulted Karrion Kross and Scarlett as they walked to their car, but Kross struck him. Gargano lunged at Kross from behind, striking him several times before slamming his head against the vehicle door. Kross rose to his feet and used the Kross Jacket to knock Gargano out. Before Kross and Scarlett got into their car and drove away, Kross struck Theory from behind with his forearm. Samoa Joe was able to help Gargano get to his feet and back into the arena.

GREAT: It’s time for the main event!!!! The leader of Hit Row Records took on The Collosal, Bronson Reed for the NXT North American Title. The match itself was great overall with Scott actually tried using anything to keep Bronson Reed down. On the other side, the members of Hit Row were also trying to attack Reed but they can’t do it because of Reed’s athleticism. The result of this match surprised the crowds, because Isaiah “Swerve” Scott hit the 450 splash to win the NXT North American Title.

The go-home show for the Great American Bash was somewhat of a letdown when compared to Last Week’s show when it comes to the in ring action. However, it was the segments outside of the ring that really carried this show, especially the NXT title build that made THE WAY look like a big deal. The debut for Diamond Mine could’ve been better in my opinion with a promo that can introduced them to the NXT audience in a bit more detail.