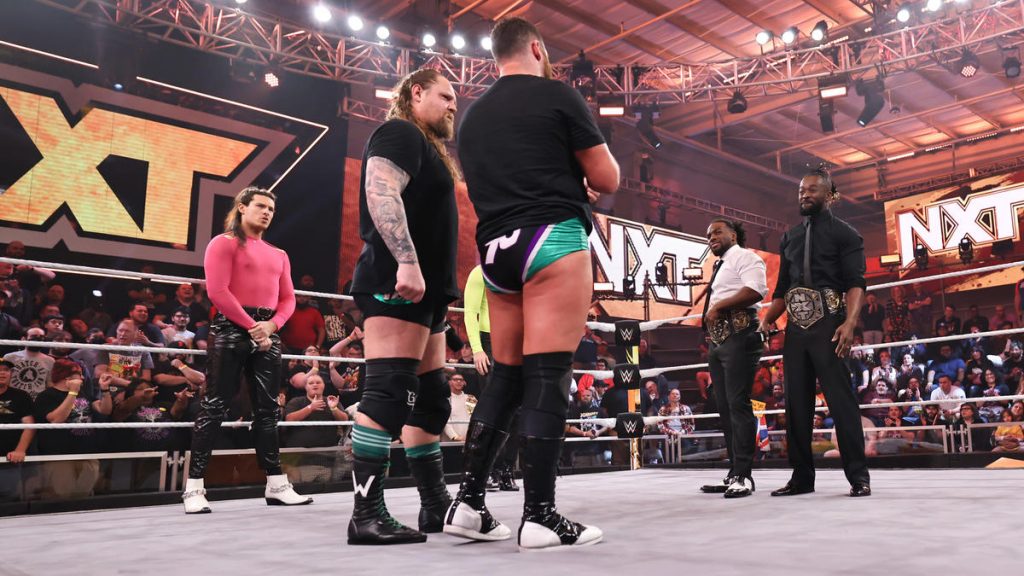 NXT continues to develop a large amount of stories with everything on the show advancing something. Tag team wrestling was a major feature of this episode with three tag team matches getting time. The crowd was hot as always and the show had a good structure. A solid episode of NXT that fits the episodic nature of weekly television.

A week removed from New Year’s Evil with the road to Vengeance Day kicking off, we hear from Bron Breakker and Grayson Waller. Apollo Crews and Axiom plan to combat Carmelo Hayes and Trick Williams’ antics in a tag match. Gallus collide with the team they replaced in last weeks’ gauntlet. And Toxic Attraction speaks after their battle royal victory.

Solid opener, but nothing that innovative. The story being told within the match was good. The crowd was into the match and fundamentally the match was delivered well. Good enough opener.

Results: Apollo Crews by Pinfall via Wheelbarrow Roll Up Reversal.

Tony D’Angelo tells Stacks’ it is time for him to become the underboss.

Tiffany Stratton says she has to show the locker room that there is only one superstar and that is her.

After talking about continuing to be a team in NXT and being on the same page. Gigi claims the Toxic Revenge tour is still underway. Lyra comes out before claiming Toxic can’t beat Roxanne alone so they need each other. Gigi and Jacy attack Lyra before Roxanne Perez makes the save.

The match was short and Sol Ruca looked great. Isla Dawn continues to be a thorn in the side of Alba as she distracts her. Sol got the win with her awesome Sol Snatcher.

The tension is there between these teams from early in the fall of 2022. The match was a brawl, this was more intense and continued to tell the story of Brooks and Kiana. Gallus looked great, Brooks and Briggs looked great as well. Gallus getting the win was the right choice and they had to work together to beat Briggs while Brooks was getting medical assistance.

Results: Gallus by Pinfall via Powerslam and Enziguri combo.

SQUASH Thea Hail with Chase U Vs Valentina Feroz:

Short match. Elektra Lopez tries to get Feroz to use brass knuckles but she gives the ref the weapon. Thea gets a facebreaker.

This was a short match that had some decent stuff. The match further developed two stories though. Roxanne and the Toxic duo and the newly formed rivalry of Cora and Lyra. Nothing to complain about.

NXT continues to develop a large amount of stories with everything on the show advancing something. Tag team wrestling was a major feature of this episode with three tag team matches getting time. The crowd was hot as always and the show had a good structure. A solid episode of NXT that fits the episodic nature of weekly television.

Photo Credit: (Website) For inquiries about the rating criteria check out the article announcing the new system here: