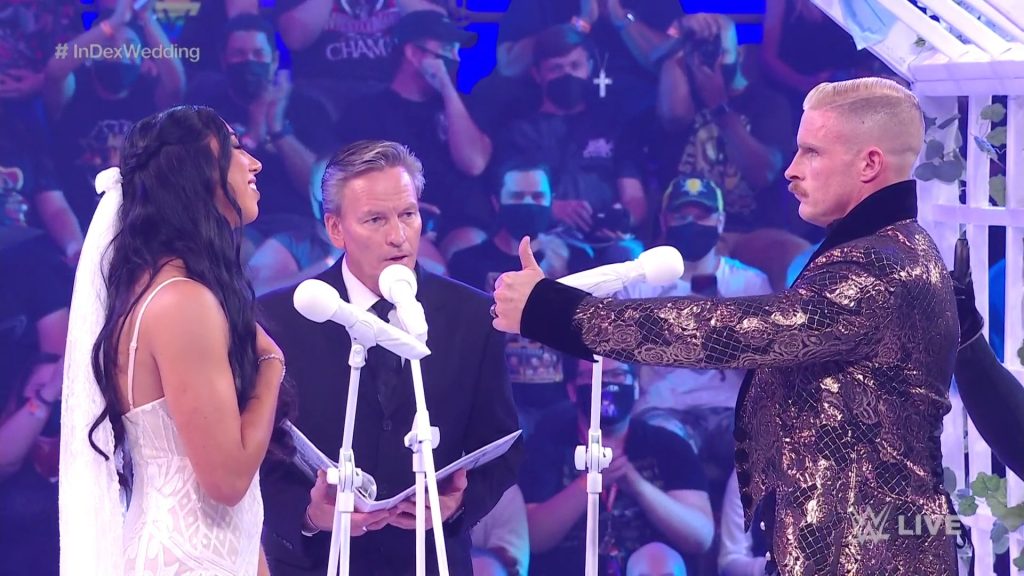 Last week saw the end of an era. The black and gold brand of NXT that we love and cherish within our hearts is officially gone. Tonight begins a new age of NXT, NXT 2.0. With Samoa Joe being forced to vacate his NXT championship due to injury and tonight’s fatal four way now for the vacant title, who walks out as the new champion? Who helps usher in this new era? Let’s find out!

GOOD: The show kicks off with a series of promos from the competitors in the fatal 4 way for the NXT championship. Tomasso Ciampa says that he is Mr. NXT and that tonight is Ciampa and Goldie 2.0. Pete Dunne says that it doesn’t matter how many men he has to go through, he will become the champion. Kyle O’ Reilly says that this is a dream of his 16 years in the making. LA Knight finishes by saying that he injured Joe’s manhood and that tonight he will become the new NXT champion. Bron Breakker, formally known as Bronson Rechsteiner, shows up and says that he wants to prove himself in the new NXT 2.0. Knight is offended at Bron interrupting him and says that before he wins the title, he’ll kick Breakker’s ass too. This was a good set of promos from all four men. Knight just oozes so much charisma.

AVERAGE: Up next we have LA Knight vs Bron Breakker. The match is mostly Knight beating down the rookie with Breakker getting the occasional offense in. He has a few nice suplexes, but oddly enough WINS the match clean with a gorilla press powerslam. This was an ok match but a very odd choice to have Breakker go over clean when Knight has a title match later tonight.

SATISFACTORY: Breakker is backstage being congratulated by several NXT talents, including Xyon Quinn. A short little segment that was ok.

AVERAGE: Up next is a tag match as Imperium takes on Josh Briggs and Brooks Jensen. The two have a brief promo before the match hyping up their debut and the impact they’re going to make in the tag division. This is another decent match. Jensen and Briggs look alright here but are very generic for the most part. The finish sees Bartel send Briggs into the steel steps. Jensen goes to the top rope for a move but is countered by Aichner who hits a beautiful double underhook suplex from the top rope to pick up the win.

AVERAGE SQUASH: Up next is BFab’s in ring debut as she takes on Katrina Cortez. This was a standard squash but BFab looked fine here for her first showing.

GOOD: Post match, BFab calls out Elektra Lopez and Legado del Fantasma. Lopez comes out and challenges BFab to a match, saying she doesn’t need a pipe to beat her. BFab accepts and says that she wants the match right now. The two teams continue to jaw jack until the screen fades into the next segment.

GOOD: Cameron Grimes, Odyssey Jones and Johnny Gargano are backstage and discuss preparations for the Index wedding. The guys are all dressed as Lumis which is hilarious. They hear a knock at the door and in comes Austin Theory! He’s been found! Theory says that he wouldn’t miss Indi’s wedding and says you can’t have a wedding without a Priest. In walks Damian Priest!! Gargano questions Priest’s credentials but turns his attention to Theory and they have a wholesome embrace. This was a fun segment.

GOOD: Up next we have the NXT Breakout tournament winner Carmelo Hayes. Hayes says that he’s still living off the rush of winning the tournament, but realizes he has a target on his back. He says that NXT 2.0 is a numbers game and says he needs backup. Hayes introduces his friend Trick Williams and says that wherever he goes, Trick goes with him. Trick says that Carmelo is the golden child of NXT, but questions why Carmelo is now humbling himself. The Carmelo he knew wasn’t humble and told him to be more open and confident. Carmelo says that he’s right and says he’s the chosen one of NXT. The two leave but Duke Hudson comes out and shoves Carmelo. Trick says this is what he’s talking about and that this Carmelo slander ends today. The two jump the ring and beat up Hudson, which is honestly kind of heelish. Could this be a potential way of turning Carmelo heel? I’m intrigued.

AVERAGE: Gigi Dolin and Jacy Jayne are backstage and talk to Mandy Rose who is sitting off camera. They talk about how since this is a new era of NXT, that means a new era of Mandy Rose. The camera pans to show Mandy with her back turned and a hood on so we can’t see her face. I like the tease of a potential new look for Mandy to make her fit in with the punk vibe of Dolin and Jayne.

POOR: Up next is Kacy Catanzaro and Kayden Carter vs Gigi Dolin and Jacy Jayne. During the match they show a clip of Kyle O’Reilly preparing in the dressing room as Pete Dunne shows up. The two get into it verbally as Ridge Holland shows up and he and Dunne beat down O’Reilly. The match ends pretty much immediately when Mandy Rose shows up to cause the DQ. Mandy is also sporting a new brunette look which looks good for her. Post match they beat down Kacy and Kayden until Saree makes the save.

GOOD: The main roster booking of NXT 2.0 begins as we get an impromptu six woman tag match as Kacy, Kayden and Saree take on Gigi, Jacy and Mandy. The heels maintain control of a majority of the match, isolating Catanzaro. This builds to a relatively decently fun match but eventually Mandy is able to get the upper hand and hit Kayden with a nice running pump knee to secure the win. Definitely one of the better matches on the show.

SATISFACTORY: Indi, Candice and the girls are backstage helping Indi prepare for the wedding. Cora Jade says Indi looks great and wishes to look that good at her wedding. Candice hilariously says that she should start by losing the beanie she’s wearing. This was a short segment but alright.

AVERAGE: William Regal is interviewed backstage about an announcement. He says that due to the attack earlier tonight, Kyle O’Reilly is not medically cleared to compete tonight. He names Kyle’s replacement to be…Von Wagner. The reason? Wagner saved Kyle from the beatdown at the hands of Dunne and Holland. I have no idea who this is but this is VERY confusing. What has this man done to warrant a title match. Breakker BEAT LA Knight earlier. Surely he’s more deserving. Oh well, hopefully he’s good.

AVERAGE: We have a video package for Tony D’Angelo. He talks about how he grew up on the mean streets of Chicago and that he left amateur wrestling and is going to beat people up in NXT because that’s where the real money is. This man screams WWF new generation gimmick. The over the top Italian mobster persona is going to be very interesting.

GOOD SQUASH: The Creed Brothers have a squash match against two local competitors. I really like the Creed Brothers. They have this fun intensity to them and their amateur background translated very well into the Diamond Mine gimmick.

GOOD: Post match, Malcolm Bivens puts over Diamond Mine and the newest addition to the team, a woman named Ivy Nile. Bivens has a really funny line where he says that she hasn’t had a carb since 2005 and welcomes her to the team. She looks really cool and I can’t wait for her to tear it up in the women’s division. KUSHIDA comes out to interrupt and says that the Diamond Mine talks too much and tells Roderick Strong that he’s ready for him. Bivens makes the match official and next week it’ll be KUSHIDA versus Roderick Strong for the cruiserweight title.

GREAT: Up next we have our NXT championship match as LA Knight takes on Tomasso Ciampa, Pete Dunne and Von Wagner. Wagner looked alright in this match and was a serviceable addition, but the crowd was NOT into him. Ciampa has a great spot where he hits a plancha to the outside and immediately runs over to look at Goldie. LA Knight is also busted open pretty badly at some point but I’m not sure what happened. Wagner gets a very close near fall after hitting Ciampa with an Olympic Slam. Ciampa and Dunne have a great back and forth after taking out Wagner with a double team elbow. Knight hits a very impressive superplex on Dunne, but Wagner comes in and hits a double underhook slam for another near fall. Ciampa, however, breaks it up and hits the fairytale ending for the win and becomes the new NXT champion. Goldie is back home after a great match.

MUST WATCH: Finally we have the long anticipated INDEX Wedding!!! They show a very nice promo package of the entire INDEX storyline up until this point so the anticipation is building. Johnny tries hijacking the wedding early on but holds back and asks Theory for the rings. Theory hilariously says that they’re already in a ring. They panic looking for the rings but Ikemen Jiro stands up and opens his coat to reveal that he has the rings. The priest asks if anyone objects to the wedding, to which several people raise their hands. Lumis responds by opening his coat to reveal an axe. Everyone slowly puts their hands down. Indi says her vows and Dexter gives his by simply giving a thumbs up. The priest questions why Lumis isn’t talking and Lumis locks the silence in on the priest, knocking him out. The crowd asks for Johnny to be the new priest but he instead wants Regal to do it. Regal says no as Beth Phoenix walks into the ring and reveals that, as of last night, she is officially an ordained priest. Beth says to cut to the chase, prompting Andre Chase to hilariously interject. Odyssey Jones, however, puts Chase in his place. They do the I dos, to which Dexter actually SPEAKS to a massive pop. The two kiss and are officially married. This segment was absolutely incredible. This was the perfect blend of comedy shenanigans and wholesome content, a great symbol for the INDEX storyline as a whole.

AVERAGE: the show ends with a brief backstage segment of Ciampa watching the ending of the INDEX wedding. Bron Breakker shows up and congratulates Ciampa on becoming the new NXT champion. Ciampa in turn congratulates Breakker on his impressive debut tonight. I smell a potential first feud for Ciampa as NXT champion.

So ends the first installment of NXT 2.0. This was a very mixed bag. The presentation is great and the crowd were into mostly everything. The fatal four way was easily the best match on the show and the INDEX wedding was absolutely incredible from start to finish. However, from an in ring standpoint, this was very subpar. The show had a lot of decent squash matches to put over new, homegrown talent, but I feel the show had way too many. This show felt really bloated, as if they tried packing two shows worth of content into one two hour time slot. The future seems promising for NXT 2.0, but this was not the best all around first outing.