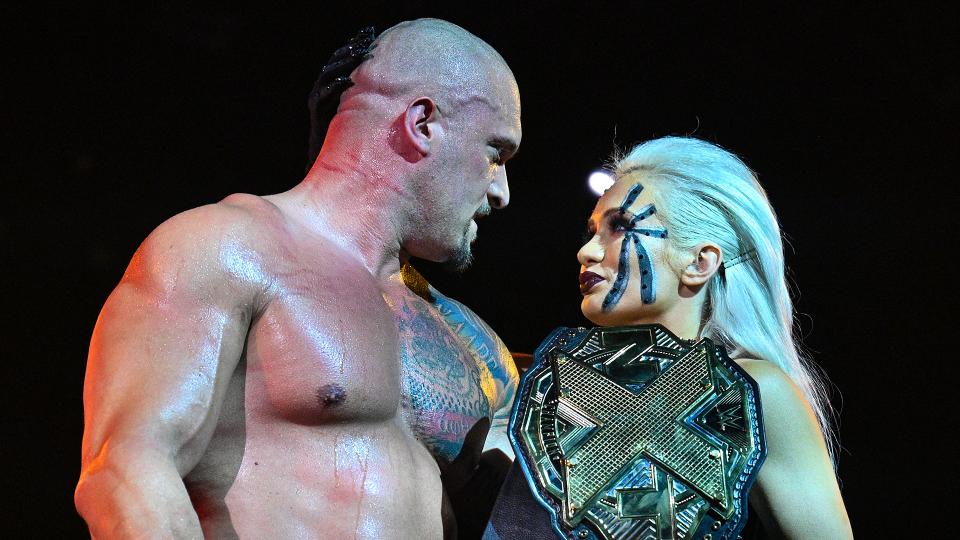 In a special NXT Title edition of NXT, we got a really stacked card with a couple of segments and matches that might be interesting to watch. Bobby Fish will make his in-ring return match by facing Pete Dunne. The Women’s Champion, Raquel Gonzalez, will team up with her friend, Dakota Kai. The NXT Title also going to be defended when Finn Balor takes on Karrion Kross.

GOOD: In the first match of the night, we got Raquel Gonzalez & Dakota Kai having their Mae Young Classic rematch against Ember Moon & Shotzi Blackheart. Both of these tag teams are having such a fast-paced tag team action. Raquel Gonzalez looked like a beast here by tossing her opponent all around the ring. However, Moon & Blackheart managed to pick up the win after pinning Dakota Kai.

GREAT: The returning Bobby Fish faced Pete Dunne next. This match overall was an awesome technical action with a mixture of different styles between Fish & Dunne. Fish looked really good here while Pete Dunne always looked dominant in all of his matches. Dunne delivered the “Bitter End” out of nowhere, for the win.

GOOD: Oney Lorcan attacked Bobby Fish’s arm after the match ended. Lorcan ripped the apron off and hooked Fish’s arm into the rope. They backed off after the officials prevented them to hurt Fish more, but Lorcan got through and kicked fish in the arm.

GOOD: Hit Row Records then had a backstage segment when they were talking about the championship golds in NXT. Swerve said that he can’t wait to cross Karrion Kross or Finn Balor off the hit list. Top Dolla said they have the Tag Titles in their sights, and Ashante said that Kushida’s time is up cause it’s Hit Row’s time to shine.

AVERAGE: Mercedez Martinez defeated Zayda Ramier in a really decent match. This match would’ve been better if they made it as a squash match, but i get that they want to show Zayda Ramier’s skills.

GOOD: After the match, the lights turned off and they turned back on with red lights and smoke surrounding the ring. Tian Sha appeared on the titanron. The lights then turned normal again with Martinez’s titanron turned back on, but Martinez was marked with a black x.

GREAT: It’s time for the Million Dollar Face-Off between Ted Dibiase and Cameron Grimes. Dibiase instantly interrupted Cameron Grimes in the middle of his promo. Grimes asked Dibiase about why he always embarrass him. Dibiase said the fact that the reason he put Grimes through all that is because he sees a bit of himself in Grimes. Dibiase said that Grimes lost his focus and he needs to regain it. LA Knight’s music hits and said that he’s a guy who does get the job done. Grimes & LA Knight then had a heated argument before Knight hit Grimes with his finisher. Ted Dibiase laughed and exit the ring with LA Knight.

GREAT SQUASH: Franky Monet then had her debut with an astonishing entrance and theme song. Franky faced Cora Jade in her debut match. she looked really impressive here by making her opponent bow down to her. Cora Jade gave a little offense to Franky but she managed to pick up the win after she delivered the Glam Slam to Cora Jade in front off Beth Phoenix.

GOOD: WALTER described ousting Alexander Wolfe from Imperium as Imperium purging weakness in a vignette that aired. WALTER released a promo in both English and German, urging Marcel Barthel and Fabian Aichner to improve their game. The ring is sacred, WALTER stated in German.

GOOD: “The Colossal” Bronson Reed made his entrance with his title. Reed said that it took 14 years to climb the mountain, but repeatedly falling and climbing up that same mountain. Reed said while he had a big mountain to climb, everyone else has a “Colossal” mountain to climb. Legado del Fantasma made their entrance. Santos Escobar joked that Reed;s speech was like a telenovela. Escobar said that the North American title is his and that he is about to claim it. MSK appeared and cleared Legado from the ring before he could jump Reed. While the Legado backed down the ramp, Reed and MSK stood tall.

MUST WATCH: It’s time for the gigantic main event when Karrion Kross defended his NXT Title against Finn Balor. This match started with the battle of strikes between both of the competitors. Balor looked aggressive in this match and was trying to dominate the match, but Kross always standing from all of Finn Balor’s attack. The counters and some big spots were amazing to see in here. The last 5 minutes of this match showed that Kross is the “Doomsday” and dominates Balor until the end. This match overall was amazing, and in my opinion, it was better than their first bout at Takeover Stand & Deliver. Kross made Balor sleep with the Kross Jacket to retained his NXT Title.

Overall, this week’s NXT show felt fresh with some new feuds and some interesting segments. There were a couple of positive and negative things in this show. First, the positive, The segments on this show were beautifully made and it showed more characters from their roster. Secondly, the problems of this show were the paced of this show. The booking of the matches sometimes felt like main roster. Also the one thing that i like was the squash match, it felt really good this time because there was only one squash matches and that one was really good.