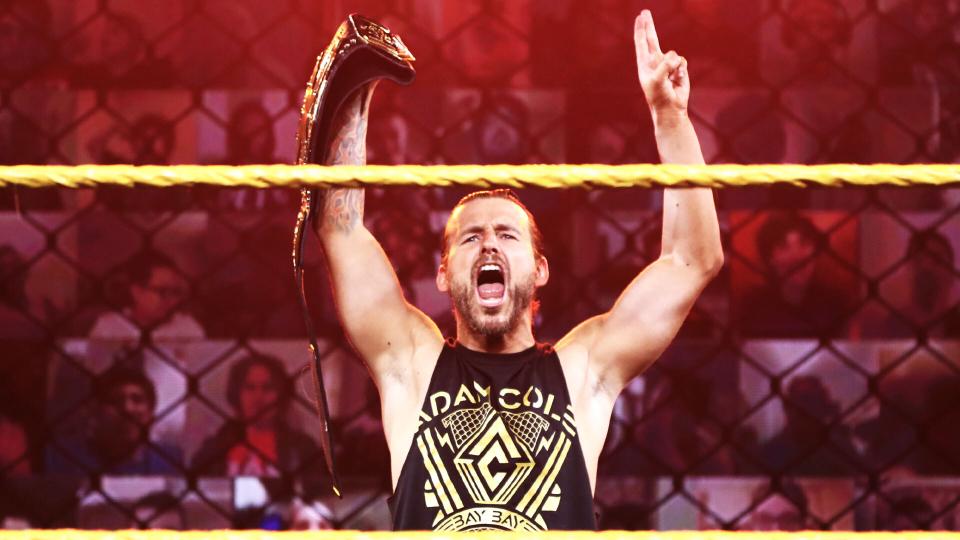 The last ride before NXT Takeover: In Your House. This week’s NXT featured some grudge matches with a chance being great. The Grammy nominated artist, Poppy, also will make her appearance to addressed about her music. Ted Dibiase will announce something priceless for Cameron Grimes & LA Knight. Finally, the 5 competitors of the main event at In Your House, will have a face off on the ring.

GOOD: Austin Theory started the show by having a match against Oney Lorcan. Those two athletes had some altercations last week after arguing about their master, Gargano & Dunne. This match showed how serious Austin Theory in the ring if Triple H really use him and not some goofy muscle man. Theory’s in ring ability was on point here, even Oney Lorcan was tired facing this serious Austin Theory. However, a brawl happened at ringside and it made Theory get distracted. Lorcan stole the chance and win the match after he delivered the Half Nelson Urinage.

GREAT: Santos Escobar calls out Bronson Reed as the Legado del Fantasma enters the ring. He claims he’ll make Reed pay for what he and Legado went through last week. Reed’s music begins to play, and he announces his title. Reed said he planned to tell Santos he’s full of it, but that it may have drained out when he was squished last week. Santos challenges him to return to the ring and do it all over again, and Reed accepts. When he enters the ring, MSK appears. Legado backs off, and Escobar argues he should have known they’d come out in a three-on-three match. He challenges them to a six-man tag match for the North American and Tag Team Championships, with the winner takes all match. Out come Hit Row Records and the stare off with Legado del Fantasma, MSK, and Bronson Reed before the commercial break.

GOOD: The leader of Hit Row, Isaiah “Swerve” Scott faced the big Killian Dain next. The match itself was great, with some cool spots from Swerve. Dain also had a great showing there by giving so many big moves. The problem of this match, again, are the distractions. Hit Row attacked Drake Maverick that made Killian Dain get distracted before Swerve finished him off with the Knockout Blow, for the win.

GOOD: Mercedez Martinez came out to the ring to face an unnamed local talent before Xia Li attacked her around the ring. Xia Li kept reminding Mercedes about what happened at Mae Young Classic.

GOOD: Poppy is welcomed to NXT by William Regal and Triple H, who praises her new music and the tunes she’s allowing them to utilize. When he asks when the CD will be released, she responds, “Right Now!” She presses a button on her phone, and her new album is instantly available for listening on all music outlets. Dexter Lumis offers her a sketch, which she hugs, only for Indi Hartwell to walk up behind her and scare out, fleeing. The looks on Triple H’s and Regal’s faces are priceless.

MUST WATCH: It’s time for the priceless announcement!!!! Ted Dibiase said that Grimes & LA Knight must climb the ladder of success to prove that both of them worthy of Million Dollar Man legacy as a golden ladder is lowered into the ring. Grimes and LA Knight then had a funny promo fight with Grimes going over because he said take the money and fame, because he’s taking the Million Dollar Legacy straight to the moon. Ted has them bring out the Million Dollar Championship in a protected briefcase since he doesn’t see what he’s supposed to be reaching for. As DiBiase chuckles, Knight and Grimes stare each other down and speak trash.

AVERAGE: Grizzled Young Veterans then faced the team of August Grey and Ikemen Jiro in a quick and a really fun tag match. August Grey & Ikemen Jiro are such an entertaining tag team on 205 live and i hope WWE will push him outside 205. GYV hit the Ticket To Mayhem outta nowhere, for the win.

GOOD: After the bout, Zack Gibson shouted at Tommaso Ciampa and Timothy Thatcher, telling them that they were done with them, but that a terrible odor lingered. They aim to take MSK down, but Ciampa and Thatcher are two thugs. They don’t understand it, according to Ciampa, and they won’t get a crack at the tag championship without going through them. Ciampa and Thatcher toss their chairs into the ring, and Gibson promises them a scrap if they want one. The Tornado Tag Team bout is next week. Ciampa thinks they should know three things: they enjoy tornadoes, they don’t need tags, and they don’t have to wait until next week. GYV runs out as they charge the ring. Thatcher says he’ll love shattering their limbs once more.

GOOD: Candice LeRae is presently making her entrance into the ring. She expressed her dissatisfaction with hearing about Poppy, prompting a Poppy chant. Poppy, she claimed, took over her interview last week and snatched Indi Hartwell’s boyfriend. Indi has just left the Capitol Wrestling Center in tears because to Poppy. Poppy is on her way! She comes to a halt on the ramp and declares that she does not wrestle but knows someone who does. It’s Io Shirai, Io rushes into the ring and knocks Candice out before hitting a flapjack. 619 against the ropes and a front dropkick off the springboard! Io celebrates with Poppy in the ring as LeRae exits the ring, and LeRae loses it heading up the ramp.

GOOD: Ember Moon then had a singles match against Dakota Kai before she face the Big Mami Cool, Raquel Gonzalez, at Takeover In Your House. The match went really well with a lot of brutal moves from Dakota Kai. Ember Moon also looked like an underdog here by flying everywhere. The sad thing was, this match ended with a DQ, which really ruined all of the match. Raquel Gonzalez attacked Ember Moon to end the match and protect Dakota Kai from the eclipse.

AVERAGE: Raquel is checking on Dakota Kai and Moon attacked after the contest. Raquel knocked Moon down and goes for the one-armed chokeslam, only to be blasted with a modified Eclipse! Moon is banished to the outdoors, where she hangs Raquel from the ropes, and another Eclipse occurs. Moon snatched the title and drapes it over a helpless Raquel before going away.

MUST WATCH: It’s time for the Fatal 5 Way face off!!!!! The segment started with an awesome battle of the mic between William Regal & Karrion Kross. Kross explained that he doesn’t run anything and that NXT has been out of control for a long time, therefore they’re in his domain. Kross declares that he will not leave the ring until all four of them have had their asses kicked. Kyle O’Reilly has gone out and stated that Adam Cole has plainly irritated him. Kross has thin skin, according to him, and he can tell he’s uneasy because it’s just a matter of time before someone comes down and steals the title. Gargano & Dunne also had a brief talk to Kross before their match at takeover. Cole appeared in the titanron and said that Kross is the biggest moron that NXT ever had. Cole doesn’t care who he beats at takeover, because at the end, Cole will be the NXT champ. Kyle O’Reilly then had a small promo before he slapped Kross really hard. All 4 people in the ring had a huge brawl that ended with Kross being the last man standing. Adam Cole then came out and superkicked Kross before he raised up Kross’s title to end the segment.

The go home show of NXT filled with a fun segment to progress the build of Takeover. However, in terms of in ring, it’s their weakest one forsure. NXT got the same problem as their latest NXT shows, which is Main Roster booking. All of the decent matches here ended with a distraction or a disqualification. They rushed their build for Takeover here in a good way, cause the segments ended up being really well.