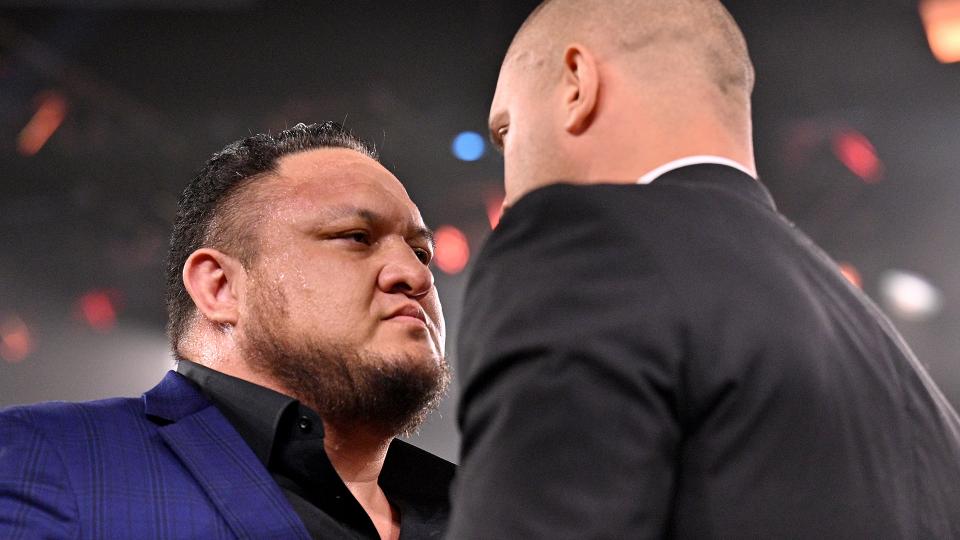 The Aftermath of NXT Takeover: In Your House is here and NXT already prepared with a stacked show!! First of all, In Your House was a good PPV with a really weak undercard but an awesome main event. However, William Regal said that he’s going to make a change in this show after the chaos. The build-up of Great American Bash starts now!

PERFECT: NXT started with an emotional promo by William Regal. He talked about how he’s been in NXT since the beginning but never capable of giving fans what they deserve anymore. Karrion Kross and Scarlett, on the other hand, cut his speech short. Kross said that he had foreseen this day. They had to come out to the ring to see it for themselves, and Regal’s tears were labeled “pathetic.” Samoa Joe’s music hits and everyone marked out!! Regal offered Joe to become NXT’s General Manager, but Joe declined that offer. Joe said he wants to make sure people respect Regal as he deserves. So Regal was okay with that. Regal doesn’t want Joe to become a competitor, so he can’t put his hands on talent…unless provoked. Joe instantly accepted that offer and tell Kross to get away from his ring.

AVERAGE: Next up is Breezango vs. Imperium, which is just a standard tag team match. This battle was extremely sluggish for the majority of the time since the fight was often interrupted by commercials. Both teams performed admirably as a tag team, but I believe the match might have been better if they had been given more time. Tyler Breeze won by pinning Fabian Aichner with a roll-up. Imperium assaulted Breezango after the match and draped Breeze in an Imperium flag.

GREAT: Backstage, William Regal and security officers were breaking up a confrontation between Kyle O’Reilly and Adam Cole. Regal stepped in between the two guys and informed them that they would be competing in bouts next week, with each guy choosing his own opponent. O’Reilly and Cole continued to brawl when the guards lost control. Samoa Joe arrived and attempted to pull Cole away from O’Reilly. Joe placed Adam Cole in the Coquina Clutch and forced him to pass out because he was provoked.

GREAT: Next up was the Kushida cruiserweight open challenge!!! Trey Baxter, a new up-and-comer, was up against him (Previously Blake Christian). Overall, this bout demonstrated Trey Baxter’s ring skill. He was swinging back and forth, attempting to restrain Kushida. The fight went off without a hitch and at a fantastic speed. Kushida used the hoverboard lock to finish the contest after destroying Trey Baxter’s arm. After that match, I can see Trey Baxter’s future in WWE will be very bright.

GOOD: Kyle O’Reilly jumped into the ring after the contest and challenged Kushida to a cruiserweight bout the next week. Kushida agreed to take up the task. This segment was a part of William Regal’s offer for O’Reilly to find an opponent.

MUST WATCH: As LA Knight made his entrance, Ted DiBiase waited in the ring.
At first, Knight was dead serious, declaring that winning the Million Dollar Championship was 100% worth it. Knight described it as the pinnacle of his wrestling career. As the audience screamed for Cameron Grimes, DiBiase placed the championship on Knight’s shoulders. Knight said DiBiase has taught him a lot, but it’s time to let go of what he doesn’t need. He then kicked DiBiase and threw the ring’s podium out. Cameron Grimes rushed down to make the save as he beats on DiBiase. Knight was able to escape.

GOOD: Raquel Gonzalez, the NXT Women’s Champion, and her partner Dakota Kai were up next, and they were up against Kacy Catanzaro and Kayden Carter. With the way the match played, it seemed like a takeover worthy contest. By providing the women’s champion so much offensive, Team KC demonstrated that their chemistry is on point. Raquel Gonzalez, on the other hand, put on a fantastic performance, smashing both Team KC members, and the match finished with Dakota Kai hitting Catanzaro with the Go-to-Kick for the victory.

GOOD: Io Shirai declared her return to NXT and went on to reveal who she wants to face next until Candice LeRae stopped her off. Indi Hartwell caught Shirai off guard and pounded her down for a few seconds while LeRae was speaking. LeRae instructed Hartwell to attack Shirai with the Elbow Drop through the announce table when she cleared the announce table. Zoey Starks run out to made the save, with Stark & Shirai clearing the ring.

MUST WATCH: It’s time for the main event!!! The Grizzled Young Veterans and Ciampa & Thatcher combination put on a fantastic tornado tag bout. This match was BRUTALITY!!! as Rhea Ripley put it. With so many terrific battles recently, the NXT tag team division is on fire right now. This match was loaded with hard-hitting and really slick technical stuff from both teams from start to end. The fight culminated in an unusual submission when Ciampa and Thatcher trapped James Drake in an Ankle Lock and Fujiwara armbar for the victory.

What a fantastic NXT episode! Even Samoa Joe’s comeback summarises how I feel about this show: it’s simply really, really fantastic. Trey Baxter had an outstanding debut on this episode. I can’t think of anything major wrong with this episode because it didn’t have the same trash conclusion and main roster bookings as last week. Overall, Takeover’s aftermath began wonderfully with a Must-Watch main event!