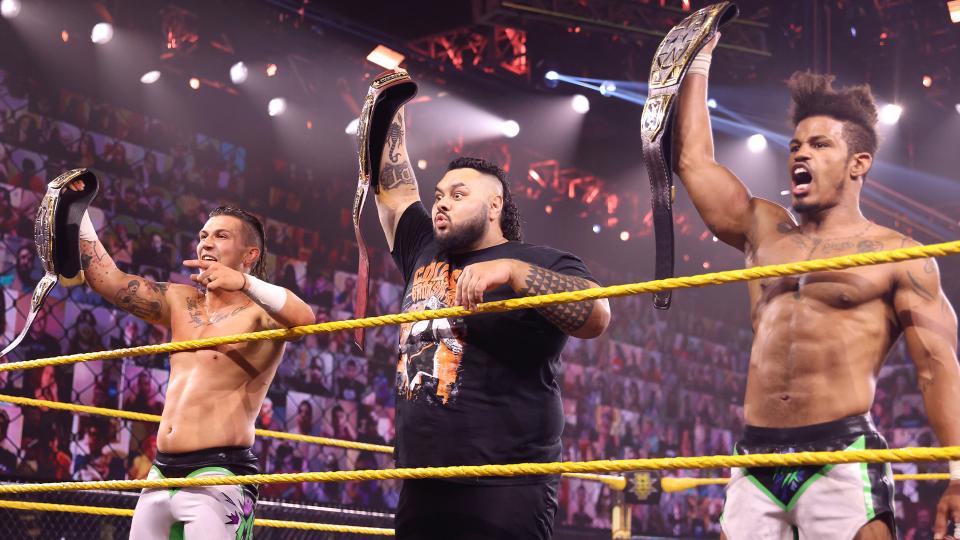 This week’s NXT was rumored to have big things in it. Top Talent was expected to return to this show too. This show featured a triple threat between Kyle O’Reilly, Pete Dunne, and Johnny Gargano to determine the #1 contender for the NXT Title. MSK also going to defend their titles against Legado del Fantasma. Another title match is advertised with Kushida defending his Cruiserweight title in an open challenge.

GREAT: We open the show with a triple threat between O’Reilly, Dunne & Gargano with the winners is going to face Karrion Kross at Takeover In Your House. This match overall was awesome with a really unique variation of 2 for 1 spot in this bout. The action was going really well until Adam Cole returned to NXT by attacking all three competitors and the referee. William Regal & The Officials came out to separate Cole from the superstars in the ring before Cole superkicked Kyle O’Reilly. The match ended with a no-contest and the booking started to feel like Main Roster.

GOOD: Drake Maverick was being interviewed by an unknown interviewer about his assistance to Indi Hartwell last week. Ever-Rise arrived to confront Maverick and display merchandise. The Hit Row crew arrived in their SUV, ready to verbally humiliate everyone. When things between Isaiah Scott and Drake Maverick began to heat up, Killian Dain got in the way. Isaiah Scott warned Dain to keep an eye on his tiny buddy or they’d both end up on Hit Row’s hit list.

AVERAGE: Up next we have LA Knight vs Jake Atlas. LA Knight wants to prove to Cameron Grimes why he’s better than Grimes. This match went really well with LA Knight dominating the match with his moves. Grimes & Dibiase were watching Knight while he’s fighting Jake Atlas. Atlas gave an upset win to LA Knight after Knight get distracted by Grimes. Atlas gave the cartwheel DDT, for the win.

MUST WATCH: Adam Cole appeared in the ring and announced that he won NXT Champion two years ago today. And, whether NXT or William Regal like it or not, he’s the top contender. He claims he’s been gone for two months, during which time he’s seen everyone try and fail to live up to his legacy. People think Kross is a monster, but he sees straight through him, calling him an overrated musclehead who doesn’t belong in the ring with him. This pulls Kross and Scarlett to the surface. Kross grabs a microphone and addresses Cole as “Little Man.” He claims that his motivations for tonight’s match were reasonable; he wants to be the NXT Champion. But it isn’t his, and no matter what he tries, it won’t make a difference. Cole was no longer exceptional, according to Kross, when he joined NXT. Regal came out and said Cole’s attempts to get a title shot aren’t going to work, but Kross tells him to shut up. He says he wants EVERYONE in the match at Takeover. Kyle O’Reilly, Johnny Gargano, Pete Dunne, and “this gas station weasel” Adam Cole.

GOOD: Up next, we got Carmello Hayes who previously named Christian Cassanova finally making his debut against KUSHIDA for the Cruiserweight title. This match really showed how good Hayes in the ring. However, KUSHIDA’s agility and technical ability really carried the match. Kushida retained his Cruiserweight Title by making Hayes tapped out to the Hoverboard Lock.

GOOD SQUASH: THE WAY(Candice Lerae & Indi Hartwell) were having a non-title match against the two upcoming talents, Zoey Stark & Zayda Ramier. This match was clearly a squash with The Way looked really strong in this match. Stark & Ramier also doesn’t look that bad either by giving a couple of offense to the women’s tag champs. Candice LeRae hit Ramier with the Wicked Stepsister and Hartwell hit Ramier with the Pretty Savage, for the win.

GREAT: In the main event of the evening, we have The NXT Tag Team Titles on the line when MSK defended their titles against Legado del Fantasma. This match started with a really slow technical techniques by both teams. GYV came out in the middle of the match but Ciampa & Thatcher were behind them and both teams were having a brawl while the tag team bout is still on. The match then continued with a fast paced tag team action with an awesome near falls, when Legado gave their finisher to Wes Lee but Nash Carter broke the count outta nowhere. This is the match that ended with a distraction too when Bronson Reed freshly squeezed Santos Escobar to distract Legado del Fantasma. MSK hit Joaquin Wilde with their finisher, for the win.

This week’s NXT was their weirdest episode for sure. They got many great matches and an amazing debut from Carmello Hayes, but the problem with this episode is their bookings. Two weeks in a row that I felt main roster booking in NXT. The opening match was a no disqualification match but it ended with a no contest, and then a couple of the main matches were ended by distractions. Thankfully, the build-up for In Your House is good so far and not destroyed by the bookings.