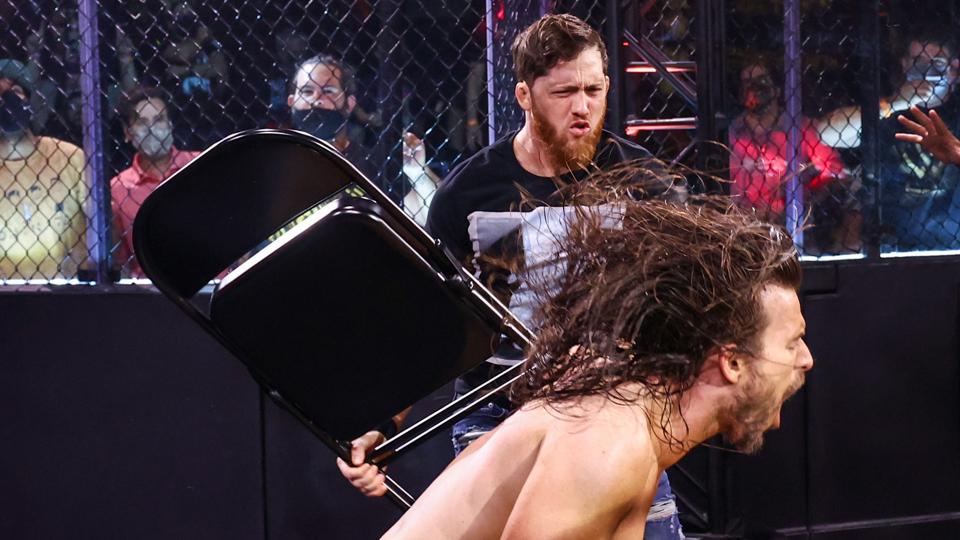 After having a downfall from last week‘s episode, NXT tried to raise their standard tonight by having some highly-anticipated matches. NXT continued to build up NXT Takeover 36 by having some segments announced too. Are we going to have a really good show? or another bad show like last week?

GREAT: NXT started with a kind of dream match between the team of Ciampa & Thatcher vs Dunne & Lorcan. This match was anything you wanted the match to be, just a brutal tag team contest from top to bottom. Ciampa & Thatcher really have awesome chemistry right here. The match ended after the returning Ridge Holland attacked Thatcher. Dunne finished off Ciampa with the bitter end, for the win.

GOOD: After the match ended, Ridge Holland unleashed his inner beast and brutally attacked Ciampa & Thatcher, making the stable of Dunne & Lorcan stronger than ever.

MUST WATCH: Samoa Joe came to the ring with a menacing look trying to give some statements to the NXT Universe. Samoa Joe gave an awesome promo before he called out William Regal to the ring. Joe then gave a couple of contracts to Regal. Joe convinced Regal to sign the contract because Joe knew that Regal was mad after getting choked by Kross last week. Regal agreed to sign the contracts and Joe now resigned as a part of NXT Management, but William Regal signed the contract to bring Joe back to the NXT active roster. Samoa Joe vs Karrion Kross is also confirmed to be held at NXT Takeover 36.

GOOD: Up next, The First Round of the NXT breakout Tournament continues, when Carmelo Hayes took on Josh Briggs. The match itself was great overall and it might be the best out of the tournament so far. Both competitors showed why they deserve to be in NXT. Hayes won this match and advanced to the semifinals after giving Briggs the springboard leg drop.

MUST WATCH: Raquel Gonzalez & Dakota Kai were up next and they’re trying to find a good opponent for Raquel herself. Dakota Kai cut a good promo saying that Raquel Gonzalez is better than every woman right now in the world, including some big names in NXT like Charlotte Flair & Sasha Banks. Raquel then posed with her title in front of the crowd before Dakota Kai turned on her by kicking her face. Kai then carried Raquel’s title then left the building.

AVERAGE: Team KC then had a tag team match against the team of Robert Stone Brand (Taya Valkyrie & Jessi Kamea). The match itself was decent at its finest, but the one thing that ruined it was the distraction!!!!! Robert Stone interrupted Franky Monet and made her lose the match after getting pinned by Kacy Catanzaro. After the match ended, Franky Monet took Robert Stone to the locker room while being mad at him.

GOOD: Imperium took on Hit Row next, this match was a one-sided match and it was fully on Imperium’s side. Ashante Thee Adonis was also the MVP of this match after he showed off some of his cool movesets to the universe. This match ended after a distraction from Legado del Fantasma. Imperium picked up the win. Legado del Fantasma tried to attack Aj Francis more after the match ended, but Isaiah “Swerve” Scott made the save.

GOOD: It’s time for the main event of the evening, Adam Cole had to fight the Colossal Bronson Reed in a good main event. I thought this match will be that regular and amazing Adam Cole main event bouts, but nope. They didn’t have that much chemistry together, and the match kinda dragged off at the start but it picked up its pace in the middle. Adam Cole won that match after a brutal last shot to the back of the head.

GREAT: Kyle O’Reilly savagely assaulted Cole after the contest, beating him with numerous chair shots before ending him with a Suplex against the steel steps to bring the night to a close. That wasn’t very cool of Kyle O’Reilly, who is known as “Cool Kyle.”

I can say tonight that NXT was far better than last week. The storyline progression for NXT Takeover 36 was built perfectly so far. However, the matches in this show always ended in distraction finished and it kinda disturbed me as a casual NXT fan who just wants good wrestling. Overall, the segments beat their quality of matches more last night.