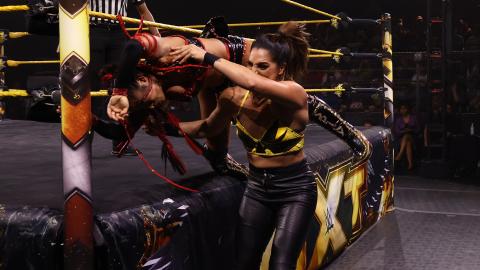 After a shocking outcome from NXT last week, The feud between two monsters in NXT will continue. This week’s episode featured a big title match and an act of revenge from the cruiserweight champion to Diamond Mine. This is also the start of the NXT Takeover 36 build-up. Let’s see how NXT does their show this week!!

GREAT: NXT started with Samoa Joe coming back after being choked by Karrion Kross last week. Samoa Joe was mad after what Kross did to him and had an awesome promo to call him out. William Regal came from backstage and tried to stop Joe that wants to attack someone. Samoa Joe said that he will wait for Kross until the end of the show.

GOOD: Up next, Bobby Fish & KUSHIDA will give their vengeance to the most dominant faction in NXT history right now, Diamond Mine. Both of them fought against Roderick Strong & Tyler Rust in an overall fun tag team match. This bout was all about technical wrestling from start to finish. KUSHIDA showed why he’s the champion among all champions right now by dominating the match. He also ended the match and crushed Diamond Mine’s winning streak with the hoverboard lock to Tyler Rust.

GOOD SQUASH: Franky Monet is back to shine in NXT when Robert Stone Brand accompanied her to the ring. Franky beat Jacy Jayne in a typical squash match. Mandy Rose was also at the ringside looking at Franky’s performance.

GREAT: The KOOLest person in the room, Kyle O’Reilly had a chance to fight the powerhouse of THE WAY, Austin Theory. This match showed off the aggressive side of Kyle O’Reilly that we have never seen before on NXT. This contest was also really good, with some unique offenses from Theory. with the antagonistic character that O’Reilly has right now, he can turn Austin Theory into a crybaby after making him tapped out to the heel hook.

BAD SQUASH: A million-dollar non-title match was next when LA Knight fought Drake Maverick. This match was basically made Knight looked like a really bad champion. Drake Maverick rolled him up in front of the NXT Universe in a really quick match. An upset win that Maverick didn’t need.

GOOD: After the match ended, Grimes orders Maverick to go after the battle, but Knight assaults Drake before he can leave. Grimes ultimately gains entry and dislodges Knight from Maverick. Knight then attempts to coerce Grimes into hitting Drake, which he grudgingly does.

AVERAGE: In the main event of the evening, Raquel Gonzalez defended her NXT Women’s Title against Xia Li. This match overall was just decent ruined by Xia Li’s injury. Xia Li dominated this match in a bad way because she sometimes botched all of her moves. In another way, Raquel did give a really good showing by giving some new moves. The match ended when Raquel delivered the One Arm Powerbomb to Xia Li

MUST WATCH: Samoa Joe came out to the ring being mad after he didn’t find Karrion Kross backstage. Samoa Joe then called Kross again and warned him. Kross then showed up in the titanron and he had a really good promo before he showed his camera to an injured William Regal. Samoa Joe was mad because of Kross. Joe then tried to chase Kross but he already drove with his vehicle

NXT once again failed to deliver big time with their episode this week. it felt really bland with the major problem was in the crowd. The matches were decent at their best and nowhere near a standout match like the usual NXT. However, the story in this match was built really well. Even though Kross was kinda buried last night on RAW, he still looked amazing in this episode after his segment with Joe.