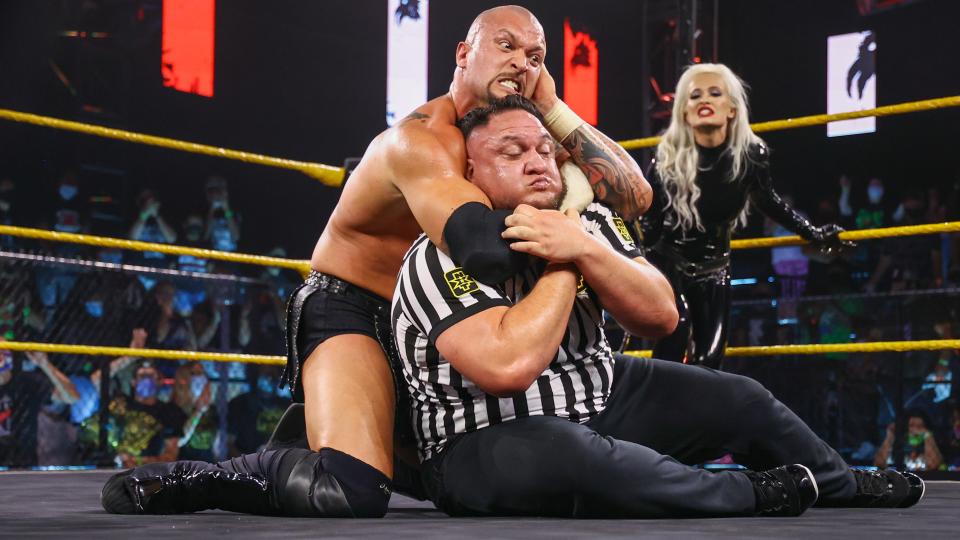 After an awesome NXT Great American Bash last week, NXT continues to walk into the level of the great show every week. This week’s show featured a highly anticipated return of the NXT Breakout Tournament with some fresh superstars and matches. The NXT Title will also on the line with our enforcer himself being the officials. Let’s find out how NXT goes!!

GREAT: NXT started with a rematch from a couple of weeks ago between Ember Moon & Dakota Kai. The match last time ended with a disqualification which was so freaking bad, but this time, both of the competitors paid that situation by giving a great match from start to the finish. Dakota Kai won the match with the Go To Kick.

BAD SQUASH: After an altercation backstage between two former Undisputed Era members, Roderick Strong ordered Tyler Rust to fight his former friend, Bobby Fish in a singles match. I expected this match to be a short 8 minutes of stiff wrestling, but it ended in a match that felt like the Main Roster one. Fish dominated the first second of the match, but Strong distracted him and made Rust kicked him out of nowhere. This match only lasted in under 3 minutes which was a bad booking from NXT and made Bobby Fish looked weak.

GOOD: After the match ended, Bobby Fish was about to get attacked by Diamond Mine, but The Cruiserweight Champion returned from their attack to help Bobby Fish. Fish & KUSHIDA then shook their hands before the segment ended.

GOOD SQUASH: Another squash happened in a strange way and it was a match between Sarray & Gigi Dollin. In the middle of a match, Mandy Rose showed up and look at the match between the two competitors. Sarray then gave some good offenses before she finished Gigi with a brutal exploder suplex.

GOOD: The leader of Legado Del Fantasma, Santos Escobar, then had to fight some scary obstacle when Dexter Lumis stood in front of his line. This contest was surprisingly good with some interesting character buildings for Dexter Lumis. Santos Escobar also didn’t look that weak against Lumis here. However, the rest of the members of Legado del Fantasma had to help their leader to have a win against the unorthodox one. Santos Escobar hit Lumis with the Phantom Driver, for the win.

GOOD: Legado del Fantasma celebrated their win on the ring while Hit Row made their entrance to interrupted them. Legado del Fantasma and Hit Row had a little altercation before they left the CWC. Meanwhile back into the ring, Indi Hartwell tried to carry Lumis but she ended up falling and both Indi & Dexter looked at each other.

GOOD: The first round and the first match of the returning NXT Breakout Tournament happened between Duke Hudson & Ikemen Jiro. This match was a mix of different styles into one. Ikemen Jiro showed off his athleticism here where he dominated the match by giving the big Duke Hudson some unique moves. This was overall a really good short match with Duke Hudson being the winner of this bout by delivering the Black Hole Slam to Ikemen.

RESULT – Duke Hudson advanced to the second round via pinfall.

GOOD SQUASH: Kacy Catanzaro & Kayden Carter then had a quick action when they fought Robert Stone Brand. This match was interesting to the women’s tag team division cause it can give them some more recognition. However, this felt like a match that was forced to be put into this episode because this show already had so many matches being advertised and they added this impromptu match. Kacy & Kayden won their match with their awesome tag finisher.

GREAT: After the match ended, Aliyah looked upset after her loss. Robert Stone tried to comfort her but ended up being attacked by Aliyah while the crowd was cheering for her. Aliyah blamed Stone for so many of her losses. she also gave a girl bye to Jessi Kamea and thanked the crowd before leaving. Franky Monet went out to the ring and lead Kamea & Stone to the back.

GOOD: Adam Cole made his entrance to the ring with a happy face after beating Kyle O’Reilly last week. Cole gave his statement that he proved himself that he still the best in the world. Cole also roasted the hell out of Kyle’s interview earlier on NXT and it was a great shot to extend the feud. Cole also said that Samoa Joe is just an overpaid security with a suit and Cole doesn’t scared of him. Bronson Reed then came out after being answering Cole’s challenge and gave a really good promo. Adam Cole was about to superkick Reed by he ended up getting squashed by him. Samoa Joe then showed up and had eye contact with Cole.

MUST WATCH: In the main event of the evening, we got the highly anticipated NXT Title match between Karrion Kross & Johnny Gargano. This match overall was great with some fast pace actions by Gargano. This match didn’t feel like a Karrion Kross match that mostly technical in the first place. both Kross & Gargano looked like a beast here with so many near falls. Samoa Joe was also an amazing guest referee here. Kross won the match by giving a brutal combo of destruction and ended it with a forearm to retained his NXT Title.

MUST WATCH: Samoa Joe raised Karrion Kross’s arm after his epic bout with Gargano. Before Samoa Joe leaves the ring, Karrion Kross choked him with the Kross Jacket. Samoa Joe can’t even move from Kross’s submission. The crowd also started to leave the ring and booed Kross. Kross stood up happily after giving Joe a quick submission. This was an awesome moment to end the show.

One word to say about this week’s NXT is “Overbooked”. This show was overbooked with some matches that needed time to make it good. NXT tried to put all of the new storylines they have right now in one episode, and in my opinion, it didn’t work. The positive of this show was, of course, Kross’s domination with the NXT Title. He went all out by choking Joe last night.