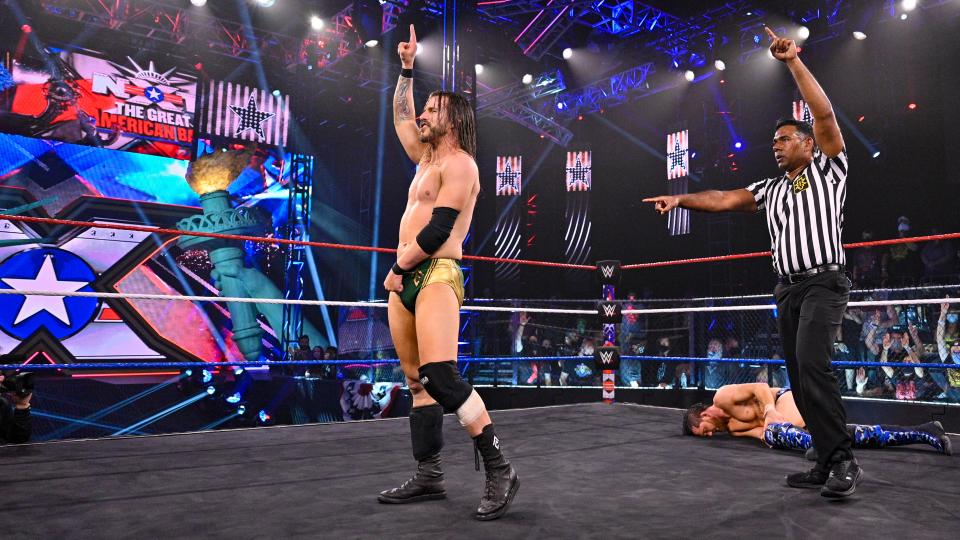 What a time to celebrate the 4th of July!!! NXT comes back with Great American Bash. This is the second time NXT makes this special happen except that we only have one night of Great American Bash this year. This show featured 3 championship contests and one gigantic rivalry that will continue in a singles match. Are they going to make this show a massive up? or a massive down? let’s see how it goes!!

MUST WATCH: This show started with an anticipated banger of a match between MSK and the team of Ciampa & Thatcher. MSK showed a different type of match fighting Ciampa here with more brutal offenses and a mix of high flying ability. Ciampa & Thatcher also had a lot of miscommunications here making the chemistry of MSK easily took them down. Wes Lee pinned Thatcher with the inside cradle, for the win.

GREAT: Karrion Kross & Johnny Gargano then had an awesome faceoff between each other. Kross also had a goal of his life: never lose the NXT Title, main event Wrestlemania, and win the WWE Championship. Johnny Gargano also destroyed Karrion Kross in the mic by giving him some facts and fire promos. William Regal then announced that Gargano will fight Karrion Kross for the NXT Title next week with Samoa Joe as the special guest referee.

MUST WATCH: a money match was next when Cameron Grimes tried to protect his standard against the Million Dollar Champion, LA Knight. This match was surprisingly solid from the start to the end. This was the match that really needs crowd reaction because they were really loud when this bout happened. Grimes & Knight had really great chemistry together. LA Knight’s heel tactic also really worked out well here when he delivered the DDT to Grimes outside the ring. Grimes also gave one of the best 10 counts break in this match by almost getting counted out. Unfortunately, Grimes’s standard was stolen by Knight after he defeated Grimes with the BFT.

GOOD: THE WAY defended their NXT Women’s Tag Titles against Io Shirai & Zoey Stark next. The match itself was pretty good overall. the pace of this match was kinda different than their kind of match because this was very slow with some good spots. The surprise of this match was when Tegan Nox came back to NXT and made Candice Lerae distracted. Zoey Stark hit her finisher to Indi Hartwell to win the NXT Women’s Tag Titles with Io Shirai.

MUST WATCH: Hit Row then had an awesome championship cipher when all of the members of Hit Row had some cool bars to the NXT Universe. Isaiah “Swerve” Scott has a lit North American Title reign so far with this cipher being played. After the cipher, Hit Row spits some more bars when they sang their song live. This cipher made me love Hit Row even more!!!

MUST WATCH: In the main event of the evening, we got the rivalry that’s on fire right now when Adam Cole fought Kyle O’Reilly in the singles matchup. This match started really slow when both of the competitors showed off their technical ability against each other. The pace of this match also went really well because they structured it really good that I didn’t keep my eyes off my TV. This match also had a couple of false finishes here that made it better. Adam Cole won the match after a second “Last Shot” following the “Panama Sunrise”.

Great American Bash was a great show overall from top to the bottom. I can say that this Special is better than NXT Takeover In Your House with how much better In Ring and the story in this show. The segments of this show also made the show better with how unique and well-structured those promos were. I also gave so much appreciation for the crowd that finally felt alive right now rather than the crowd in recent weeks.