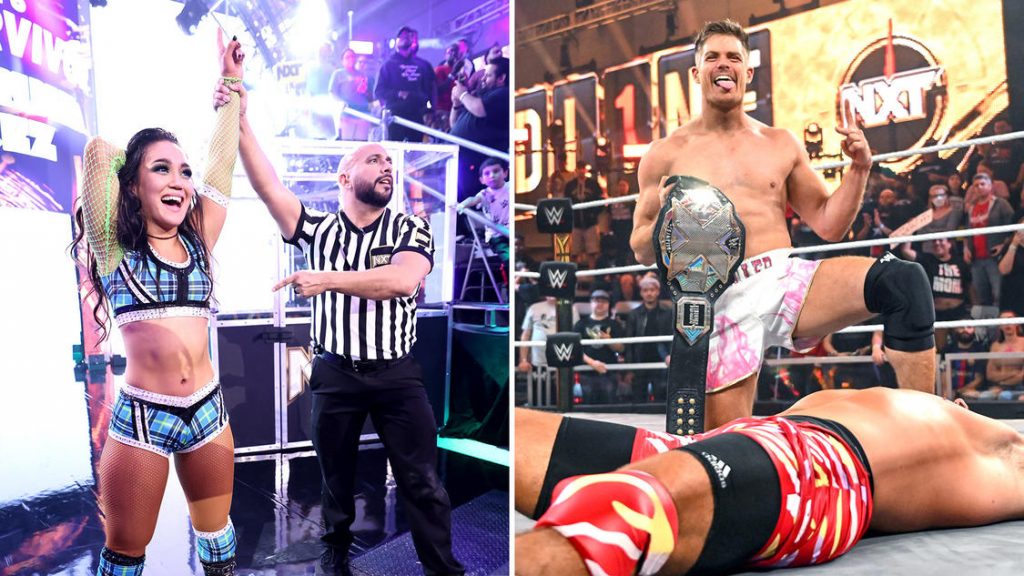 The men's Iron Survivor Challenge blew expectations out of the water and should have been the main event. Apollo and Bron was underwhelming for a main event. Without production issues and more storylines progressed with Grayson attacking. Cora and Roxanne teasing something with Cora just barely losing. New Day winning the belts. Isla being powerful. JD and Axiom has to be a future match based on the events of this match. This show was better based on the storytelling and production aspect than ROH Final battle, while having a better organized show aside from the semi and main event. Oh Yeah, Grayson Waller did a Shoey!!!

NXT’s final premium live event lies in this year’s Deadline. With the debuting combination of an Iron Man and a Championship Scramble like match. The Iron Survivor Challenge looks to crown number one contenders for the NXT and the NXT Women’s championship. New Day look to make it a triple crown as they challenge Pretty Deadly. Alba Fyre gets her revenge on Isla Dawn. And Apollo Crews looks to take control of his destiny against Bron Breakker.

Roxanne Perez entered the match first after the rules were explained once again. Zoey Stark enters second sporting black and white. The crowd start the match chanting for Roxy as they lock up. Roxanne has a deep headlock in Zoey as she struggles to break it. Both women trade roll ups and arm drags as the time is ticking. Roxanne has an armbar on Zoey as the third competitor enters. Kiana James arrives as she is able to work on both Zoey and Roxanne. Roxanne gets a nearfall as she stays in control of Zoey. Stark slides out of the ring and dropkicks Perez as she further works on Roxanne with the steps.

James throws Zoey into the ring post as she can solely work on Roxanne in the ring. Stark gets the first fall and the lead on Roxanne as Perez was distracted, working on Kiana. Cora Jade mocks Perez that is located in the penalty box as she tries to clean up the scraps of Kiana and Zoey. Jade attempts to hit the double underhook ddt but Perez is able to rush into the ring and stop her. Perez is able to stay in control of Kames and Stark as Kiana breaks up Roxanne’s pinfall attempt. Jade stops the PopRox stealing a roll up on Kiana. Cora Jade breaks up Zoey’s crossface with an indian death lock.

Roxanne gets a headscissors on Cora before James is released from the penalty box. Stark and Roxanne break up Kiana’s pinfall attempt before Indi makes her entrance. All women are in the match, so 10 more minutes under Iron Woman rules. Indi makes an immediate impact getting a fall after a big boot to Perez. Indi, Cora and Zoey are tied. Kiana catches Zoey with a lovely moonsault off of the barricade. Roxanne and Kiana fight to get back into the ring. Perez gets a roll up on Stark to join the tie for first. All four women sans Stark go face to face in the ring. Indi and Cora, and Kiana and Roxanne go outside as they are brawling. Indi and Roxanne the fan favourites get back in the ring with Zoey getting freed.

Stark gets a roll on Roxanne, Cora and Kiana before Roxanne gets an explosive uppercut. Cora dives onto Indi, Roxanne and Kiana as Zoey prepares to get a big crossbody to all of the other women. Stark lands on her feet after a phoenix splash, Indi gets the clubbing forearm. Kiana hits the reverse slingblade, Roxanne gets a backstabber on Kiana, Cora gets pinned by Roxanne with a PopRox to take the lead. Kiana gets a beautiful Spanish fly to Stark as Cora is free’d. Cora tries to get the win but as she connects with the DDT, Roxanne rolls out of the ring to get the victory. Summary by Coby

“Kiana James was someone that people didn’t believe that she belonged but she looked really good in the match. The story with the falls was everyone being equal until the end with Roxanne. The stuff in the match was solid. ” – Coby Galenzoski

“This was a cool first run at a new gimmick match, and I’d say overall it delivered” – Clark Taylor

Isla Dawn makes her entrance followed by Alba Fyre, who is clearly the crowd favorite. Fyre takes control of the early action and uses her grappling but Dawn is totally game. She fights back and the momentum swings both ways in the early going. This match is being worked snug for sure. The referee starts leaking black fluid out of his mouth and it seems to be the work of Isla Dawn. Alba has multiple opportunities to win the match but with the referee distracted Fyre is able to complete the win with her version of the Final Cut.

“This was just two women fighting, with the story of the Ref spitting up black goo. There was a storytelling advantage that this match had to bring it up .25 of a star. ” – Coby Galenzoski

“Not my favorite match of the night, but not boring by any stretch, the ref spot was fun, no doubt.” – Clark Taylor

Clearly behind The New Day, the crowd serenade them with New Day Rocks. Kit Wilson and Xavier Woodsstart the match with the crowd going on about wanting the New Day and Side-Plates. Xavier takes control of Kit as Kofi gets the tag hitting a joint bulldog. Elton gets the tag but it is a dud because of Elton being in the ring. Kit takes control pulling Kingston’s hair. Kofi and Prince exchange in a battle of the twerk. The New Day are in control of Prince as Woods catches Kit with a dropkick. Prince stops Kofi from getting the dive as Pretty Deadly takes control. Kofi tries to fight back as Kit keeps stopping him. Kofi gets a DDT before getting the hot tag to Woods.

Woods and Prince collide with Xavier choosing the athletic advantage. Woods works on both Prince and WIlson getting a slingshot DDT for a nearfall. Elton and Xavier trade forearm shots as they end up catching each other on rope rebounds. Grabbing Woods by his pants, Pretty Deadly almost gets the victory with the slingshot codebreaker. All four members of the match engage in attempting an Eddie with the tag belt. WIlson gets a belt shot on Woods but Xavier gets the kick out. Kofi stops WIlson from getting the spoiled milk, hitting the trouble in paradise on the outside. After a jackknife nearfall, The New Day get the double foot stomp. Woods gets the pin on Elton as the New Day get the shocking victory! Kofi and Woods celebrate in the crowd.

“What I expected, a fun match with an unexpected result. Not much more you can ask for.” – Coby Galenzoski

“Gotta give the New Day their props ” – Clark Taylor

JD Mcdonough and Axiom start the match opposite each other and given the format each competitor will enter after 5 minutes and then the time limit will come into play later in the match. Carmelo Hayes is the second to enter the match, and things really heat up at this point. He picks up the first fall of the match, and then continues to go after JD Mcdonagh. Grayson Waller quickly gains two points after he joins the match and there is a really fun spot inside the penalty box. He is rolled up by Axiom on a pretty quick count and Waller heads to the penalty box.

Joe Gacy is the final entrant and he immediately picks up a fall of his own by submission on Axiom, who is destroyed inside the penalty box by both Mcdnagh and Waller. JD slams the door to the penalty box shut but Axiom escapes from the top and is right back in this match. Carmelo Hayes makes it a four way tie at 2 with about 5 minutes to go and the only guy yet to get on the board is JD Mcdonagh. Carmelo Hayes in the waning moments of the match nearly wins it but Grayson Waller takes advantage and he has the lead with only 30 seconds to go. The match ends with Waller stealing the victory, and this was a very fun match with an innovative concept.

“EDGE of my seat action!!! Waller winning was the right move as Melo Vs Bron will likely happen at Mania weekend. Outside of a dock for Psychology this match was a perfect match in my heart” – Coby Galenzoski

“This was electric, Axiom is one of the best bell to bell performers in the business and this was a setting where he was truly able to show his unique skill set even in a losing effort” – Clark Taylor

Breakker and Apollo start off with a staredown showing the respectful tension. They lock up to a stalemate. Engaging in a test of strength as they both counter each other’s attempt to take control. Bron and Apollo circle the ring as they are building up the match. They reverse each other’s waist locks and armdrag attempts. Crews gets a standing moonsault off of the apron to Breakker as he takes control of the match. Breakker gets a stalling suplex and standing moonsault on Apollo for a nearfall. Bron gets a diving swanton to the outside before being caught with a jumping knee from Crews. Apollo gets a zoom in to his face as he kicks up the aggression. Crews hits a Death valley driver and a trio of germans to Bron for two nearfalls.

Apollo kicks out of a jackknife cover before hitting a trifecta of powerbombs for a nearfall. Breakker kicks out of a frog splash as Apollo is getting frustrated. Bron moves out of the way countering the running corner splash. Getting his comeback with a shoulder block, catching spinebuster and a diving bulldog for a nearfall. Crews counter the military press with a DDT. After reversing a chokeslam and hitting his own, Breakker pulls down the straps. Apollo hits his own Military press powerslam with Breakker kicking out. They enter hockey fight mode with Apollo hitting a jumping enziguri and pump kick before getting caught with a spear. Bron gets the victory with a spear. As Bron is celebrating, Grayson gets the rolling stunner and stands tall with the championship.

“Weak main event, with the correct post show move. Apollo essentially dominating for the time he did was weird to me.” – Coby Galenzoski

“Bron broke him in half with a spear, and that was sweet” – Clark Taylor

The men’s Iron Survivor Challenge blew expectations out of the water and should have been the main event. Apollo and Bron was underwhelming for a main event. Without production issues and more storylines progressed with Grayson attacking. Cora and Roxanne teasing something with Cora just barely losing. New Day winning the belts. Isla being powerful. JD and Axiom has to be a future match based on the events of this match. This show was better based on the storytelling and production aspect than ROH Final battle, while having a better organized show aside from the semi and main event. Oh Yeah, Grayson Waller did a Shoey!!!