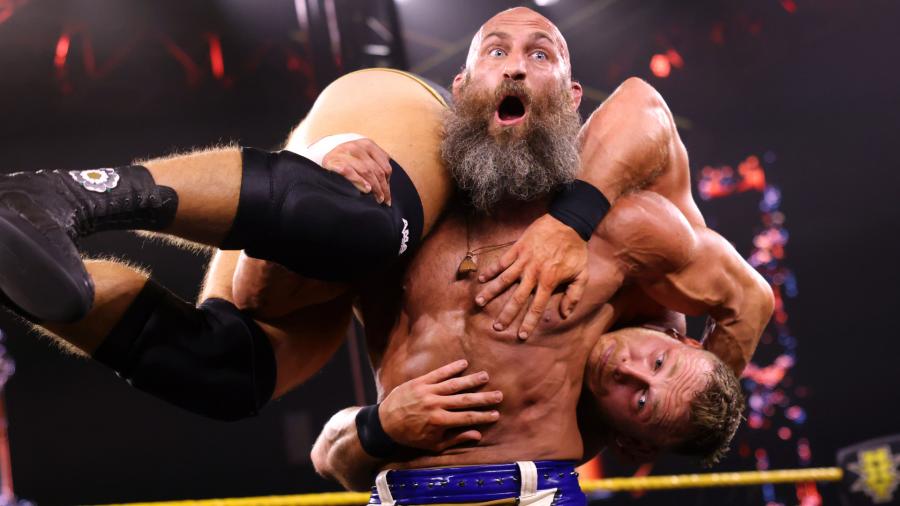 Welcome to this week’s review of NXT! This week looks promising compared to last week with matches like Johnny Gargano vs LA Knight and TommasoCiampa vs Ridge Holland, and more all lined up. Let’s get right into it.

AVERAGE: Starting off NXT we got Mandy Rose taking on Sarray. This match was nothing too memorable as the two women traded some offense off each other before Sarray kicked Mandy in the face. This caused Gigi Dollin and Jacy Jayne to take Mandy out of the ring, cover her face with a towel, and take her backstage. Thus causing Sarray to win via countout.

GREAT: Out came Ilja Dragunov to speak to the NXT crowd for the first time since dethroning Walter to win the NXT UK Championship. You can tell he’s still feeling the effects of the match, as he comes down to the ring limping on one leg, but the crowd is behind him all the way. Ilja says that he is a man who just fought the biggest battle of his life and he doesn’t fear anyone who challenges him. This was a great, short promo and its nice to see the NXT UK guys be over with the NXT crowd.

GOOD: Coming back from commerical, Imperium made their way to the ring. Grayson Walker and Drake Maverick was already in the ring, ready to go. Imperium had control until Drake Maverick got some offensive going and got fired up. Grayson Walker tagged himself in though, ending the momentum that Maverick had accumulated and losing the match for his team.

AVERAGE: The NXT Women’s Champion was in action up next, as Raquel Gonzalez took on Jessi Kamea. Kamea got some offense in, but in the end it was Raquel Gonzalez who picked up the quick and easy victory, with a powerbomb.

GREAT: We then got a promo from Samoa Joe who was interviewed by Wade Barrett. Samoa Joe said he would pave a path for the future of NXT and said he wanted nothing but the best to challenge him. While, yes, it was a short promo, Joe proved just why he is one of the best. I definitely recommend you watch this one on Youtube.

AVERAGE: Ikeman Jiro took on Roderick Strong in what was a quick match for the former Undisputed Era member. Ikeman had The Messiah of the Backbreaker reeling early on, but Strong fought back. Eventually hitting a couple of backbreakers for the win.

GOOD: Main event time as Tommaso Ciampa takes on rival, Ridge Holland. The two men trade blows and Tommaso gets the upperhand, Lorcan and Burch however distract Ciampa in order for Holland to gain control. The two went back and fourth a little while before eventual, Ciampa hit Willow’s Bell for the win.

GOOD: After the match, Pete Dunne, Danny Burch, and Oney Lorcan all attacked Tommaso Ciampa. MSK (Nash Carter and Wes Lee) then came out to aid Ciampa. Earlier in the night before the main event, William Regal made MSK vs Burch and Lorcan official for next week. But they weren’t waiting till next week. The show ended with Ciampa and MSK standing tall over the heels.

NXT was really hit or miss this week. While not bad, it definitely wasn‘t episode of the year. Samoa Joe and Ilja Dragunov are definitely set for long reigns and are both believable champions, however it feels like NXT should focus a little more on MSK and Isiah “Swerve” Scott as they haven’t had a real title match in a few weeks. But next week, we will see the NXT Tag Team Championships contested, so hopefully from next week forward, NXT can build up some steam.