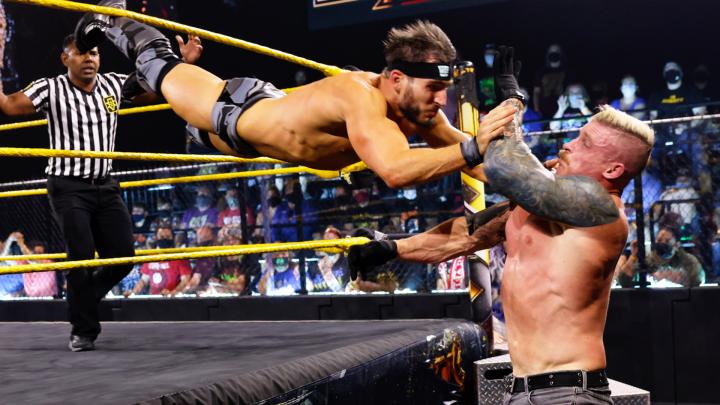 Ladies and gentlemen, welcome to another episode of NXT. The WWE’s yellow brand has a good show lined up, with tag team action, former friends squaring up, a “Love Her or Lose Her” match, and more! Without further delay, let’d get right into the show.

GOOD: We opened up the show with tag team action, as Ashante Thee Adonis and Top Dolla of Hit Row took on Raul Mendoza and Joaquin Wilde of Legado Del Fantasma. Hit Row attacked Legado Del Fantasma before the match. Once the ref got things settled, Top Dolla and Adonis takes control easily over Wilde and Mendoza, before Santos Escobar distracts the ref causing Adonis to be throw out of the ring by Wilde. The match ended soon afterwards as Escobar attacks Top Dolla with a chair resulting in a DQ finish.

GOOD: After the match, Legado Del Fantasma began to attack Isaiah “Swerve” Scott. They ripped his grill out of his mouth and before they could continue their assault, B Fab and Top Dolla got in the ring and took them down.

AVERAGE: Ridge Holland is back, and he’s ready to go. Holland took on Ikemen Jiro in what was a squash match to get the newly returned English Man over. The short match ended after Holland hit Jiro with a northern lights suplex, pinning him for the 3 count.

GREAT: Next on NXT we had former teammates go head-to-head as leader of the Diamond Mine, Roderick Strong took for former fellow Undisputed Era member, Bobby Fish. Fish took control early on, hitting Strong with a multitude of kicks and strikes, but Strong came back hitting Fish with a couple of backbreakers. Once Fish tried to start up a comeback, Strong found a way to take control, hit the End of Heartache, and win the match.

GOOD: More tag team action was up next as Grizzled Young Veterans took on LA Knight and his butler, Cameron Grimes. Grimes took control pretty early but was distracted by Knight causing GYV to take control. As Grimes went to tag in his partner, Knight jumped off the apron causing Grimes to work on his own and end up getting pinned, losing the match for his team. After the match, The Million Dollar Man Ted DiBiase comes out and tells Cameron Grimes he needs to find a way out of LA Knight’s deal.

MUST WATCH: Then we got a pretaped promo from Dakota Kai explaining her attack on Raquel Gonzalez last week. She said she refused to be the sidekick to the person she mentored. Kai explained that Gonzalez stole her spotlight and that Gonzalez should have saw this turn coming. This was easily one of, if not the best promo Dakota Kai has put on, and I absolutely cannot wait to see where this rivalry goes.

AVERAGE: Now onto the next chapter in the NXT Breakout Tournament as Joe Gacy took on Trey Baxter. Once again, the Breakout Tournament got the short end of the stick with this match being around 5-6 minutes. Baxter got the best of Gacy, winning the match after hitting an impression 450 stomp.

GREAT: At one point during the show, NXT General Manager William Regal told Samoa Joe that he had hired extra security to keep the Samoan Submission Machine and Karrion Kross separated. Well before the main event, the Man of Time, Famine, War, and Pestilence That You Can Not Endure came out and called out Samoa Joe. Big Joey Samoey came out and ran right through security, however Kross disappeared, leaving a security guard to pass out from a Coquina Clutch.

GREAT: In the main event we had a “Love Her or Lose Her” match between Johnny Gargano and Dexter Lumis. Gargano took control early on before Indi Hartwell ran out and told her fellow The Way partner to give Dexter a chance. Lumis eventually went for a springboard elbow and missed before Gargano took control and locked in the Gargano Escape. The match ended after Johnny Gargano hit One Final Beat to Dexter Lumis twice. Once outside the ring, once inside, before pinning Lumis for the win. Despite the stipulation, Indi Hartwell closed out the show by jumping in the ring, and making out with Lumis closing out the show.

This was definitely an upgrade from last week. Almost everything from top to bottom was awesome. It had a few hiccups here and there, but over it was a really enjoyable show and it gets me excited for next week and the upcoming NXT Takeover 36.