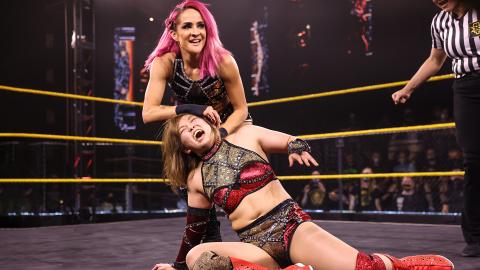 Of course I do want to start by saying that this is the first episode of NXT after WWE released 13 NXT Superstars last Friday night, and I just want to say thank you to those who were released, and I hope you find success else where. As we inch closer to NXT Takeover 36, things are getting more and more heated in NXT. The NXT Breakout Tourament continues, Adam Cole and Kyle O’Reilly come face-to-face, Ilja Dragunov makes his NXT (not UK) debut and much more is lined up for this week’s edition of NXT, so let’s get right into it.

GREAT: We open up NXT this week with women’s action as Sarray takes on Dakota Kai. These two were throwing everything they had at each other: suplexes, an assortment of kicks, submissions, and more. When it seemed like Dakota Kai had nothing left and couldn’t put away Sarray, she hit a big Scorpion Kick out of nowhere for the three count.

AVERAGE: After the match, Raquel Gonzalez came out, but Dakota Kai quickly fled the scene. Raquel grabbed a mic and told Dakota that she would never be on top nor will she ever win the NXT Women’s Championship.

GREAT: Then we got a recap of last week’s “Love Her or Lose Her” match. Despite the stipulation last week, Indi Hartwell decided that she was going to stay with Dexter Lumis, and this week they are going on their first date. We cut to The Way household where we see Indi getting ready for her date while Johnny Gargano and Candice LeRae sit in their kitchen and discuss how they’re going to make In-Dex work. Then Candice goes to talk to Indi as Johnny answers the door and comes face-to-face with Dexter Lumis. He let’s Dexter know that he better take Indi somewhere nice and have her home by 10 PM. As they leave, Johnny reveals to Candice that they can track the couple via Indi’s phone, and they follow In-Dex, fading to black. We’ll visit them again later in the night.

GOOD: Then we got a promo from Hit Row. Hit Row says they’ve let Legado Del Fantasma get away with too much. And that when Legado attacked Hit Row last week and ripped out Isaiah “Swerve” Scott’s grill, they disrespected Hit Row and their culture. Scott then whips out a Luchador mask and throws it into an oil drum, burning it.

GREAT: We finally cut back to the ring as Ilja Dragunov’s music hit and he came out. The #1 Contender for the NXT UK Championship said that he isn’t a man a big words. He said that at NXT Takeover 36, an unbeatable kingdom will fall, and he will be the new NXT UK Champion. He was then interrupted by Pete Dunne. Dunne comes out and tells Dragunov should be thanking Dunne, because Dunne paved the way for NXT UK and carrying the entire continent of Europe on his back. Ilja tells Dunne that he will beat WALTER, something Dunne was never able to do. Dunne tells Dragunov that he won’t even make it to Takeover after tonight. We learn later in the night, we learn William Regal had made Pete Dunne vs Ilja Dragunov official for the main event tonight.

AVERAGE: It was finally time for some more in-ring action as The Million Dollar Champion LA Knight took on Andre Chase. This was really just a squash match in order to get Knight over, as he hit BFT very early on and got the victory.

GOOD: After the match, “The Million Dollar Man” Ted DiBiase came out to confront LA Knight. He lays down the challenge for Knight to put his title on the line one more time against Cameron Grimes. Knight says no at first before proposing an idea. At Takeover 36, where if Grimes win he gets the Million Dollar Championship, but if Knight wins, then DiBiase becomes Knight’s butler instead of Grimes. Cameron Grimes is hesitant to agree at first, but after some reassurance from DiBiase, he agrees.

AVERAGE: More Women’s action as Gigi Dolin took on Amari Miller. Gigi won the match via pinfall. Not much to say here, as it was just another squash match.

GREAT: We went back to Indi and Dexter to see that they have successfully made it to the restaurant and are about to enjoy a appetizer when Indi over hears Johnny Gargano (codenamed Rebel Heart) contacting Candice LeRae (codenamed Poison Pixie) via a radio. Indi goes up to Candice and let’s her know the gig is up before returning to her date. Johnny Gargano then tried to deliver a cake for the couple while dressed like a waiter. He accidentally ended up caking Dexter in the face before storming off. Indi then leans in to kiss Dexter as she covers up the camera.

MUST WATCH: Coming back to the ring, it was time for Adam Cole and Kyle O’Reilly to go face-to-face. William Regal informed both men that their match at Takeover will be a 2 out of 3 falls match, and that both men gets to pick one stipulation and Regal gets to pick the 3rd. Kyle O’Reilly goes first and says that fall #1 will be a straight up, normal 1v1 wrestling match. Adam Cole then let’s everyone know, fall #2 will be a street fight. The two continue to go back and forth until eventually they start to brawl. Security keeps them apart and Regal announces that fall #3 will indeed be a steel cage match.

AVERAGE: The NXT Breakout Tournament continues as Odyssey Jones takes on Trey Baxter. The bigger man had control almost the entire match, but Baxter definitely didn’t look weak. He got some offense of his own in, before eventually losing thanks to a powerbomb from the hands of Odyssey Jones.

GOOD: Up next we got Boa taking Drake Maverick. Drake and Boa looked good in this in this match, and the crowd was actually surprisingly into it. As it seemed Drake had control, Mei Ying spits mist into his face, causing Boa to win the match with a roundhouse kick.

MUST WATCH: In the match event, Ilja Dragunov took on Pete Dunne. This was a technical wrestling masterpiece. There where submissions, chops, big kicks, suplexes, and so much more. Towards the end of the match, WALTER came out and distracted Dragunov, causing Pete Dunne to take control, hit the Bitter End, and win the match.

Outside the opening match and the main event, NXT wasn’t great in-ring this week. Nothing terrible, but it wasn’t anything great and amazing. Though, outside the ring, NXT was pretty decent. The Way was funny as usually, I’m super hyped for Kyle O’Reilly vs Adam Cole, and Hit Row looked badass. With Takeover less than 2 weeks away, what will NXT do next week on the go home show?