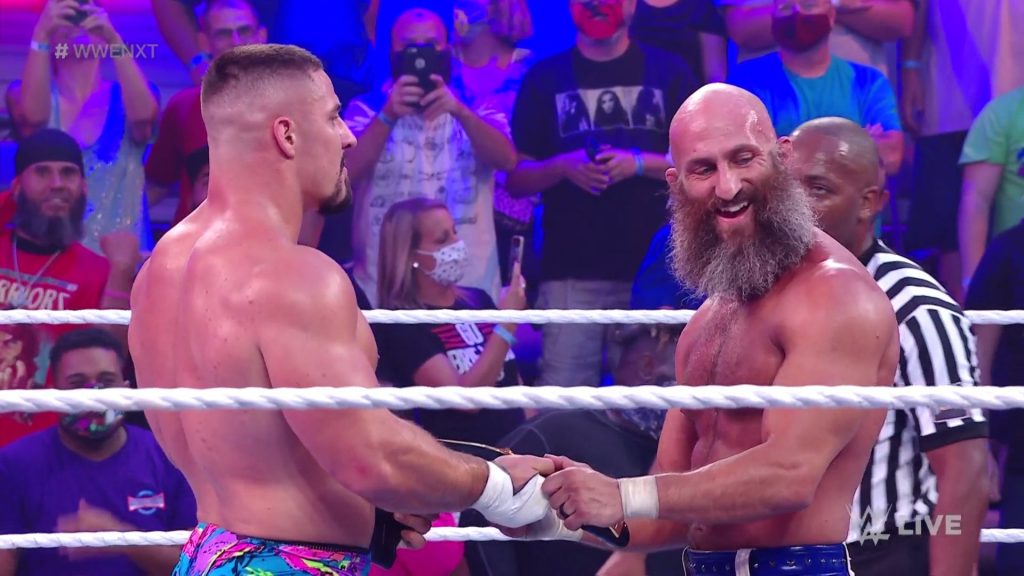 GREAT: NXT opened up with a bunch of the young and new talents that have been introduced recently & then Tomasso Ciampa came out. He started talking about how excited he is for the future of NXT & he stated that NXT is the A-show. He then kept hyping up NXT until Cameron Grimes music hit, who made it known he wanted a shot at the NXT Title. Pete Dunne then came out alongside Ridge Holland & he said that he didn’t see much in the ring from the young talent & then everyone started brawling. The final two left in the ring were Ciampa and Bron Breakker, as they cut to four women brawling backstage for reasons which were unknown. When the camera cut back to the in ring action, Ciampa and Breakker were fighting Dunne and Holland and came out on top.

GOOD: Roderick Strong defeated Kushida to win the Cruiserweight Championship after a pretty good match. Strong was able to get the victory after help from the Diamond Mine. This match was slightly disappointing, only because it did not get enough time to get to the next level.

AVERAGE SQUASH: Dante Chen defeated Trey Baxter in Chen’s debut. The match was just about a minute & Chen’s only move was the move he won with. This was alright.

GREAT: Andre Chase had a video package where he was talking to students at Andre Chase University. He started talking trash about Odyssey Jones & then one of his students, Steve, asked Chase if Jones beat him in the first round of the Breakout Tournament. Chase responded by getting very mad and dropping f bombs (that were bleeped out) & this came across great.

BAD: Joe Gacy was then in the ring next & everything he said didn’t correlate or make sense.

GOOD SQUASH: Cameron Grimes defeated Joe Gacy in an extended squash match that went a little too long, but was good.

GOOD: Legado Del Fantasma got in the ring after & Santos Escobar told Lopez that she completes the faction. Lopez said this was just the first taste of what she can do and what she will unleash on B-Fab. Lopez told B-Fab to get out there if she didn’t like that. Hit Row’s theme then hit & B-Fab & Lopez brawled for a bit before being pulled apart. This progressed the story well.

GOOD: After the match Andre Chase tried to hit Jones with a chair, but it did not work & Chase ran away quickly. This made Jones look awesome.

GOOD: Toxic Attraction came out next and Mandy Rose said that NXT needed a woman like her. Rose said the fans did nothing when her face was beaten. Rose said that Gigi Dolin & Jacey Jayne don’t care what people think and they are the future of the women’s division. Dolin said that they were chaos without a purpose but Rose brought them together to have a purpose. Jayne said that they want the NXT Women’s Tag Team Championships. This was a good promo.

This was a show dominated by squash matches, but that is understandable, as they are attempting to build up new stars. The opening match could used more time, but was entertaining none the less and the main event absolutely rocked as Breakker and Holland looked great. The introduction of so many characters can get a bit overwhelming, but again, it is understandable why they are doing this.