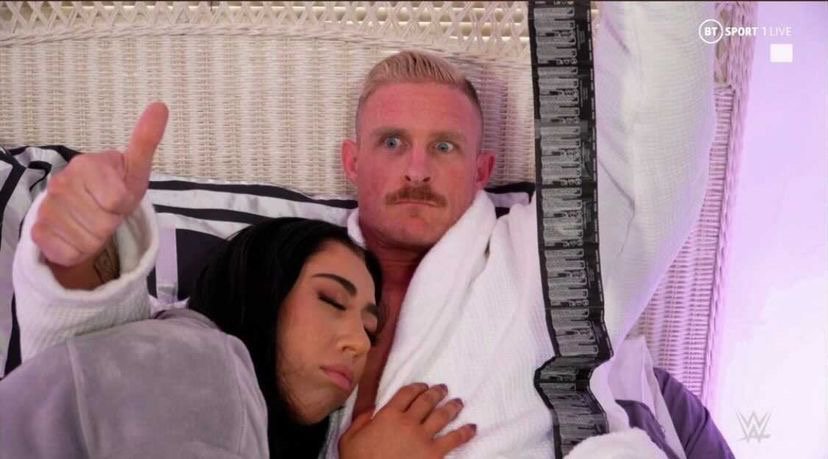 GOOD: Hit Row start out the show by cutting a promo. They hype up that the show is all about the ladies. They went over all the matches on the show & how there may be titles changes. B-Fab then said that she was going to beat Elektra Lopez. This was nice to open the show.

GOOD: Lopez defeated B-Fab in a no dq match, which relied heavily on weapons such as chairs, kendo sticks and trash cans. This match was good and didn’t go too long.

AVERAGE: Next up was a package of the honeymoon of Dexter Lumis and Indi Hartwell. They were enjoying themselves until Johnny Gargano, from afar, got too worried about them being too close and then pretended to be a shark in the water to scare them away from the water. This was what it was.

GREAT: Joe Gacy was shown in the ring for the second straight week, where he began talking about how the ring is a safe space. He said he made a huge impact last week and he has not been canceled. He said he made a bigger impact than guys like Ciampa, Strong or Breakker. Gacy said he speaks for a generation that people don’t understand except for the enlightened people. Gacy said he saw nothing but triggered faces last week, as he said he’s inclusive. He said all conflicts can be fixed through conversations and discussions. He said he will bring the world to a new normal. This promo made sense and this character is very over online.

GREAT SQUASH: Xyon Quinn defeated Oney Lorcan in a great squash match that made Quinn look like an absolute star.

AVERAGE: MSK had an interview next in the ring where they said they have accepted all challenges and that they are better than everyone. The Grizzled Young Veterans music then hit & said they need to get a shot. Carmelo Hayes and Trick Williams came out next and Hayes said he can cash in his contract whenever he wants. Zack Gibson said the line starts behind Grizzled Young Veterans. MSK seemed to want a shot again GYV & Josh Briggs and Brooks Jensen’s music hit. Briggs and Brooks started brawling with Hayes and Williams, which led to a quick four team brawl. This wasn’t bad, but it just felt like last weeks opening segment.

GREAT: An awesome promo package for Bron Breakker was shown next where he said that he isn’t here to make friends, he wants to win titles. Breakker is a star.

GREAT: Tomasso Ciampa was live via facetime next & responded to Breakker by saying it took him 908 days to get the title back. He said no one will beat him for it & that Breakker v Ciampa will happen sooner rather than later & that he will beat Breakker. This was great progression.

AVERAGE: The Honeymoon was back and Gargano snuck into Indi and Dexter’s room. When they returned, Gargano snuck into the closet. Indi and Dexter started having a kinda pillow fight, but what Indi was saying was implying that they were having sex & they fell asleep after. When Gargano tried to escape Dexter caught him and gave him a thumbs up. This was just not great.

GREAT: Roderick Strong defeated Grayson Waller in a great match to retain the Cruiserweight Championship. Waller looked so great in this match.

GOOD: Lashing Out with Lash Legend was next and she hyped up the Draft Friday. Legend says she has the record for lost rebounds in a game. Legend said that Andre Chase earned the Lash Out of the week for being annoying. This kinda worked.

GOOD: Kyle O’Reilly defeated Ridge Holland in a good match. Nothing much here, but this was solid.

GOOD: After the match, Dunne & Holland beat up O’Reilly until Von Wagner came in to help O’Reilly out of respect. This was good.

GOOD: Tony D’Angelo had another vignette after that & these have been great. He is debuting next week.

GOOD: After the match, Toxic Attraction came out & beat up The Robert Stone Brand and then Raquel Gonzalez, as Rose made it known she wants the NXT Women’s Championship.

This episode was not bad, as it was yet again about creating future stars like Dolin, Quinn and Boa. The women’s tag and the cruiserweight match both stood out among the rest as the two best of the night. Overall, this was a fairly enjoyable show to watch and was never boring.