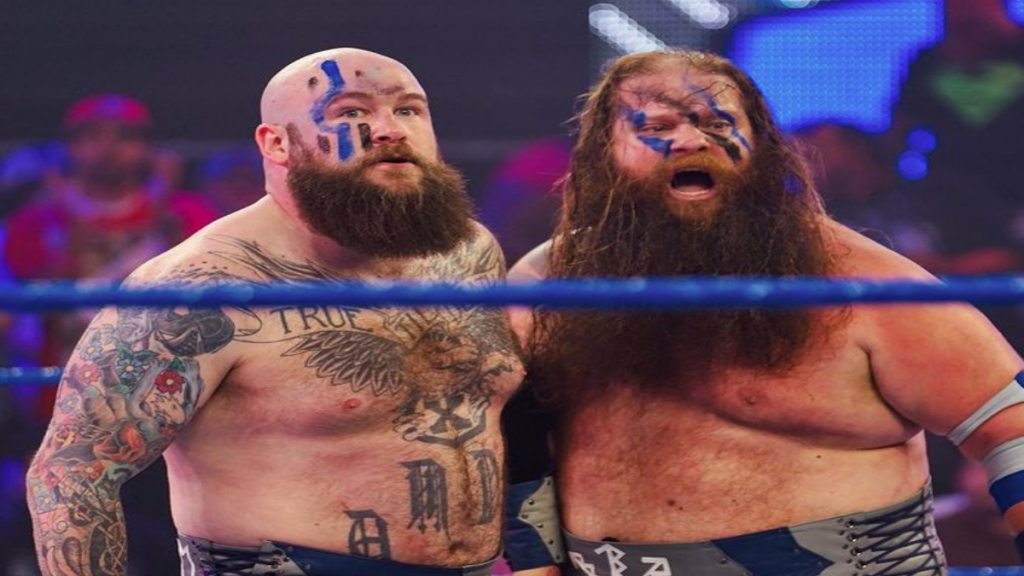 This week on NXT 2.0: Nikkita Lyons and Lash Legend face off in a rematch. Who will emerge victorious in the latest iteration of this heated rivalry? Solo Sikoa matches up with Trick Williams. Who will come out on top? The don of NXT, Tony D’Angelo, takes on Von Wagner. Will Tony D continue his dominance or will Robert Stone’s client prove himself to be the superior athlete? And a six-person tag team match between Fallon Henley, Josh Briggs, and Brooks Jensen take on Elektra Lopez, Joaquin Wilde, and Cruz Del Toro of Legado Del Fantasma. Will La Familia emerge with the victory? All this and a whole lot more!

GOOD: Nikkita Lyons vs Lash Legend. Legend came out swinging in this one, tossing Lyons head first out of the ring, and then throwing her into the stairs. It was not enough, however, as a swift kick by Lyons, combined with a side trip to suplex city, finished off Legend. Post-match, Natalya attacked Lyons from behind. This prompted Cora Jade into action, who came to the ring to help Lyons and swung her skateboard to chase off Legend and Natalya.

Disappointed with the lack of gold held by Diamond Mine, Roderick Strong announces to Brutus and Julius that he has arranged for a team of former champions, The Viking Raiders to face off with the Creed Brothers next week.

GOOD: Tony D’Angelo vs Von Wagner. D’Angelo dominated early on but Wagner turned things around in the picture-in-picture break, nearly finishing D’Angelo off with a spinebuster. While Joaquin Wilde and Cruz Del Toro distracted the ref, Santos Escobar hit Tony D in the back of the leg with a crowbar. After nearly being counted out due to the damage to his knee, Tony D received a big boot from Wagner to lose the match.

Toxic Attraction confronts Roxanne Perez, Indi Hartwell, and Persia Pirotta backstage. While Toxic Attraction says Jacy Jayne only lost because of the distraction from Wendy Choo, Perez challenges a member of Toxic Attraction to a rematch. Mandy Rose is next up against Perez.

GOOD: what was supposed to be Nathan Frazier’s debut in NXT 2.0 against Guru Raaj turned into a promo segment including Grayson Waller and Andre Chase. After Waller spent some time ripping on the esteemed Chase University and his former partner Sanga, Frazier hit Waller with a move from the top rope. Thus, making this a teachable moment for Grayson Waller.

Grayson Waller plotted his revenge on Nathan Frazier with the encouragement of Tiffany Stratton. Waller will face Frazier next week.

GOOD: Katana Chance and Kayden Carter vs Yulissa Leon and Valentina Feroz. Looked like Chance and Carter would end this one quickly but Feroz was able to make a much-needed tag. Feroz and Leon nearly stole this one by taking out Chance outside the ring but Carter was able to hold her own. In the end, Carter and Chance combined for a tandem finisher to secure the victory.

Backstage, Brooks Jensen is reeling backstage after someone attacked him in an effort to take him out of his match later in the evening.

In a brief video package, Kay Lee Ray announces she is rebranding herself with the name Alba Fyre.

GOOD: Fallon Henley and Josh Briggs versus Elektra Lopez, Joaquin Wilde, and Cruz Del Toro of Legado Del Fantasma in a six-person mixed tag team match. Brooks Jensen was unable to compete in this match due to the injury suffered earlier. After surviving early momentum by Briggs and Henley, Wilde and Del Toro looked to weaken the outnumbered team by attacking the knee of Briggs. Briggs was able to hold his own for a while but in the end, Legado Del Fantasma emerged with the victory. We learn during the match that Von Wagner took out Brooks Jensen in response to Jensen leering at Sofia Cromwell.

GOOD: Solo Sikoa vs Trick Williams. Just as Trick Williams was building momentum, a punch from Williams seemed to give Sikoa a jolt of energy. Sikoa turned things around quickly, hitting Williams with a Samoan Drop and a Frogsplash to secure the victory. In a preview of next week’s triple threat match, Solo Sikoa, Cameron Grimes, and Carmelo Hayes had a post-match confrontation.

In a video package, Wes Lee recounts his journey from winning the NXT Tag Titles to being stripped of the belts.

Tony D’Angelo expressed his anger at the attack by Santos Escobar earlier in the show. He also introduced his two associates.

GOOD: Roxanne Perez vs Mandy Rose. Rose spent the early part of this match trash-talking Perez, thinking this would be an easy victory. Perez used this against her, targeting Rose’s fingers with biting and throwing her hand into the stairs. Roxanne Perez gave the NXT Women’s Champion a run for her money but a running knee by Rose finished off Perez. After the match, Wendy Choo and Perez dropped a net on top of Toxic Attraction and shot silly string at them.

Another Women’s Breakout Tournament contender was announced. This time it’s a young lady by the name of Sloane Jacobs.

GREAT: Joe Gacy in the ring surrounded by a bunch of dark, hooded figures. Gacy talks about how he wants to bring his vision of acceptance to the world and become NXT Champion. Then, WWE Hall of Famer and the father of Bron Breakker, Rick Steiner came to the ring to confront Gacy. Steiner tells Gacy his son will defend the title. Bron Breakker then comes to the ring, taking out many of Gacy’s minions before he is taken out by Gacy.

Overall, a pretty good edition of NXT 2.0 with most matches being in the good category but none reaching the level of great. The big theme of this week’s episode was introducing new faces, as many new superstars were introduced for the Women’s Breakout Tournament, Kay Lee Ray has become Alba Fyre, Nathan Frazier debuted on NXT 2.0, and Roxanne Perez continues her impressive start in NXT with a close loss to the NXT Women’s Champion. Joe Gacy continues to be bizarre with his horde of hooded henchmen. Bron Breakker would not be intimidated, however, as he came to the ring to rescue his father from the predations of Gacy. courage would not be enough for Breakker, as he was blindsided by Gacy while trying to take out the hooded men. Lash Legend was unable to defeat Nikkita Lyons but did receive help post-match in the form of Natalya. Cora Jade’s assistance to Lyons sets up a tag match with her and Lyons against Natalya and Lash Legend. Tony D’Angelo was defeated by Von Wagner, but not without interference from Santos Escobar. Wagner made his presence known later in the show as his attack on Brooks Jensen meant Josh Briggs and Fallon Henley were outnumbered in their mixed tag match with Legado Del Fantasma. The battle for the North American Championship was previewed as Solo Sikoa had a run-in with Cameron Grimes and Carmelo Hayes after Sikoa defeated Trick Williams.