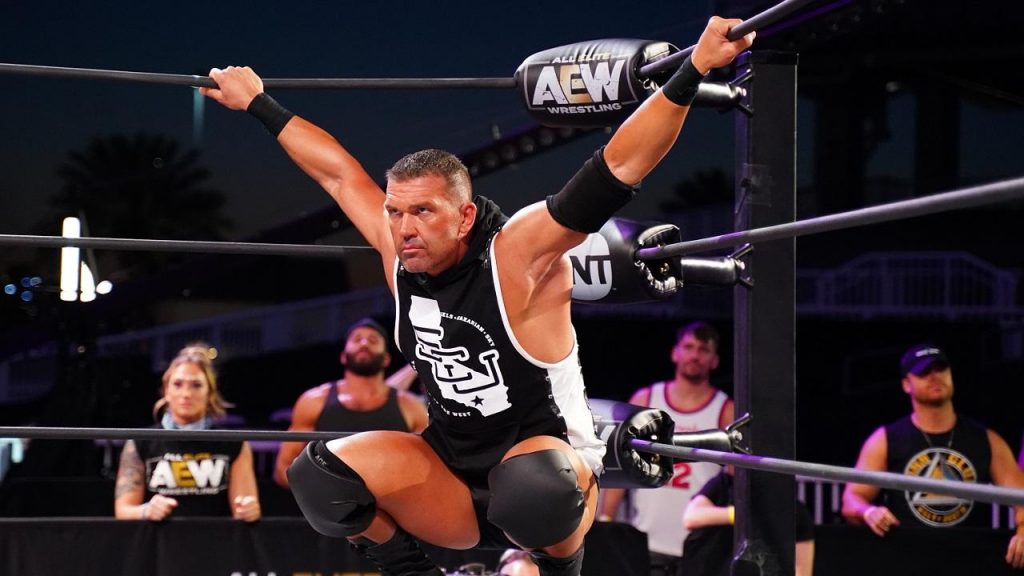 Preview: Rampage is on Long Island, New York, just like Dynamite was and we have a pretty sweet card on tap for tonight. Riho takes on Ruby Soho in an Owen Hart Foundation Women’s Tournament semi final match. Death Triangle will challenge The Butcher, Blade and Marq Quen in trios action. Shawn Spears will have a match as well, and Scorpio Sky will defend the TNT Championship against his former SCU partner Frankie Kazarian.

GOOD Death Triangle vs. Butcher, Blade and Marq Quen: Penta starts against Blade, and he starts quite quickly. He kicks Blade in the chest and then tags in Pac. Death triangle is off to a hot start. Butcher is brought in and he gives his side their first advantage of the match. Pac lands a shotgun dropkick to the knees of the Butcher to swing the momentum back in the direction of Death Triangle. Rey Fenix is brought in against Marq Quen, which ramps the pace back up. Quen has an opportunity against Fenix momentarily but Rey shows his veteran instincts and is able to score on a double stomp off the top turnbuckle. After a commercial break Fenix is isolated in the AFO’s corner. Pac is able to make the save but Blade and Marq Quen take out both him and Penta. The double team from Butcher and Blade on Fenix looks like the end of the match but he kicks out at 2. Fenix hits a spinning heel kick on blad that allows him to bring Penta Oscuro into the match. Penta hits a springboard ddt that is absolutely incredible and then brings in, “The Bastard,” Pac. Marq Quen is by himself in the ring and Penta and Fenix hit the Fear Factor before landing double dives on Butcher and Blade. Pac connects with the Black Arrow and that is the end of this one. Death Triangle had some trouble early but looked dominant in the end in what was an exciting opening match. Immediately following the finish the lights turn off and the House of Black are in the ring with Death Triangle when they come back on. They shut off a second time and the House of Black is gone.

SQUASH Shawn Spears vs. Bear Boulder: Boulder is already in the ring when Spears makes his entrance. The Long Island crowd is about as quiet as I’ve heard them over these last few shows. Boulder is all over Spears out of the gates but the crowd isn’t overly concerned. Spears uses a thumb to the eyes and then a C-4 to win the match. Spears yelled Wardlow’s name before delivering the move and then he goes and gets a chair to further establish his dominance. This was ok for what it was, a very short offensive burst from Boulder followed by the finish from Spears.

GOOD Riho vs. Ruby Soho: Soho is incredibly over with the fans, she got a huge pop as she made her entrance. Riho has the early momentum until Soho lands a back elbow followed by a mayorama. Soho is on her game tonight as usual. She climbs the top turnbuckle and tries a dive, Riho evades and Ruby tweaks her knee. Riho delivers a northern lights suplex and climbs to the top turnbuckle. Soho recovers and stuns Riho with a headbut. Riho retaliates and then follows with a crossbody and a crucifix bomb. Somehow it’s not enough and Ruby lands a backdrop driver followed by a superkick and a Blade Runner. The Blade Runner is finally enough and that was a fast paced awesome match.

Gunn Club and Acclaimed backstage promo: We get a discussion about hand gestures and the future of their faction. This is a funny but not rateable segment.

GOOD Jade Cargill in ring interview: Jade is accompanied by The Baddies as well as Mark Sterling. There’s also a whole section of Baddies in the front row as well. Red Velvet’s opponent Hikaru Shida is injured and can’t compete in the Owen Hart Foundation Tournament anymore. Sterling suggests that Velvet wins by forfeit but that will not be the case. Her new opponent for next Friday is Kris Statlander! She’s back and this will be one heck of a match.

GREAT Frankie Kazarian vs. Scorpio Sky: Kazarian and Sky trade traditional wrestling holds in the middle of the ring to start and these two veterans can definitely go. It’s weird calling Sky a veteran but he is just that at this point. Kazarian tries to work the arm and Sky shows what he’s learned while training with American Top Team. This is one of the most even matchups I’ve ever seen in my life. Frankie lands a huge lariat but this could go either way. Chris Jericho has done the best he ever has on commentary in my opinion. Sky attempts the TKO but Kazarian has it scouted and is able to score with his signature springboard leg drop. That is enough for a two count and then Frankie follows with a huge cutter. As Kazarian locks up the crossface chickenwing Dan Lambert makes his way to the ring and distracts the referee. Ethan Page drills Kazarian over the back of the head with the TNT Title belt and Frankie is barely able to kick out. Sky gets him up for a TKO though and that is enough to retain his title. Post match Sky is not happy with Page and Lambert for interfering, or is he? Scorpio smashes his former SCU partner over the skull with the title belt to solidify himself as a heel. That was definitely an exciting main event and a fun way to end Rampage.

Overall: Dynamite was definitely going to be tough to follow and this show suffered from having to follow such a loaded card on Wednesday night. Scorpio Sky and Frankie Kazarian was definitely an exciting main event. Multiple storylines were further as we get closer to Double or Nothing. Death Triangle and House of Black may have been the most intriguing segment of the night as they stared each other down. Shawn Spears won a squash match as he looks forward to his showdown with Wardlow. Ruby Soho advanced in the Owen Hart Foundation Women’s Tournament. Oh yeah, Kris Statlander is the replacement for Hikaru Shida in that same tournament!