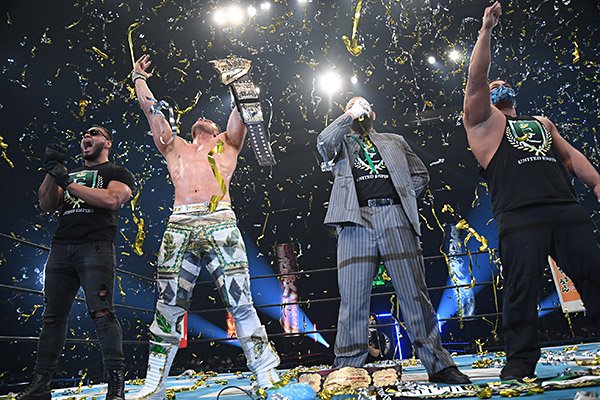 A decent Day 1 happened yesterday with an emotional moment from Suzuki Gun and an amazing Never Openweight Showdown. NJPW continued their tour called Wrestling Dontaku 2021 in a rough start. They announced a couple changes for the show. They pulled the IWGP Junior Heavyweight Title Bout and a 6 Men Tag between members of Suzuki Gun and a couple members of CHAOS. However, NJPW is ready to give the wrestling fans a guaranteed bangers in the main event where Will Ospreay defended his IWGP World Heavyweight Title against The Dragon, Shingo Takagi.

AVERAGE: We started the show with a 6 men tag team bout between Suzuki Gun (ZSJ, Taichi & Douki) and Bullet Club (G.O.D & Jado). This was overall a decent match between these two tag teams. ZSJ made Jado tapped out to his own submission. Suzuki Gun picked up the win!

GOOD: After the match ended, Dangerous Tekkers gave the last warning to G.O.D that Tekkers will end the war when they finally take the IWGP Tag Titles from G.O.D.

AVERAGE: Up next we got the Bullet Club coming out with their original theme and it was the team of Taiji Ishimori & Yujiro Takashi. They took on the team of Master Wato & Hiroyoshi Tenzan. Ishimori & Yujiro made a really good team here after they outsmarted Wato’s strategy to beat both of the members of Bullet Club. Taiji Ishimori pinned Master Wato after he delivered the Bloody Cross to Wato.

GOOD: Another 6 Men Tag Team match between United Empire & Los Ingobernables de Japon is in the book. This match happened many times in the Road to Wrestling Dontaku shows but it always ended up being really good. United Empire told the universe that they are a dominant stable. The match also ended with a similar version of the past matches where Jeff Cobb delivered the tour of the islands to pin BUSHI.

AVERAGE: Up next, we got another 6 men tag team match in the book where the team of Hiroshi Tanahashi, Toru Yano, and Ryusuke Taguchi took on Bullet Club (Jay White, EVIL & Dick Togo). This was overall a fun tag team bout. Both teams gave so many fun spots in this showdown to entertained the crowd before the main event. Toru Yano pinned a blindfolded Dick Togo with a Roll-Up following a low blow.

AVERAGE: After the match ended, White told Tanahashi that he won’t give him a rematch for the NEVER Openweight Title. Jay White then said to Ryusuke Taguchi that he would get a shot if he wanted.

PERFECT: It’s time for the main event!!! We got the leader of the United Empire, Will Ospreay, defended his IWGP World Heavyweight Title against The Dragon, Shingo Takagi. Man, these two competitors never disappoints when they have a match together. The in ring psychology and the chemistry between these two wrestlers are better than top notch, they kept finding new spots after new spots every time they have a match. That MADE IN JAPAN through the table spot might be the best spot in Pro wrestling this year. Ospreay successfully defended the IWGP World Heavyweight Championship with the Storm Breaker to Shingo following a Rainmaker and a hidden blade.

GREAT: Ospreay took the mic and thanked Shingo after being the first person to get beaten in Ospreay’s first defense. Ospreay then bragged about being the only one the company leans on for selling tickets. Ospreay then said that he is out for redemption and will avenge his WK15 loss when he faces Kazuchika Okada as his next challenger on May 29 in the main event of “Wrestle Grand Slam in Tokyo Dome”

RESULT – Will Ospreay retained his title via Pinfall

This tour ended perfectly after an awesome bout between Ospreay & Shingo. Overall Day 2 was decent in the undercard matches but the main event saved the show from boredom. The removal of the IWGP Junior Heavyweight title match kinda ruined Night 2 since the match would’ve been so good and amazing. Wrestling Dontaku 2021 overall was a decent tour with 2 Amazing matches. The undercard of the two nights was decent and both shows didn’t really have that exciting plot twist.