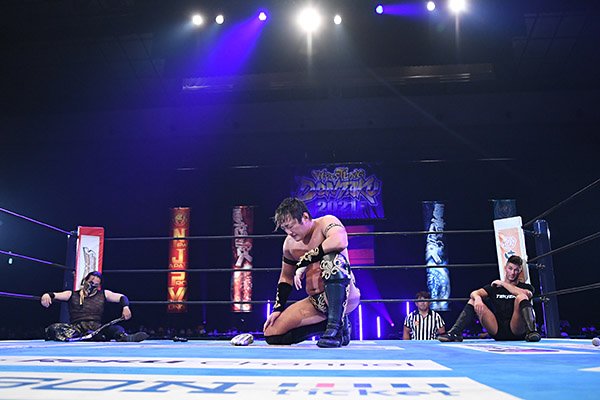 After a really good build of Wrestling Dontaku 2021 from their Road to PPV shows, and their mini ppv called “Satsuma no Kuni” last week. NJPW started their steps with their historical PPV, Wrestling Dontaku, with two singles matches in the tag team scene, and an anticipated NEVER Openweight showdown between the two biggest superstars in their division.

AVERAGE: In the first match of the night, we got an 8 men tag team showdown between the team of Hiroyoshi Tenzan, Master Wato, Tiger Mask IV & the KOPW 2021 Trophy Holder, Toru Yano and the Bullet Club (EVIL, Dick Togo, Taiji Ishimori & Yujiro Takahashi). Overall this was a fun tag team action that gave a really good showing from Tiger Mask IV in his 50s. A big win from Bullet Club after Taiji Ishimori delivered the “Bloody Cross” to Tiger Mask IV to picked up the win.

GOOD: After the match ended, Bullet Club celebrated their 8th Anniversary with their original bullet club theme which is a feel good moment for the fans.

AVERAGE: We then got a 6 men tag team action between CHAOS (Kazuchika Okada & IWGP Jr. Heavyweight Tag Team Champions “Roppongi 3K”) and SUZUKI GUN (Minoru Suzuki,IWGP Jr.Heavyweight Champion El Desperado & Yoshinobu Kanemaru). This match went decent as expected between the two teams with YOH going over in this match to show the IWGP Jr.Champion, El Desperado, that he’s ready to take the title from him. YOH delivered the DIRECT DRIVE to pinned Kanemaru and win the matchup.

GOOD: After the match ended, YOH & Desperado had a brief altercation and a little bit of trash talk ahead of their Junior Title match tomorrow on Wrestling Dontaku Day 2.

GOOD: UNITED EMPIRE & Los Ingobernables de Japon had another 8 men tag team showdown after their bout before at Satsuma no Kuni last week. The Empire & LIJ were going at it because this was a fast paced tag team action. SANADA beat Aaron Henare after he countered the Streets of Rage and pinned him with an O’Connor Roll into a Bridge.

GOOD: After the match ended, Ospreay and Takagi both teased hitting their finisher in an awesome way and make the crowd excited for their IWGP Title match tomorrow on Wrestling Dontaku Day 2

GOOD: The “Submission Master” Zack Sabre Jr then took on the one half of the IWGP Tag Team Champion, Tanga Loa, for a tag team title shot. ZSJ & Tanga Loa had a really good chemistry together as both of them kept hitting their best moves to end the match. This might also the best Tanga Loa singles match in his career. ZSJ earned the tag team title shot after he countered the Apeshit Driver and pinned Loa with a Crucifix.

POOR: It’s time for the Iron Finger of Hell Ladder Match. Taichi took on Tama Tonga in a feud that lasted for a long time. Honestly this match was disappointing from the start to the end. It was a slow paced match in a bad way, because both of the competitors kept trying to had a cool spot with the ladders but it ended up badly. The outside interference in this match was also unnecessary and it made the match worse than it could be. Tonga wanted the Gunstun off the ladder, but Taichi hung on, the move backfiring as Tonga crashed through the table; Taichi retrieved the Iron Finger with a yell of “Lizuka!!” to end the match.

GREAT: Taichi had an emotional promo about Takashi Lizuka and told the staff to played Lizuka’s music for the last time. As Takashi Lizuka’s entrance theme played, a chapter in NJPW finally ended.

RESULT – Taichi wins after retrieving the Iron Finger of Hell

MUST WATCH: For the main event, we got the Ace of the Universe, Hiroshi Tanahashi, defended his NEVER Openweight Title against The Switchblade, Jay White. This match went under 40 minutes with Tanahashi & White were trying to tapped each other out. The chemistry between these two competitors was really good, especially the storytelling that told in this match was top notch. Jay White picked up the win when he countered a Tiger Suplex attempt and pinned Tanahashi with the Blade Runner. Jay White becomes the new NEVER Openweight Champion.

Overall this PPV was a mixed of good & bad things. The goods in this PPV were that we got an awesome main event for the NEVER Title and a couple of good storyline progress for tomorrow’s show. However the bad in this PPV was the ladder match, even though the ending was emotional, this match was slow and boring. With that being said, I hope Day 2 is better than Day 1 night and get more goods rather than bad because the card on Day 2 looks a little bit better than Day 1